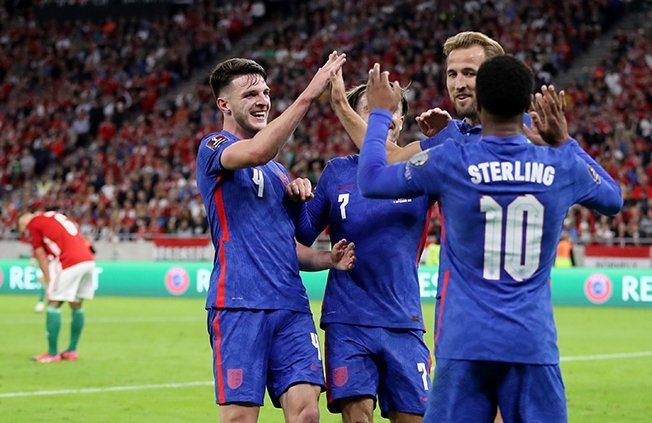 England moved five points clear at the top of World Cup qualifying Group I after a comfortable 4-0 win over Hungary at the Puskas Arena on Thursday.

Raheem Sterling put England ahead in the 55th minute, after a frustrating first half, slotting home a low pull-back from Mason Mount.

Sterling was the provider for England’s second eight minutes later, when his deflected cross was headed in by a stooping Harry Kane.

Harry Maguire made it 3-0 in the 69th minute with a header from a Luke Shaw corner and Declan Rice added the fourth with a shot from outside the box which got through the body of keeper Peter Gulacsi.

Hungary, already facing two games behind closed doors in UEFA competition after incidents at their national stadium during Euro 2020, could face sanctions from FIFA after fans threw objects at England players on two occasions.

Romelu Lukaku scored twice as Belgium overcame an early scare to crush Estonia 5-2 away on Thursday and solidify their position at the top of World Cup qualifying Group E.

Lukaku’s extended his scoring record to 66 goals in his 99th appearance for his country after Belgium were shocked when Estonia captain Matthias Kait stole away the ball in midfield and thundered home a powerful shot to put the home side ahead in the second minute.

But FIFA’s top-ranked team fought back to move to 10 points from four group matches while Estonia are bottom after losing their opening three games.

Sweden bounced back from conceding an early goal to surprise Spain and emerge with a 2-1 victory in their World Cup qualifier on Thursday to take control of Group B.

The game was barely five minutes old when Spain debutant Carlos Soler put the visitors ahead with a smart half-volley from Jordi Alba’s cross.

The lead did not last long as a minute later Alexander Isak, who plays in Spain for Real Sociedad, capitalised on Sergio Busquets’s error on the edge of the box to equalise.

Both sides had chances before Viktor Claesson latched onto Dejan Kulusevski’s centre to fire the winner after 57 minutes.

New Germany coach Hansi Flick got his reign off to a winning start as Timo Werner and Leroy Sane scored in a 2-0 win over Liechtenstein in their World Cup Group J qualifier on Thursday, but once again the Germans struggled in front of goal.

It took 41 minutes of complete dominance before Werner finally got the first goal of the Flick era, latching on to a superb pass from Jamal Musiala before slotting the ball home with his right foot.

Liechtenstein continued to frustrate the Germans until the 77th minute when Sane was finally rewarded for his industry, dancing to his left in the box before rattling a low shot in at the far post to make, but the Germans will be deeply unhappy that their dominance did not lead to more goals.

Having suffered a shock loss to North Macedonia in March, the Germans are second in the group on nine points after four games, one behind leaders Armenia. Liechtenstein are bottom with no points and one goal scored with 12 against.

Our View: Anastasiades keeps digging a deeper hole for himself