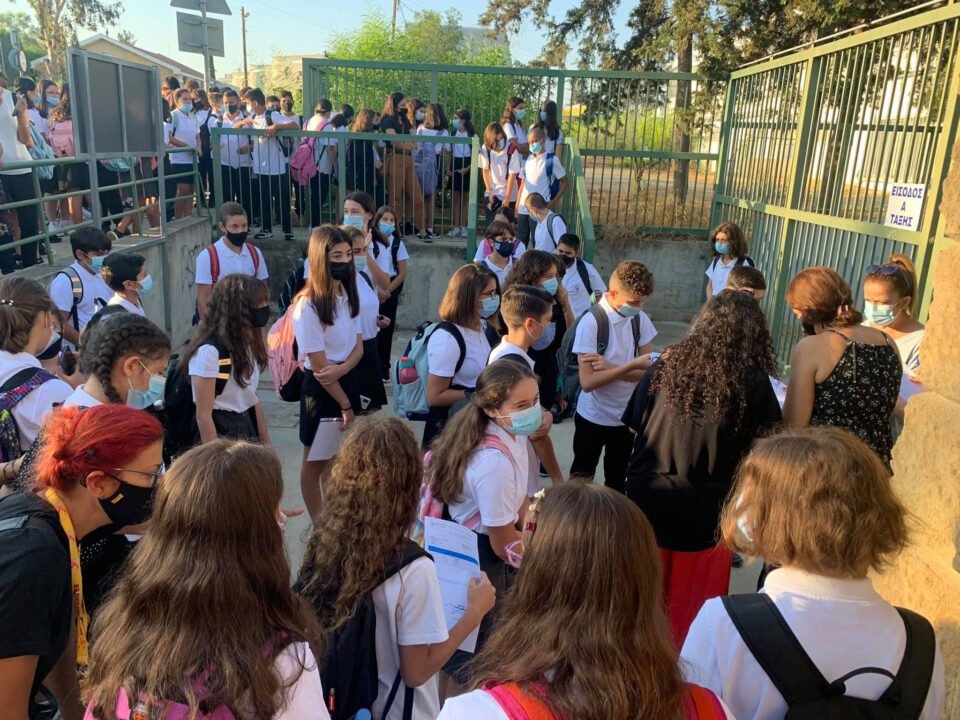 Yet another school year amid the Covid pandemic kicked off on Tuesday with minor problems and old ‘customs’ involving flares and firecrackers.

Over 45,000 pupils returned to school on Tuesday under strict measures to combat Covid-19, including the requirement of a SafePass for those over 12.

Education Minister Prodromos Prodromou visited the Acropolis high school on Tuesday morning and was expected to visit the high school of Paliometocho later in the day.

He said problems mainly concerned SafePass checks but that was expected on the first day.

Prodromou said that there might be walk-in vaccination centres in schools to further boost the vaccination programme.

“We know the rules we have to follow. In addition, we now have the vaccine to fight the pandemic. As long as we can be vaccinated, we minimise the risk of spreading covid and the school can function efficiently,” Prodromou said in a message read in all schools.

“This year we operate with SafePass. Health measures are important, but our main purpose remains education,” he added.

Officials said rapid testing units will be operating in schools every three days.

Petros Chrysostomou, the chairman of the Larnaca school board told the Cyprus News Agency that no problems were observed in the district.

“Yesterday, I contacted the Larnaca police chief to provide extra patrols in the city’s schools, while the school district also contacted a private security company, requesting more checks at night, to avoid any incidents related to the back-to-school custom,” he said.

Secondary school teachers’ union (Oelmek) head Kostas Hadjisavvas told the CyBC that there are still some issues that need to be solved such as the lack of single desks and air conditioning.

Hadjisavvas said that the union had also requested a meeting with the minister on the issue of pupil evaluations through the four-monthly exam model.

According to the ministry, a total of 113 secondary schools, of which 63 gymnasiums, 38 lyceums, and 8 six-grade schools, including Rizokarpaso gymnasium, will operate during the 2021-2022 school year.

Five evening secondary schools will also be in operation. Registrations will be completed in the middle of September.

Technical schools will be staffed with about 675 teachers while 4,720 students will attend.

Two years jail for cannabis possession and intent to sell