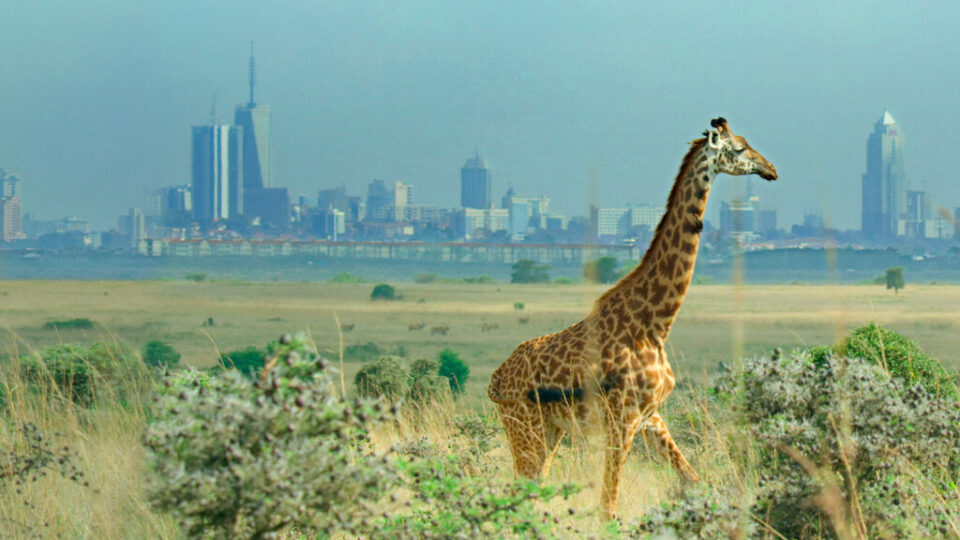 The blue planet, planet earth, is unique to our solar system and, given our current state of technological progress, it is the only planet known to us where we can live.

’The overview effect’ is often expressed by those who have been in space, which is described as an awe inspiring and self-transcendent experience which remains with the astronaut for many months or even their lifetime (while I was studying engineering, one of my professors had the opportunity to go to space and came back a changed man).  This experience of seeing the blue planet from space had changed them to the core. Their views of boundaries, politics, land ownership, and locality were challenged by the realisation that the planet really exists as an enclosed biosphere bounded by the upper atmosphere, the geology, the ocean depths and a thin layer of rock and soil that supports most life on the planet.

The evolution of this biosphere is around 3.5 billion years old, and just within the last 800 million years, we have had eight ice ages and five mass extinction events, however, in the last 11,700 years or so, the climate has stabilised to a rare and comfortable interglacial period scientifically known as the Holocene Epoch (from the Greek words ὅλος (holos, whole or entire) and καινός (kainos, new), meaning “entirely recent”. We went from experiencing extremes of up to +/- 10C over a decade, to +/- 1C over an 11,000-year period, meaning a stable sea level, and predictable weather patterns.

As the glaciers retreated to two permanent ice caps (that are key to regulate global temperature), this opened up more expansive landscapes for humans to evolve in, which, combined with the relatively higher atmospheric concentration of carbon-dioxide allowed all species to thrive, and changed our habits as hunter-gatherers to permanent settlers, who developed agriculture domesticated animals, and led to the rise of civilisations (Greeks, Romans, Mayans, etc).

This evolved to a growth in human population never seen before on the planet, who have been changing the functionality of the planet, especially in the last 300 years or so. It took 2 million years for the global human population to reach 1 billion, and since then only 200 years to grow to 7.8 billion.

Somewhere along this line, we also shifted from the Holocene Epoch into the Anthropocene Epoch (some argue it was in the advent of the industrial revolution, others feel it is around World War 2 when major mining, and chemical use started). Today, most scientists agree that human activity is now the driver of earth systems and cycles; for example, 75 per cent of the Earth’s land surface has been significantly altered by human actions, 50 per cent the world’s habitable land is used to grow livestock, more than 50 per cent of  the oceans are actively fished, more material from the lithosphere (earth material) is being moved than ever before (way beyond the earth’s natural geological cycle), and around 50 years ago we pushed the average global temperature 1C outside the ‘normal’ average since the dawn of civilisation.

But can we identify the systems that keep the planet in check? Can we identify a quantitative point from which we would risk triggering non predictable changes? Are there tipping-points that would commit the planet to a new state of irreversible change?

The Stockholm Resilience Centre (a joint initiative between Stockholm University and the Beijer Institute of Ecological Economics at the Royal Swedish Academy Sciences) has been working with scientists around the globe for decades in order to answer these very questions. 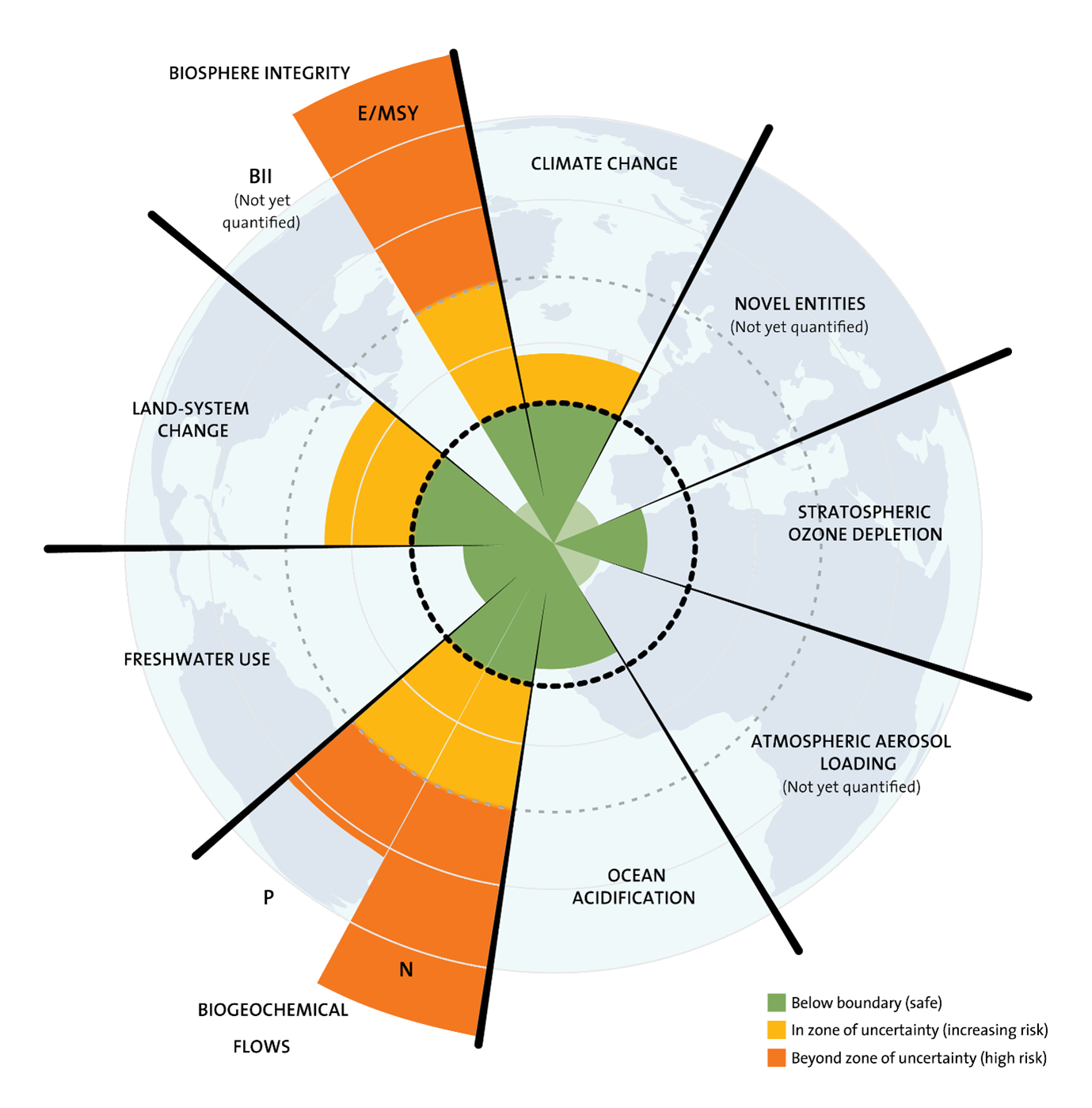 A summary of these boundaries:

Climate Change: at the start of the Holocene, the atmospheric concentration of CO2 was +260 ppm. The low risk was set at 350ppm, a value which was measured during the period the global temperature fluctuation was stable, with an uncertainty range between 400ppm (low risk) to 450ppm (high risk; with the effect of a 1.5C global rise in temperature). Today we are currently at around 415ppm reflecting a 1.1C rise in average global temperature. Beyond the 450ppm we risk pushing tipping points that would incur irreversible change with no possibility of return to ‘normal’.

Land system change (biomes): modern agriculture is the biggest driver of land use change. It currently uses about 50 per cent of habitable land on the planet. For example, in Brazil alone, we have already lost about 20 per cent of the Amazon forest (7 million km2), a loss about 750 times the total land area of the island of Cyprus.

Biosphere integrity: this focuses on two aspects; the role of genetically unique material and the role of the biosphere in Earth-system functioning. The world has seen an average 68 per cent drop in mammal, bird, fish, reptile, and amphibian populations since 1970; this is already a sign of a 6th mass extinction event.

Freshwater use: although still not critical in use, the distribution and access are imbalanced, and with a rapidly growing population, this can rapidly change. 25 per cent of all rivers no longer reach the ocean, which is another unsustainable impact.

Biogeochemical flows: currently the major influencers are Nitrogen (coming from industry and agriculture) and Phosphorus (almost entirely from fertilisers); more elements are to be added.

Ocean acidification: atmospheric CO2 has increased the hydrogen ions in the sea by 30 per cent which ultimately lowers the ability for many marine species to form calcium carbonate, the building blocks for skeletons and shells of many marine organisms.

Stratospheric ozone depletion: steady for about 15 years and expected to improve due to phasing out of ozone-depleting substances; an example whereby humanity has taken effective action to return the process back to within the boundary.

Atmospheric aerosol loading: particulate air pollution is responsible for about 7 million deaths annually, and scatters light, cooling the planet, that has a masking effect, reducing about 40 per cent of the actual state of global warming. The boundary has still not been quantified.

Novel entities: nuclear waste, micro plastics, heavy metals, and so forth… still not quantified and the impact is still unknown.

A recent documentary entitled ‘Breaking Boundaries: The Science of Our Planet’ (narrated by Sir David Attenborough) presents these boundaries in a wonderful way. 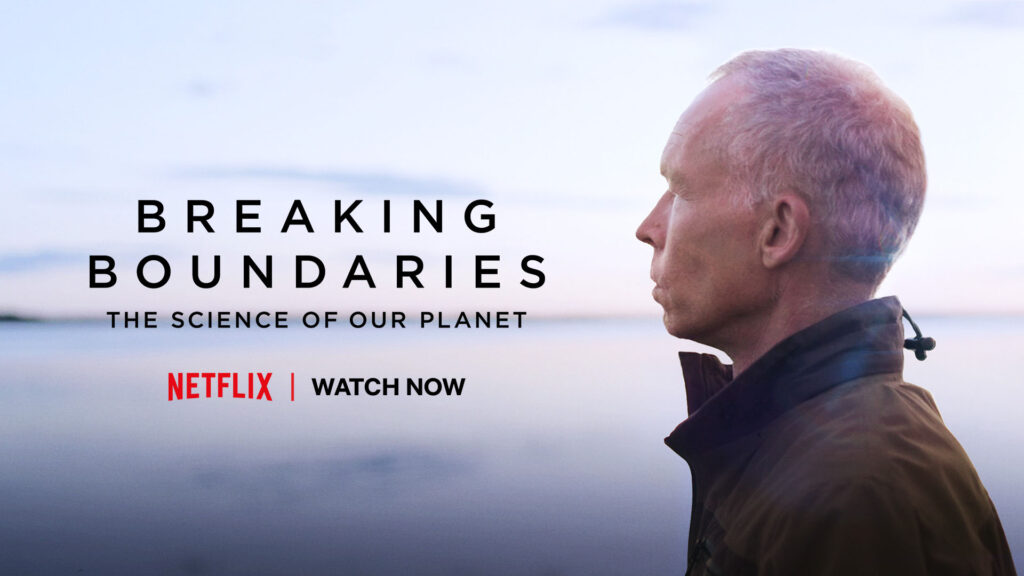 According to IPCC (Intergovernmental Panel on Climate Change), we have only about a decade to transition from ‘business as usual’ and to turn things around towards a ‘sustainable economy’. If we don’t we will be facing drastic changes, such as potentially, by 2035, having the inability to grow food during the summer in Europe, Asia, and north America, as one example.

All this science leads us to ask the question; is it possible for us to live on the planet, with the expansion to 9-10 billion in population, and still live within these boundaries?

Actually, we ought to rephrase this… for us to live on a planet that is agreeable to live on, we MUST find way to live within these boundaries, and in harmony with nature. It is not a question.

For some, this may sound uncomfortable, however this is actually an exciting time. What will the next industrial revolution be, and will it be based on principles rather than profits? What could education look like? What should business schools teach and what new forms of work will there be? How can governments change their funding/subsidies priorities and laws? In my next article, we will define what sustainability is, and how we can work with it in order to ensure we are moving toward a more positive impact on our blue planet.

Roberto Sciffo is the CTO of ISA Energy, an innovative project development company with a focus on sustainability and inter-sectoral decarbonisation. Roberto has a varied background from engineering and biological medicine, environmental systems, integrated economies and systems thinking