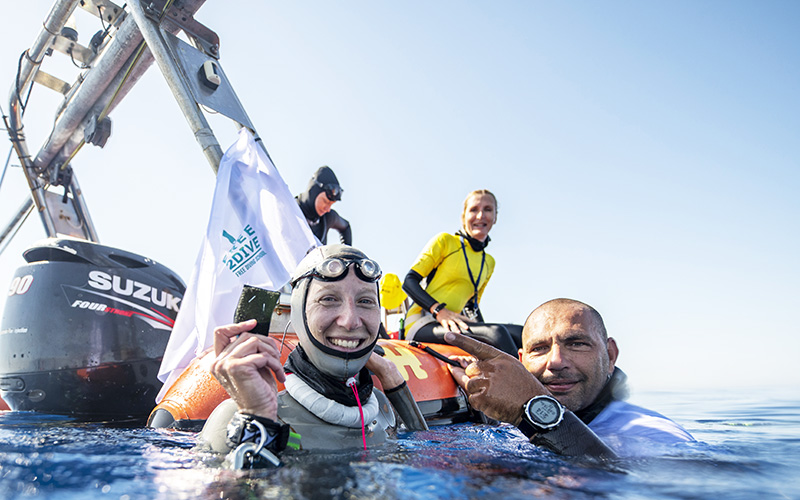 The World Freediving Championships will be held next week in Limassol. ALIX NORMAN finds out why Cyprus has been chosen to host, who will be setting new records, and how to watch each dive live online

In July, Jennifer Wendland set a world freediving record just off the coast of Limassol. And in less than a week, the German prodigy will be back in Cyprus once more, joining 130 athletes from 39 different countries – all of whom will be attempting to better their best in the world’s premier freediving competition.

Held every second year in the sea (and in between, in the pool), the AIDA World Championships are a huge deal in the freediving community; a chance for intrepid athletes to prove their skills at depth and in open water. So it’s hats off to Cyprus – and host organiser Savvas Savva of local freediving school Free2Dive – for securing the 2021 event! 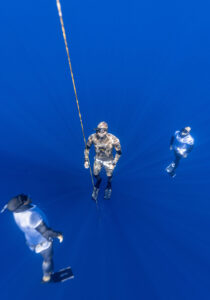 “The last depth Championships took place in Nice, in 2019,” says Sasa Damnjanovic, a member of the organising team and representative of the AIDA Board. “The 2020 pool championships were a bit of bust thanks to corona, but the competition is back this year for its 27th iteration, and we’re so proud to be hosting it in Limassol, a city that has always been synonymous with the sea.

“Cyprus,” she adds, “has a long history of big international freediving competitions. In fact, the World Championships were held here once before, in 2015 – an event which saw many a new world record. It was a great experience for the athletes, and really furthered the sport of freediving on the island, so we’ve been waiting since then for the chance to do it all again, and are incredibly excited to have been chosen as the 2021 destination.”

Up against Roatan in Honduras, Limassol was the ultimate winner due to its many advantages, says Sasa. “Our diving conditions are ideal: a long swimming season in calm, warm waters; good visibility; and no strong currents. There’s easy access to the depths the sport requires – it’s just a 7-minute boat ride out to depths of 150 metres – and we have excellent access to medical facilities here. We also enjoy a great location at the crossroads of Europe, Africa and Asia; benefit from the past event organising experience of host Savvas Savva, who has represented Cyprus in 15 World Championships as either an athlete or judge; and have really good freediving infrastructure. And we mustn’t forget,” she adds, “the Cyprus hospitality, and the support we get from our sponsors, the Deputy Ministry of Tourism, Limassol Municipality, and EDT offshore.”

Although the decision to host in Cyprus came fairly late – “the global pandemic meant we weren’t even sure until late May whether there would be a World Championship at all!” Sasa reveals – the committee have managed to pull everything together in time for the September 20 deadline. It’s an effort which has included weeks of backbreaking work: setting up dive sites; arranging hotels and transport for the athletes; putting together judging committees and medical teams; sourcing safety divers, platform coordinators, and line handlers; and obtaining all the equipment needed for each dive.

“It certainly hasn’t been easy,” says Sasa. “But it will absolutely be worth it for the competitors. And also for those who want to watch,” she adds. “Because this year, we will be streaming each dive live on the AIDA YouTube channel through the use of underwater drone technology. So every second of every dive in every category will be available for viewing!”

Over ten days, athletes will compete in four depth disciplines: Constant Weight (in which the diver attempts to descend to a targeted depth using only fins or monfins, and their arms); Constant No Fins (in which any propulsion aids other than the arms or legs are strictly prohibited); Constant Weight Bifins (in which only bifins and arms may be used); and Free Immersion (in which the diver attempts to reach a targeted depth by pulling on the guide rope).

In the weeks leading up to the competition, the Cypriot athletes have been joined in their training by many of the foreign competitors, who have flown in early to adjust to the local conditions. Or merely to escape Covid restrictions in their own countries…

“In open water, there are hundreds of elements which can influence each dive,” Sasa explains. “Anything from the temperature of the water, to the thermocline, the salinity… And each athlete needs to spend time prior to the competition to bring their strategy, buoyancy and dive routine in line with local conditions. Also, many of the freedivers are still prohibited from training at home due to Covid restrictions, so they’ve arrived in Cyprus early to take advantage of the training opportunities.

“We’ve actually been welcoming competitors since early August,” says Sasa. “The team from Taiwan and representatives of Hungary and Morocco were amongst the first to arrive and, as they gathered at the departure point each morning, have garnered more than a few curious looks from beach-goers! And as more and more of the athletes landed in Cyprus, we’ve been seeing a wonderful exchange of cultures, experiences and ideas.

“Already, as they train every day and familiarise themselves with our seas, many have achieved personal bests! So and we can’t wait to see the new world, international, and national records that will be set at the AIDA World Championships, right here in Cyprus in 2021!”

The Aida World Championships will take place from September 20 to 30. To view the dives live online as they happen, visit the ‘AIDA Freediving’ YouTube channel