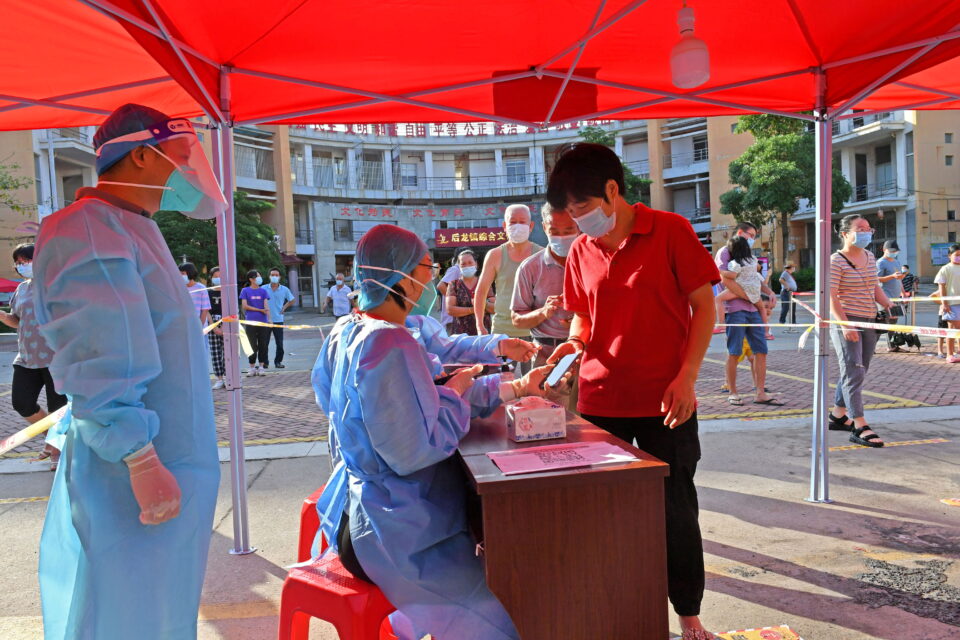 New local COVID-19 infections more than doubled in China’s southeastern province of Fujian, health authorities said on Tuesday, prompting officials to quickly roll out measures including travel restrictions to halt the spread of the virus.

The National Health Commission said 59 new locally transmitted cases were reported for Sept. 13, up from 22 infections a day earlier. All of them were in Fujian, a province bordered by Zhejiang to the north and Guangdong to the south.

In just four days, a total of 102 community infections have been reported in three Fujian cities, including Xiamen, a tourist and transport hub with a population of 5 million.

The infections come ahead of the week-long National Day holiday starting on Oct. 1, a major tourist season. The last domestic outbreak in late July to August disrupted travel, hitting the tourism, hospitality and transportion sectors.

Fujian’s outbreak began in Putian, a city of 3.2 million, with the first case reported on Sept. 10. Preliminary tests on samples from some Putian cases showed patients had contracted the highly transmissible Delta variant.

The virus has since spread south to Xiamen, which reported 32 new cases of community transmission for Sept. 13 compared with just one infection a day earlier.

“The Putian government is a big client of ours,” said a staff at a Xiamen building survey firm, declining to be named.

“About half of our company went to Putian last week. They are now isolated at home, while the rest have gone to do their Covid tests.”

Like Putian, Xiamen has locked down some areas of higher virus risk, cut offline classes at kindergartens, primary schools and high schools, closed public venues such as cinemas, gyms and bars, and told residents not to leave the city for non-essential reasons.

The first patient in the Xiamen cluster was a close contact of a case in Putian, Xiamen authorities said late on Monday.

Known for its mild weather and a laid-back lifestyle, Xiamen is a popular tourist destination domestically.

The Xiamen Gaoqi International Airport is also a key transportation hub linking the Yangtze and Pearl River Delta. About 60% of flights to and from Xiamen were cancelled on Tuesday, according to aviation data provider Variflight.

Both Putian and Xiamen began city-wide testing for the coronavirus on Tuesday. The cities, however, are yet to announce tough city-wide lockdowns as seen in early 2020 in China.

One district in Quanzhou, where many of the cases work in or have visited Putian, has halted bus services, shut some public venues, suspended dining at restaurants, and required residents to avoid unnecessary trips out of the district.

“One wave after another,” said a bank manager in Xiamen. “It feels like the new normal now.”

Prime Minister Jacinda Ardern asked New Zealanders on Tuesday to get vaccinated as soon as possible, as it was the only way to beat the spread of coronavirus and see curbs lifted in the biggest city of Auckland.

Tuesday’s 15 new infections in New Zealand were a drop from Monday’s figure of 33, but about 1.7 million people will stay in lockdown in Auckland until next week, as the government battles to hold down a cluster of the highly infectious Delta variant.

“The vaccine is the best tool we have in our toolbox and our ticket to greater freedom,” Ardern told a news conference. “The more people who are vaccinated, the fewer restrictions you have to have.”

Auckland’s lockdown has shut schools, offices and public places, with people allowed to leave home only for exercise or to buy essential items. In the rest of the country, the lockdown was lifted last week.

New Zealand had been largely virus-free for months until a Delta outbreak forced a snap lockdown on Aug. 17. It has infected 970 people so far, most of them in Auckland.

The lockdowns and international border closure since March 2020 have been credited with holding down COVID-19, but a slow vaccination effort has spurred criticism for Ardern. Just 34% of the population of 5.1 million have been fully vaccinated.

To boost the programme, New Zealand has bought doses of Pfizer-BioNTech vaccine from Spain and Denmark.

“There is nothing holding us back in Auckland when it comes to vaccines,” Ardern added. “There’s capacity to administer 220,000 doses of vaccine in the region this week.”

Vaccine buses will begin plying this week to reach more people, she said.

Infections ease in Sydney, curve flattening not seen yet

Sydney’s COVID-19 cases rose at the slowest pace in nearly two weeks on Tuesday, but officials said they needed to see a steady drop in daily cases before deciding whether the infection curve had flattened after 12 weeks in lockdown.

“It’s too early to know if we’re flattening the curve, but we’re seeing, pleasingly so far, that cases haven’t been increasing as fast as they have been,” Jeremy McAnulty, NSW Executive Director of Public Health Response, told reporters in Sydney.

“We’ll look to see what’s happening throughout the rest of this week to know how we’re going.”

Nearly half of Australia‘s 25 million population is in lockdown, including people in Sydney and Melbourne, its largest cities, and the capital Canberra, as the country grapples with a third wave of infections from the fast-moving Delta variant.

Still, its coronavirus numbers are far lower than comparable countries, with around 77,000 cases and 1,102 deaths, and the mortality rate in the latest outbreak is lower than last year.

Victoria state reported two new deaths and detected 445 new local cases, down from the year’s high of 473 hit a day earlier, as it looks to accelerate the vaccination rollout in Melbourne’s hardest-hit suburbs, the state capital.

The federal government plans to move an additional 417,000 vaccine doses over the next three weeks for residents in Melbourne’s north and west, where most new infections are being detected. Pop-up hubs will be set up in schools, community centres and places of worship.

Authorities on Tuesday extended the lockdown in Canberra for four weeks until Oct. 15 as it reported 22 new local cases, up from 13 a day earlier.