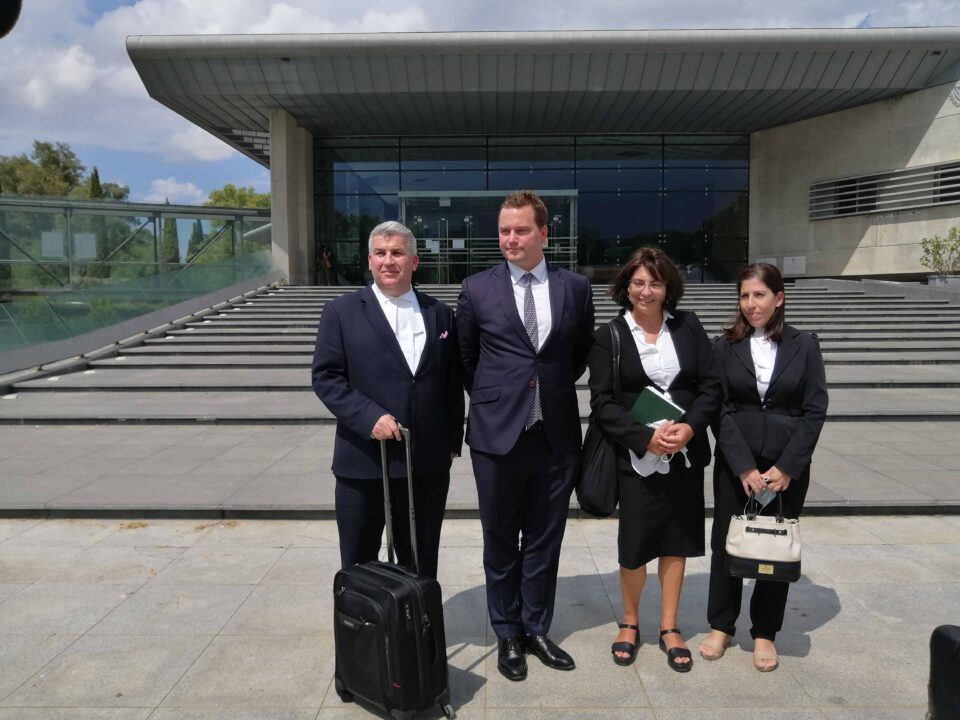 The Supreme Court on Thursday reserved its decision on whether to uphold or remove the conviction of a young British woman who was handed a suspended four-month prison sentence last year after being found guilty of public mischief for reporting she was raped by Israeli tourists in Ayia Napa in 2019.

An appeal hearing was held on Thursday morning at the Supreme Court against the conviction.

The young woman’s team of lawyers, assembled by Justice Abroad that is assisting the appellant and her family in their pursuit of justice, expanded on the around 150-page detailed skeleton argument to explain to the Court why the conviction was unsafe.

The woman, who was 19 when she reported in July 2019 that she had been raped by around 12 Israelis aged 15 to 22, was charged with public mischief after she retracted her initial complaint and was handed down a suspended four-month jail sentence after being found guilty by the Famagusta district court.

Justice Abroad’s Michael Polak who is coordinating the appeal against the teenager’s conviction, said the Court decision is to come within six months, but it might come sooner than that. “We are hoping for a decision as soon as possible, “he said after the hearing. The Supreme Court will either uphold the conviction or remove it.

“Without wanting to prejudge the decision of the Supreme Court, we were pleased with how the proceedings went and how the justices engaged with our arguments,” he added.

The main grounds of appeal include that the retraction statement should not have been admitted in the trial proceedings coming after the teen was held six hours at the police station without a lawyer, suffering from PTSD and without a translator.

Defence also submitted that the judge at the Famagusta district court did not provide the defendant with a fair hearing “and closed his mind to an essential element of the offence by continuously shouting ‘this is not a rape trial, I don’t want to hear evidence about rape’ as well as preventing the defence team from properly examining and putting forward evidence which supported the teenager’s account that a rape had taken place as described.” He therefore failed to properly apply the burden and standard of proof by failing to require the prosecution to prove each element of the offence beyond reasonable doubt and started with a preconceived idea that the accused had committed the offence charged before hearing all the evidence in the trial, defence said.

“We say the trial judge prejudged the issues in the case in that he refused to hear evidence about the rape taking place, a key feature of the offence of public mischief,” Polak said.

Further arguments submitted at appeal included the failure of the trial court to properly consider the evidence before it, including DNA evidence of three of the Israeli youths on a condom which was also found with blood on it, and the evidence from two English youths and the doctor at the hotel about the state of the teenager when they found her on the night of the rape incident, “which supports the teenager’s account of what took place.”

Other key points were the total dismissal by the trial judge of all defence expert evidence “for no good reason”, and the omission of the trial court to consider the prosecuting authority’s failure to conduct a proper investigation into the rape. It also pointed out the court’s failure to take into account the choice of the prosecuting authority not to adduce evidence to prove what happened on the night of the rape in the hotel room in that they failed to call the Israeli youths to give evidence.

“Therefore, the court was left with only the teenager’s testimony about what happened in that room and should not have found to the criminal standard, beyond reasonable doubt, that she lied about being raped as a consequence,” defence said.

Power told PA the young woman, now 21, was “bearing up really well. She is getting on with her life at university. She is very anxious about the result, but she is fairly upbeat and determined that this won’t ruin her life.”

“Today, through the Supreme Court of Cyprus, we hope this girl can free herself from the shackles of an unjust conviction which has tarnished her young life,” Power said after the hearing.

Her lawyers believe this case is a very important one as it might set a precedent.

“This case is a seminal one for the protection of human rights in Cyprus as well as the treatment of those who report sexual offences.  It is of the utmost importance for the woman involved to have her unjust conviction overturned, as a conviction such as this can prevent her from applying for certain jobs and is a constant reminder of what happened to her,” Polak said.

In case the appeal is dismissed, the appellant is determined to appeal to the European Court of Human Rights, Charalambidou said.