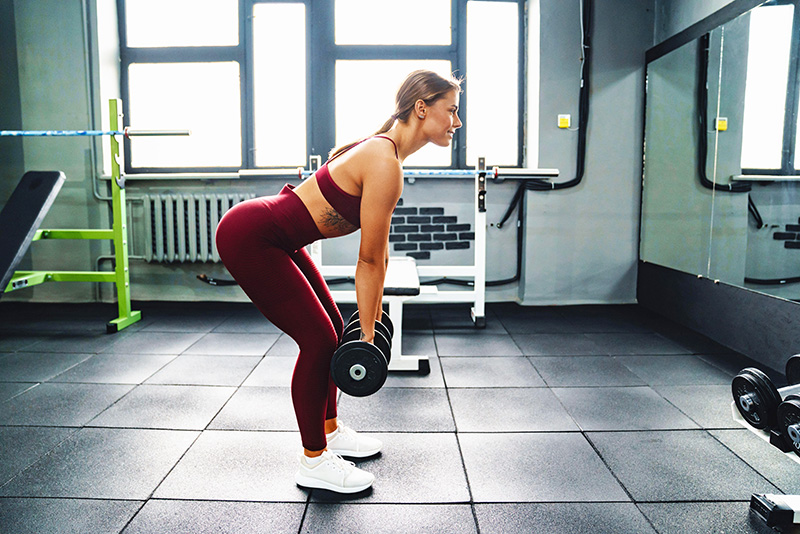 A woman doing a deadlift with dumbbells. Alamy/PA.

If you’re in a rut in the gym or want to set yourself a challenge you might come to a point in your training where you want to start building muscle.

It can be quite a daunting prospect, particularly if you’re looking to make safe and maintainable changes to your body. Getting ripped isn’t just about lifting weights in the gym – you’ll have to consider your diet as well.

While it’s always advisable to consult a personal trainer or doctor if you have any questions, these are some good things to know before embarking on your journey…

The first thing personal trainer Hendrick Famutimi wants to know from clients looking to gain muscle is, “if they’ve done any form of weight training before, just to gather up a basic history of what they’ve done”.

“If you’re a newbie and you haven’t lifted weights at all… If you want to get stronger and build muscle, then go with dumbbell work,” he suggests. Opting for dumbbells over a barbell means you can, “see if one side is stronger than the other”, he says. You can then make sure your dominant side doesn’t automatically take over when lifting weights – this can “lead to injuries”.

If you want to put together a sustainable training plan, he says, be realistic. There’s nothing worse than planning to train three times a week and only managing two – “then you’re going to feel bad about not being able to do it.”

“So I recommend people do two a week – then when they enjoy that and see they’re getting some form of result and they can fit in a third one, they do that off their own back. That’s a big thing because they’ve seen the results, and that result is driving [them] into wanting more,” he says.

For nutritionist Signe Svanfeldt, protein is key to seeing results. “Protein builds muscles and other tissues, as well as aiding recovery,” she explains. “With a good protein balance, we can limit muscle breakdown and stimulate muscle building.”

It’s important to consider what kind of protein you’re having. Svanfeldt says: “Protein consists of small building blocks called amino acids. There are about 20 different amino acids in total, nine of which are essential. This means that we need to get them through the food we eat since we can’t produce them naturally.”

Some animal protein sources contain all nine – including eggs, fish and chicken – but it’s rarer for plant-based sources to contain all of them, so you’ll need to combine food.

To really see changes in your body, Svanfeldt’s top tip is to make sure you’re eating enough. “If you don’t, the body will use the protein as fuel, instead of its other tasks, such as building muscles”, she says.

If you struggle with this, Svanfeldt advises: “It’s a good idea to eat energy-dense foods, including nuts, avocado, seeds and olive oil, to increase the amount of energy without having to eat large amounts of food.”

A lot of this is down to genetics. Famutimi says: “There are eight billion people in the world – everyone’s completely different in how they respond.” What’s important is to not let it get you down and not compare yourself to others, because “everyone’s got their own journey to go by”.

Results might also differ between men and women, because “it’s easier for men to build more muscle than women due to testosterone levels,” Famutimi suggests.

Common mistakes include “not finding the time to learn how to do the technique properly,” Famutimi says with a groan. This is something he particularly saw when gyms were closed during lockdowns, when some people made up their own “creative” training plans at home.

Famutimi also warns against, “going to wrong sources to learn how to do an exercise”. He says squats and deadlifts are two of the most effective and common exercises, but are often executed improperly. With deadlifts he often sees, “people with a rounded back, so they’re deadlifting using all their back and no legs” – potentially leading to injury.

Outside of the gym, building muscle doesn’t mean you have to reach for the protein powder. It “can be helpful for those who have difficulties eating a sufficient amount of energy; it’s easy to drink a protein shake and really convenient, particularly if you’re on the go,” Svanfeldt says. “But whole foods that are rich in protein work just as well, plus they come with many other benefits.”