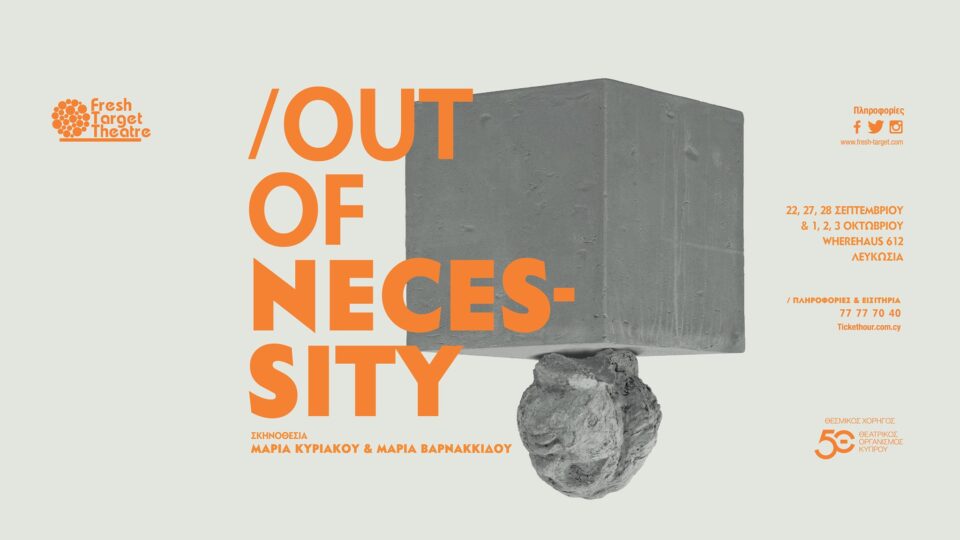 Sociologists, historians, anthropologists and even common people like you and me often talk about local and cultural identity and how it can be crafted from our environment, our history, our country’s constitution or politics. Perhaps the notion of identity contains more layers than that and questioning it can bring up more unanswered queries. Some of them make sense, some of them we have never thought of before.

Last year, Fresh Target Theatre presented the play Out of Necessity which questioned Cypriotness, the island’s history and how we identify with everything we have been told as Cypriots. Its script was like no other, its dialogue casual yet shocking and its sold-out performances received rave reviews from critics and theatre lovers alike. This September, Out of Necessity returns with new material for just six shows in Nicosia and if it is anything like the previous performances, it is not to be missed!

There were just six actors on stage, minimal props and no costume changes yet the script was so captivating it gripped audiences.

Starting from revisiting the Constitution and the Doctrine of Necessity, the play rethinks how these documents have defined the island’s political status, the islanders’ sense of identity and even our daily life. Archival footage, theoretical essays and even personal experiences of the creators inspire the play and it begins with presenting these official documents, after which they are explored through conversation – in the Cypriot dialect – in a fun, sad and angry way.

It is as if watching a conversation between friends, an overview of young Cypriots growing up on the island and finally questioning all that Cyprus means to them. What does it mean to be Cypriot? Who is Aphrodite? Why do boys go to the army and is it even really an army? How well do locals know Cyprus’ history?

This September 22, 27, 28 and October 1, 2 and 3, Out of Necessity continues its search for identity and after a successful first-run, it returns for more evenings of reflection and questioning. A must-see for the Greek speakers of the island!