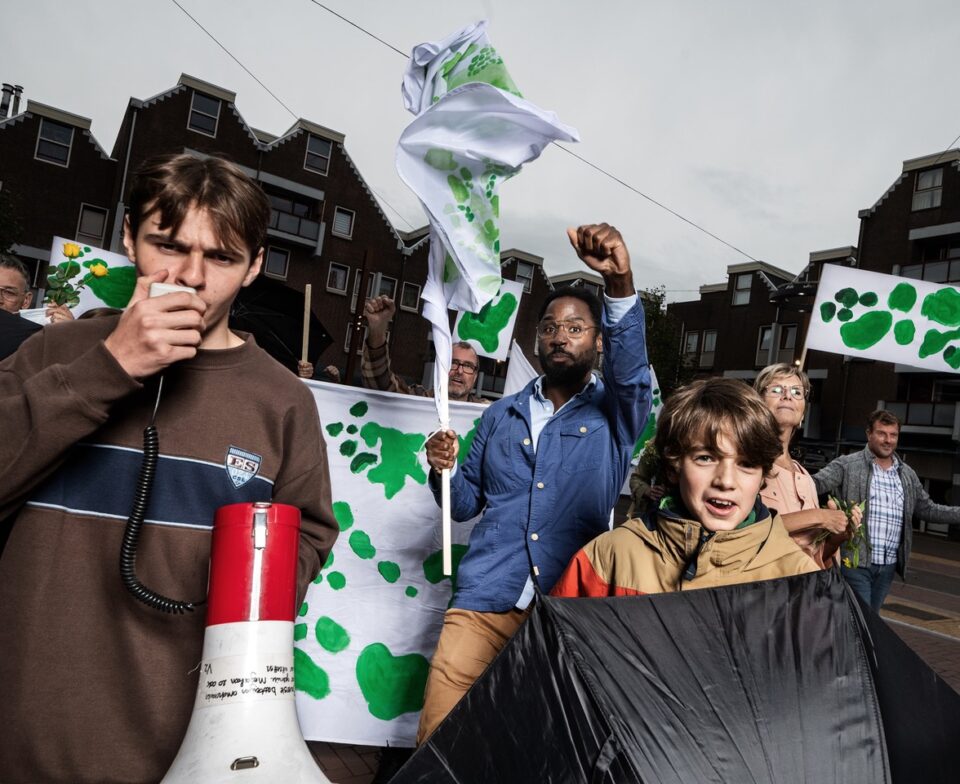 Rehearsing the Revolution (Photo by Space)

In the face of mounting political, environmental and pandemic-related challenges, the Buffer Fringe Performing Arts Festival is encouraging artists to resist through the transformative power of the arts in its upcoming eighth edition, to be held on October 8, 9 and 10.

Since 2014, the Buffer Fringe, organised by the Home for Cooperation, questions sensitive topics, giving space to artists to express new ideas in innovative ways and enabling audiences from diverse communities to engage in dialogue, thus promoting understanding.

The festival this year will take place across the island, internationally and online. It features collaborations and partnerships with an exciting and diverse line-up of artists and organisations from Cyprus and abroad, presenting original work around the theme of Displacement.

“In Cyprus what we mostly crave is stability, but being too ‘stable’ makes you inflexible. And in the arts there is a constant flow, new and old stories are moving and exploring the current condition of being human. As a festival, we aim to consistently support artists in their presentation of this exploration. We are there to help art resist.”

Eleven projects are taking part in this year’s festival. 95 Stops / Mapping the Space Between Us is site-specific to public and private urban spaces in Famagusta and Limassol, interrelating stories and buildings, objects and people, dreams and nightmares. Rehearsing the Revolution – Common Grounds Dialogue includes immersive storytelling and performance based on the ‘politics of the personal’ and ‘starting the revolution in the imagination’, presented by a group of artists. To Your Hands is a multimedia/documentary animation installation exploring the artisanal and culinary traditions in the north and south of Cyprus.

It May All Be Over Soon is a multimedia performance by Androula based on a series of reflections on our relationship with the natural world, informed by a vivid awareness of the unfolding environmental crisis. Visual artist Twenty Three, Andreas Economides and Elena Vasiliou collaborate on The Serpent’s Egg Deconstruction, an audio-visual installation based on interviews with Cypriot refugees and immigrant communities, raising questions about practices of displacement and drawing inspiration from Ingmar Bergman’s movie The Serpent’s Egg. Restless Spirits is a performance film by Yeon Yeji, a process spanning the entire moon cycle seeking to honour the ‘restless spirits’ of the Korean diaspora of Soviet Russia who were victimised through forced migration and displacement to Central Asia in 1937.

8102 is an interdisciplinary radiophonic performance by Switzerland-based artist duo Karla Isidorou and Alexandra Bellon, challenging the audience to displace their imaginations and minds altogether towards an unknown territory, the ultra-future in the year 8102. Wheel of Radical Affection presents a contemporary dance produced by PERA School of Performing Arts, choreographed by Rafaela Sahyoun. A drive-in performance called Dame is also coming up in the festival as visual artist Pashias invites audiences to drive, park and meet in an empty parking lot to experience a landscape environment through their private shelters. Going online, Nomadic On-line Dialogue 2 – New Fluid Territories will explore ideas of place with community, environment, permeability, sustainability and flux as positive attributes with an international interdisciplinary group of artists, designers and architects. Lastly, Yuka Blend will present an upbeat afternoon of movement and hip-hop workshops and performances in the buffer zone. More information on artists can be found on the festival’s website: www.bufferfringe.org/artists

8th edition of festival with performances, discussions and installations. Around Cyprus and online. October 8-10. www.bufferfringe.org