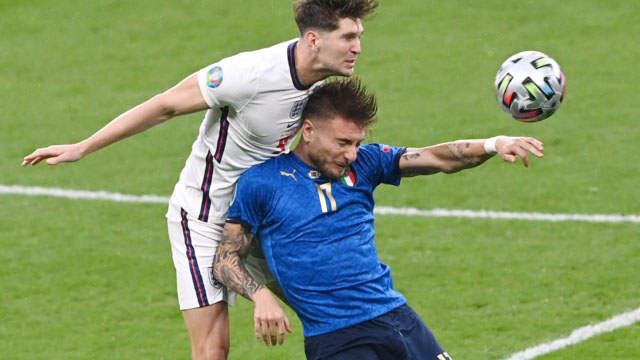 In the first half heading will only allowed if the ball is in the penalty box, while in the second half it will be outlawed outright

The first adult football match which outlaws heading could be more skilful with more passing and dribbling, according to a charity boss whose ex-pro husband has dementia.

A fundraising game in aid of brain charity Head for Change and a cancer foundation is being held at Spennymoor Town FC in County Durham on September 26.

Retired professionals from the North East of England will take part in the game which will be played under special rules on heading.

In the first half heading will only allowed if the ball is in the penalty box, while in the second half it will be outlawed outright.

Dr Judith Gates is chairwoman and co-founder of Head for Change and her 77-year-old husband Bill, a defender for many years with Middlesbrough, has dementia.

She said the charity was not campaigning for football to ban heading, explaining it was for the game’s authorities to decide how to protect players from the risk of brain damage.

But she said there was interest in showing how football would look without heading.

Dr Gates said: “It will be really interesting to see how the game looks.

“We look with interest to see how players adapt and show their skills.

“I am hoping for a fast, skilful game.”

Her husband began his career at Spennymoor Town before joining Middlesbrough and the club has agreed to host the charity match, which also raises funds for the Solan Connor Fawcett Family Cancer Trust.

The match kicks off at 3pm with adult tickets priced at £5 and £1 for children.

The Football Association has already placed limits on the number of “higher force” headers professionals can undertake in training to 10 per week.

Head for Change is a charity which champions change for brain health in sport and supports ex-players affected by neurodegenerative disease as a result of their professional sporting career in football or rugby.

It is not seeking a ban on heading in football, which would be a matter for the game’s governing bodies, but attempting to highlight the dangers.

This month’s trial match follows the publication of research by Dr Willie Stewart and his team at Glasgow University which suggests a link between repetitive heading and neurodegenerative disease.

Dawn Astle, the daughter of former West Brom striker Jeff Astle, whose death in 2002 at the age of 59 was attributed to chronic traumatic encephalopathy, has campaigned tirelessly for greater recognition of the issue.

England World Cup winners Nobby Stiles, Jack Charlton, Ray Wilson and Martin Peters are among those to have died after suffering from dementia, while former Liverpool and Newcastle midfielder Terry McDermott recently revealed he had been diagnosed with Lewy Body dementia.