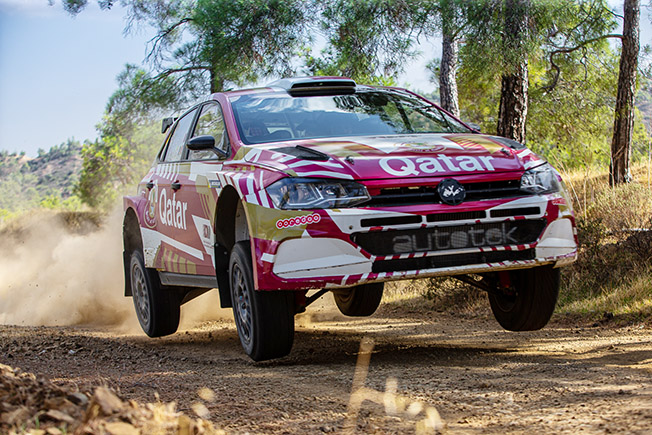 If you’ve heard the throaty roar of racing cars around Nicosia in the last few days, you will know that Cyprus’ premier international sporting event, the Cyprus Rally, gets under way tonight with the ceremonial start taking place at the former town hall in Nicosia’s central Eleftheria Square at 7pm.

Contested over 12 gravel special stages this weekend, the main feature of this year’s rally is the return to a purely gravel surface, following many years as a mixed surface event. The crews will cover some 663 km, including 180 km of competitive stages.

The Service Park, where cars return for service, repairs and the overnight halt is again in Aglantzia, Nicosia but due to the safety measures against Covid-19, spectators will not be allowed to enter the area.

Saturday’s competition gets under way with six special stages run over 94.94 km. Starting at 09.30 in Nikitari, the cars will then tackle stages at Kapouras and Kourdali before returning to the service park at lunchtime. The morning loop of stages is repeated in the afternoon and after spending the night in Nicosia, the crews will head out for the remaining six special stages over 86 km, again with a double loop through Lythrodontas, Ayios Epifanios and Ayia Marina. The finish ceremony will take place at 6pm in Nicosia.

Clerk of the Course Nayia Kontopoulou is enthusiastic about returning to Eleftheria Square for the two ceremonies. “It is a great joy for us that our event will return to the heart of Nicosia, where it was established decades ago,” she said.

Kontopoulou also spoke of the challenges arising due to Covid-19. “This year our rally could not be included in the FIA European Rally Championship (ERC) as the calendar due to the pandemic has been shrunk and will not last more than five months”.

Starting favourite is undoubtedly Qatar’s Nasser Al-Attiyah in car number 1, a Volkswagen Polo GTI: he has won this event a record seven times (not to mention eight other victories on national Cypriot rallies).

The 51-year-old also has 17 Middle East titles to his name and has no plans to retire yet. After winning the season’s first three events he has a 46-point lead over Mshari Al Therifi (whose Mitsubishi Lancer EVO X is seeded number 2) in the MERC standings, and Al-Attiyah’s experience has taught him that, in Cyprus, it’s not always wise to push from the beginning, so he can afford to relax slightly at the start of this weekend’s race to assess the competition.

Full details of the route and timings can be found at www.cyprusrally.com.cy