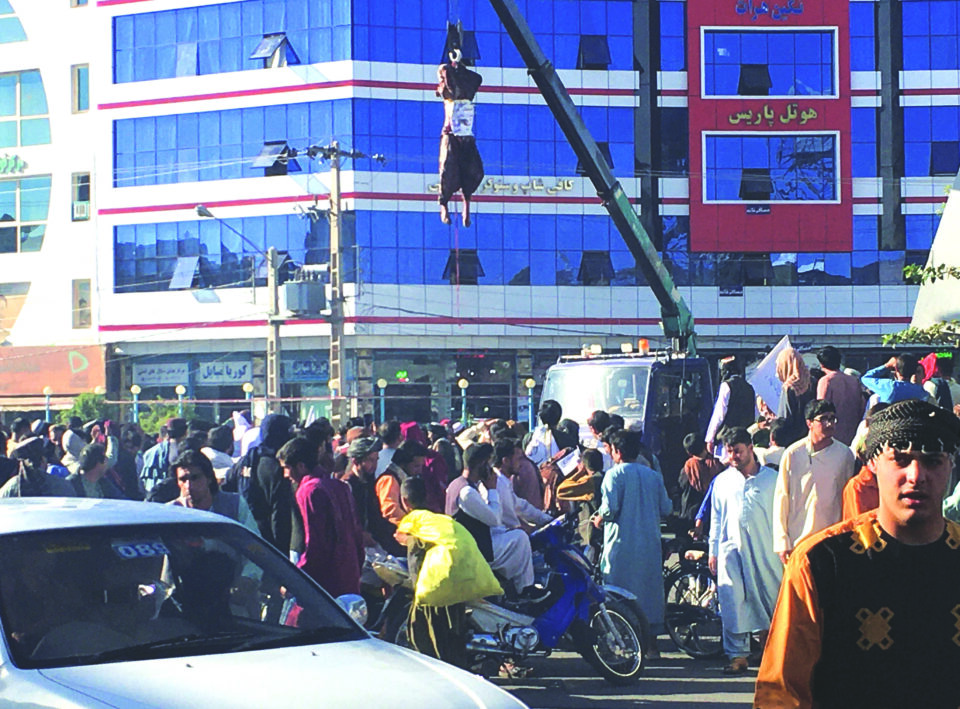 Taliban authorities in the western Afghan city of Herat killed four alleged kidnappers and hung their bodies up in public to deter others, a local government official said on Saturday.

Sher Ahmad Ammar, deputy governor of Herat, said the men had kidnapped a local businessman and his son and intended to take them out of the city, when they were seen by patrols that had set up checkpoints around the city.

An exchange of gunfire ensued in which all four were killed, while one Taliban soldier was wounded.

“Their bodies were brought to the main square and hung up in the city as a lesson for other kidnappers,” he said.

The two kidnapping victims were released unharmed, he said.

Herat resident Mohammad Nazir said he had been shopping for food near the city’s Mostofiat Square when he heard a loudspeaker announcement calling for people’s attention.

“When I stepped forward, I saw they had brought a body in a pickup truck, then they hung it up on a crane,” he said.

Footage of the bloodstained corpse, swinging on the crane was widely shared on social media, showing a note pinned to the man’s chest saying “This is the punishment for kidnapping”.

No other bodies were visible but social media posts said others were hung up in other parts of the city.

In an interview with the Associated Press published this week, senior Taliban figure Mullah Nooruddin Turabi said the group would restore punishments like amputations and executions to deter criminals.

Despite international condemnation, the Taliban have said they will continue to impose swift and severe punishments on lawbreakers to stop crimes like robbery, murder and kidnapping that had become widespread in Afghanistan.

Washington, which condemned https://www.reuters.com/world/asia-pacific/us-condemns-talibans-reported-plan-reinstate-executions-amputations-2021-09-24 Turabi’s reported comments on punishments, has said any potential recognition of the Taliban-led government in Kabul, which replaced the Western-backed government that collapsed last month, would depend on respect for human rights.

According to the official Bakhtar news agency, eight kidnappers were also arrested in a separate incident in the southwestern province of Uruzgan.