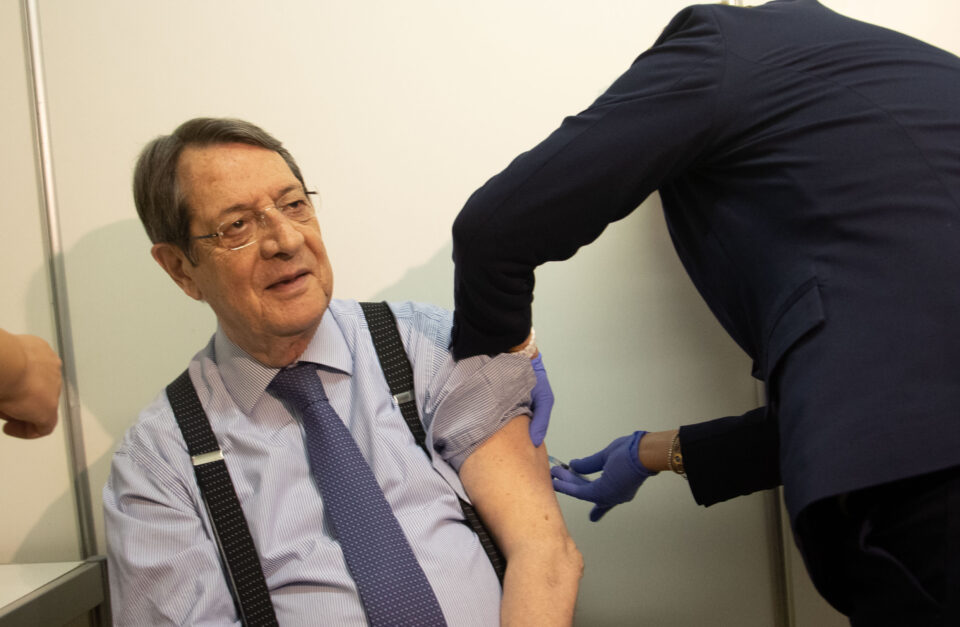 President Nicos Anastasiades appealed to the public to get vaccinated on Friday as he received his third dose at the State Fair site in Nicosia.

He called on the unvaccinated to get the jab, and on those eligible for a third dose to arrange it soon, to make sure they are protected.

“They owe it to their families, to themselves, and to society as a whole, it’s a matter of social responsibility,” he said.

He also said he was pleased that Cyprus had recorded a high number of vaccinations, which translates into an improved epidemiological outlook.

In a tweet later, he said we get vaccinated “to protect ourselves and others”.

Asked whether the government is planning to make booster shots available for the general population, Anastasiades said it was a possibility.

“We will listen to the experts and the health minister will make suggestions to the Council of Ministers. What is important is to have an autumn without problems,” he said.

He also thanked and congratulated the medical staff at the State Fair vaccination centre, where he received his third dose.

“I would like to warmly congratulate you on your impeccable manner,” he said. “Nobody complains, everyone is served… thank you for not wasting your time or efforts”.

Meanwhile the health ministry’s Olga Kalakouta said that 75 per cent of people in care homes had received the third dose in addition to 1,000 medical workers in the private sector and 1,300 in the public health sector.

She also said around 9,000 third doses had been given to members of the public in sensitive groups including transplant patients and those with blood disorders.

Kalakouta added that as of Thursday, some 19,000 people had received a third dose, with the number expected to grow as they become available to more age groups.

People aged 70 and over can book a booster shot as of Friday, provided six months have passed since they received their second vaccine dose.

Vaccination appointments will start from October 11. From then onwards, walk-in centres will also be offering third jabs to over-70s between Monday and Thursday.

She also urged people to get first and second doses, saying it is “encouraging” that daily vaccinations for the first dose are consistently in triple digits.

However, she said that the vaccination rate remains low among under-18s.a