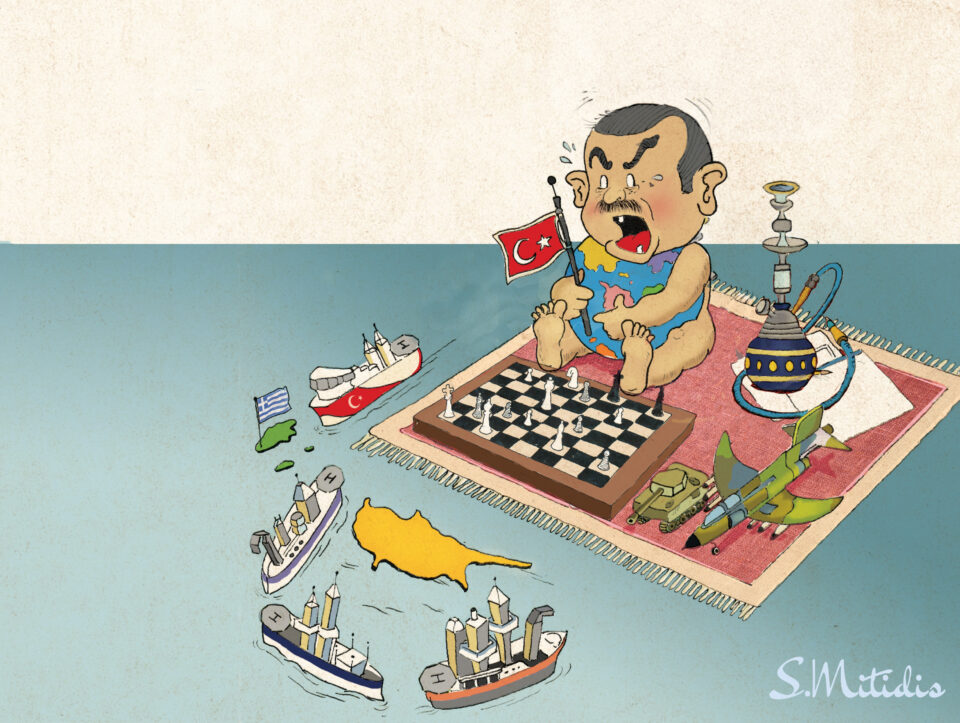 I WONDER whether Prez Nik ever gets tired of issuing denials about his involvement in his law office’s dealings with mega-rich clients that feature in international news stories that are not very flattering. I am definitely tired and bored of hearing his emphatic denials and his fervent attempts to distance himself from the office that is now owned by his two daughters.

One thing is for sure, the recently released Pandora Papers have raised his international profile, foreign hacks, who had no interest in Kyproulla’s prez in the past, now stopping him for comments on the way to EU meetings.  The papers said nothing about him moving money out of Cyprus, but “are talking about the law firm bearing my name and nothing else,” he told foreign hacks.

The law firm bearing his name has been a constant source of bad publicity, at home and abroad, for our prez, even though he has had nothing to do with it for 24 years. He told The Guardian newspaper, which covered the Pandora Papers story, that “while he owned shares in the law firm, until his election in 2013, he had no active role in its affairs after becoming leader of the opposition in 1997.”

In his testimony at the investigative committee for the passports, however, he had said that he ended his ties with the law office bearing his name, when he became president in 2013. He just forgot to mention he had no active role in the preceding 16 years, when he was the owner.

THE SACRIFICES a father makes for his children always pull our heart strings. Nik left his girls to do as they pleased at the law office bearing his name, even if some of their decisions would have a big political cost for him subsequently.

How was he to know what clients his daughters were signing up and whether they were hiding the beneficial owners of companies they registered in the 24 years he had no active role in the affairs of the law office? Like any good father he trusted his daughters not to do anything that would reflect badly on him, but they seem to have let him down.

It is a shame our prez is wrongly getting a bad press internationally, through no fault of his own. His daughters might have been to blame for this, but he would rather take the hits than say this in public.

THE STRESS he was under may have been the reason Prez Nik lashed out against the UNSG Antonio Guterres, whom he accused of being “a deft neutral” in an interview broadcast by the CyBC on Monday night. Guterres did not respect or implement the UN resolutions, said Nik, implying he was hiding behind his cunning neutrality.

An alternative explanation was that he was trying to deflect attention away from the Pandora Papers by offering the public another target. Turning people against UN officials is the oldest trick in the presidential book of public manipulation. There has been no UNSG or special representative or special envoy of the UNSG that has not had the honour of being labelled a Turk-lover, hell-bent on harm the interests of the Greek Cypriots.

Nik had an excuse for offering Guterres to the patriotic lynch mob. He had failed to appoint an envoy to engage in totally meaningless talks with the two sides, like the departed Jane Holl Lute had done so successfully for a couple of years, creating the illusion that something was moving on the Cyprob.

LUTE’S abject ineffectiveness was the reason she was the only UNSG envoy that was not treated with hostility by our government. Previous special envoys such as Alexander Downer and Espen Barth Eide, who actually got the talks process moving, were turned into public hate figures, with Nik demanding their replacement. Eide was publicly declared a liar by our Nik and of acting on Turkey’s behalf.

In other words, we want Guterres to appoint a special envoy, so we can abuse him if he tries to achieve something. Ideally, he would appoint someone like Lute, who would come and go without saying anything, without putting any pressure on us and without pushing for results.

The show must go on as long as it does not have a final act.

IN THE LAST couple of weeks, we were given evidence that the normal country Prez Nik is striving for is not very normal after all. The courts issued injunctions to stop political parties having elections for their leadership.

The first injunction was issued against Edek because three members applied to court on the grounds that there were irregularities with the party register. Dr Sizo ignored the injunction, justifying his decision with some heroic rhetoric and the Nicosia district elections went ahead.

On Friday Nicosia district court issued an interim order preventing the Greens from holding leadership elections today, because some member argued he had been irregularly expelled in July and was thus being unlawfully prevented from standing for election.

The court decided that the applicant, Sotiris Christou, should be reinstated, and suspended the elections for 60 days to give him a chance to conduct his election campaign. Needless to say that in five or eight years, when the court actually tries the case, it might rule that the party had acted entirely lawfully in expelling Christou.

Do the courts not have enough work to do without taking on silly disputes about petty rivalries in political parties? Just asking?

THE INJUNCTION must have been a big disappointment for those Greens that saw the elections as an opportunity to end the movement’s domination by Giorgos Perdikis, who may have stepped down as leader a year ago, but refuses to go away.

The postponed elections would have been a showdown between the Perdikis candidates and the disloyal candidates who wanted to make a clean break from the movement’s Perdikis-dominated past.

The former leader, I hear, is not at all happy in his retirement and continues to meddle in the Greens affairs. He reportedly sits at every meeting of the collective organs, even though he does not have the right to vote, and feels duty-bound to offer his wise advice.

Perdikis is quite clearly unhappy with obscurity he has been consigned to, no longer appearing on TV and radio shows, or being asked by hacks to give his views after meeting. Comrades that felt sorry for him offered to make him the ‘honorary president’ of the Greens, but he has been playing hard to get. He demands to know what powers the ‘honorary president’ would have, because he will not accept the position if he is just a figurehead without any authority.

THE COURTIER in chief of the presidential palace, Petros Demetriou, who is director of the presidential office was not impressed with a scathing article written about him on the 24NEWS website, which claimed he was given so much power by Nik he was performing the role of Vice President.

“He has acquired so much power he issues ORDERS (sic) even to ministers to execute, prepares appointment lists and generally presents himself as controlling the government,” wrote the person with the pen-name Pistolero (gunman).

Pistolero had more to say: “If a minister wants to survive, he must obey Petrakis. Our cool ministers do not DARE (sic) go against him while some of them who know how to move developed a personal relationship with Petran (sic) so they could remain in the government… the scenes of ministers visiting Petrakis in his office to show their loyalty and respect are frequent and spark all types of emotions.”

Demetriou felt obliged to inform ministers about the piece, forwarding it to a cabinet chat room. In his accompanying message he said the writer shamed the prez and ministers, something he had done repeatedly. He also said the writer belonged to the circle of a specific ministry and had tried to embarrass him and ministers on countless occasions.

WHICH ministry was using Pistolero to embarrass the chief courtier and the ministers? According to our establishment’s information, the writer is a blood relative of a woman that works in the office of the foreign minister, who had also served as chief courtier of the palace, when he was government spokesman.

But I am not suggesting for a minute that Nicos Christodoulides had anything to do with Pistolero’s mocking of his ministerial colleagues, as Demetriou had implied.

Ten days ago, in his role as closet presidential candidate, Christodoulides took his election campaign to the annual ppalouzes festival in Pachna, where he shook everyone’s hand and assisted in the ppalouzes-making. He also was photographed joking and laughing with the deputy everyone loves to hate Andreas Themistocleous, who is a Pachniotis and was a few days later expelled by his party Elam for his inappropriate behaviour at the House.

I was stunned that the closet candidate, agreed to be photographed being cordial with Themistocelous, who was still an Elam deputy at the time, as this could only harm his vote gathering in other villages.

WHILE the Turks continued to stop exploratory ships from entering the Cypriot EEZ, with impunity I was reminded of what the closet candidate was saying more than two years ago, when the Turkish violations had begun.

“Soon there will be specific sanctions against Turkey,” he told Vima newspaper in June 2019. “It is significant that we have this significant platform, this very clear (xekathari) political decision for transition from statements of support to specific measures.”

It is also significant that the transition to specific measures never really happened, which raises some questions about the minister’s diplomatic skills and political understanding. In Pachna he may have realised that foreign policy is a tad more difficult than making ppalouze.

A storm in a coffee cup