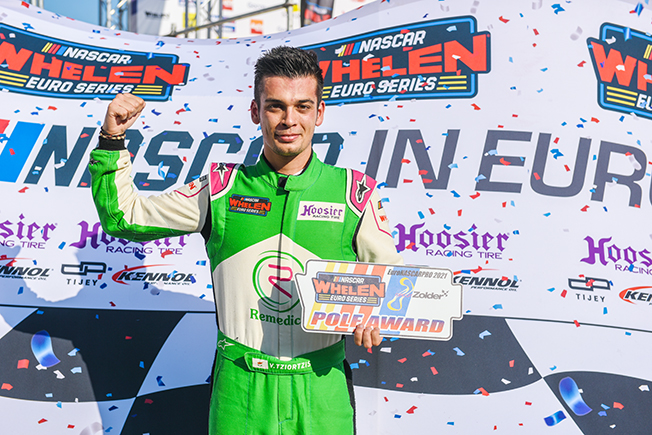 Vladimiros Tziortzis produced a very good performance in Belgium, where he finished second

Cypriot driver Vladimiros Tziortzis finished second at Circuit Zolder in Belgium in the Nascar Whelen Euro Series championship, keeping him in the battle for the title.

With two races remaining, where points count double, Tziortzis is in third place, only 24 points from the leader Tobias Dauenhauer and 21 points from second-placed Martin Doubek.
The next stop is the Autodromo Vallelunga in Italy on October 29-31.

Starting from the fourth position in Belgium, the Cypriot driver managed to climb to second on the podium.
He qualified first for the race on Saturday, however an engine problem didn’t allow him to drive as he wanted, with the engine RPM remaining higher than normal before each corner.

During the first race, regardless of the problems he faced, he managed to finish in fifth place despite two collisions due to the problem.

He still managed to set the fourth fastest lap, meaning that’s where he started from on Sunday.
“At the start I got a hit by the Indian driver, Deodhar. As a result at the next two turns I found myself off the track, but also with a puncture.

“Nevertheless, my team was ready and so the tire change was done quickly before the safety car closed the lap after additional accidents by other drivers,” Tziortzis said.

“I took my place back, climbed up to third, and then due to a 10-second penalty that Tobias had received, we finished second,” he added.

“It was perhaps the most difficult weekend so far. We showed that we could win the race on Saturday, as I had my first pole position in the championship, but we were unlucky.
“This misfortune was not the most positive but things could have been even more difficult, fortunately the car made it to the end.

“The problems continued on Sunday morning before the ten-minute warm-up, but the team completely changed what they needed so that we could be sure for the second race.”

IMF revises upwards its forecasts for growth of the Cypriot economy