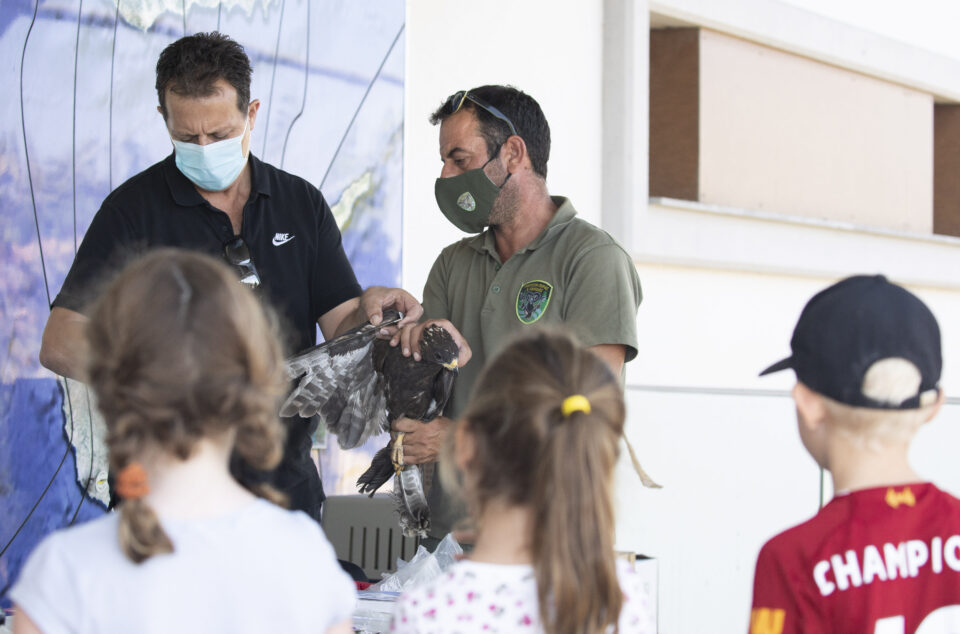 Staff at the Akrotiri Environmental and Education Centre (AEEC), supported by members of the Republic of Cyprus Game Fund, have released two Honey Buzzards back into the wild fitted with GPS/GSM transmitters. The birds, which have been rehabilitated after injury, will now follow their migration route to Africa. The tags will allow AEEC staff to monitor their movements after their release and will provide more valuable data on their migratory patterns

Staff from the Akrotiri Environmental and Education Centre and members of the cyprus Game and Fauna Service, this week released four protected bird species back into the wild after they were successfully rehabilitated.

The birds – a Honey Buzzard, a Black Kite, two Night Herons and a Corncrake – which had been found “injured or exhausted” during their migration efforts, had been undergoing treatment at the Game and Fauna Service facility in Nicosia before being returned to the Akrotiri area to continue their journey, according to a statement from the British bases.

Prior to their release, the birds were ringed to better inform the AEEC and Game Fund expert’s migration and ecology studies and a GPS/GSM transmitter was also fitted to a Honey Buzzard to track its migratory route to Africa.

Thousands of Honey Buzzards are estimated to pass through Akrotiri every autumn as part of their migration route and are said to use the peninsula as a stop-over site to rest – typically for one night – before continuing.

Speaking at the release, Dr Thomas Hadjikyriakou, the AEEC manager, explained why these actions were so significant and why he felt the presence of children from Akrotiri Primary School was so important, he said: “Knowledge on their migratory routes is vital for their protection and conservation in Cyprus and across their migratory routes from Northern Europe to Central Africa.

“The work today has been utilised for educational purposes as part of the educational programs offered at the centre to military and RoC schools.

“Children from Akrotiri Primary School have followed the whole process of taking biometric measurements, attaching rings and using transmitters and the issues of bird migration, poaching and conservation work has been explained to them.”