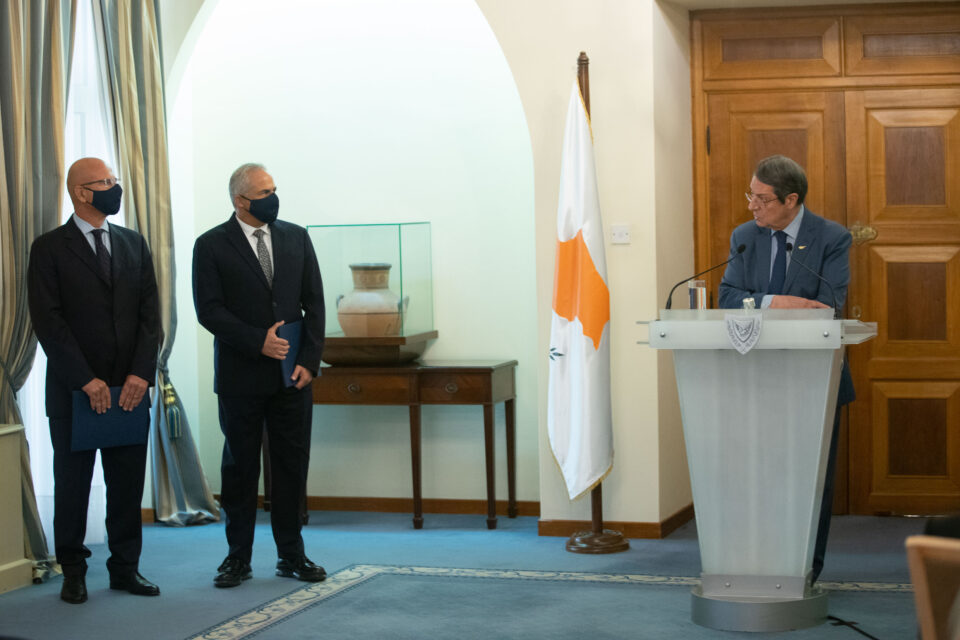 President Nicos Anastasiades on Friday urged vulnerable consumers to make use of existing incentives that offer up to a 20 per cent discount on their electricity bills, as he took stock of progress in the government’s energy strategy aimed at ensuring adequate resources at accessible prices.

This centres on a competitive internal electricity market, greater use of renewable energy and ending the island’s energy isolation.

Speaking at the swearing ceremony of the president and vice president of the Cyprus energy regulatory authority (Cera) Andreas Poullikkas and Alkis Philippou, both of whom were reappointed for a second term, Anastasiades said that the recent spike in energy prices was a worldwide phenomenon he hoped would soon be overcome.

Cyprus has already made progress in key elements, he said noting that recently approved bills for a competitive electricity market also regulate protection of vulnerable consumers.

“May I remind you that there are those who are eligible for discounts who, to the present, appear to have neglected to do so. With higher electricity prices as a result of the world crisis in the energy market, I would like to ask all those who fall into the category of vulnerable groups to seek out the significant discount which can reach up to 20 per cent,” he said.

This issue was particularly pressing given the unprecedented increase in fuel and electricity prices which has led the state to introduce a 10 per cent cut on electricity bills, he added.

Steps taken so far are adoption of the national plan on energy and climate with a timeline to 2030 based on the recommendations of the EU’s Green Deal for climate neutrality by 2050.

By 2025, the installation of 400,000 smart meters will be completed at a cost of €35m, while an online One-Stop-Shop has been set up to facilitate information and licensing of renewable energy projects and energy upgrades of buildings.

And he said 223 renewable energy projects are progressing, which on completion and in combination with systems installed at homes and businesses will increase total production from renewables to more than 700 megawatts.

“At this point, I welcome the fact that we have already covered since 2018 the compulsory targets for 2020 as regards the gross final consumption of energy from renewable sources of energy,” he said, adding that €269m will be made available for reforms, investments and subsidies to further promote renewables.

The president said there had been progress also in pillar two of the strategy to end the country’s energy isolation and introduce natural gas.

Three key common interest projects with the EU would facilitate independent electricity production, thereby lowering prices and emissions, he said. These are the proposed electricity link between Cyprus, Israel, and Greece – known as EuroAsia Interconnector which Cyprus is financing with €100m, the EastMed natural gas link to transport gas from the Eastern Mediterranean to continental Europe and the Cyprus, Egypt, Greece electricity link – the EuroAfrica Interconnector – the agreement for which will be signed in Nicosia tomorrow.

Cyprus is also pressing ahead with building infrastructure for liquid natural gas at Vasiliko at a cost of €289m of which €101m is being financed by the Connecting Europe Facility.

Anastasiades said the government was determined to proceed with energy plans as regards its EEZ irrespective of Turkish provocations and would continue initiatives to upgrade ventures with countries of the Eastern Mediterranean and Europe.

“Energy can become a catalyst for regional cooperation, always on the basis of international law, the law of the sea and good neighbourhood, contributing in this way to efforts to achieve stability and security,” he said.

The establishment of the regional inter-governmental organization East Mediterranean Gas Forum with the participation of Cyprus, Egypt, Greece, Israel, Italy, Jordan, Palestine France was a landmark in this effort, he added.