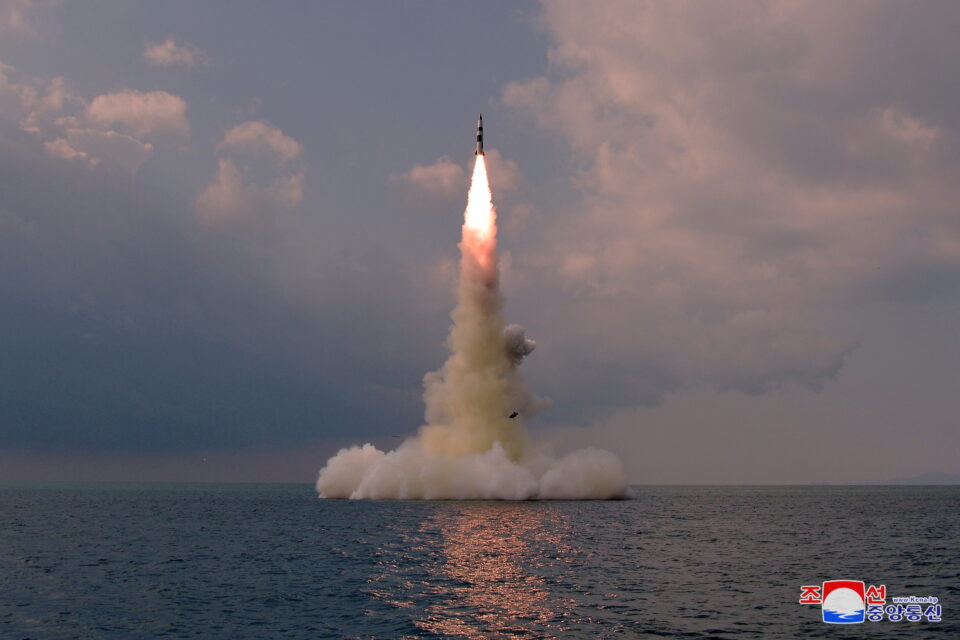 A new submarine-launched ballistic missile is seen during a test in this undated photo released on October 19, 2021 by North Korea's Korean Central News Agency (KCNA). KCNA via REUTERS ATTENTION EDITORS - THIS IMAGE WAS PROVIDED BY A THIRD PARTY. REUTERS IS UNABLE TO INDEPENDENTLY VERIFY THIS IMAGE. NO THIRD PARTY SALES. SOUTH KOREA OUT. NO COMMERCIAL OR EDITORIAL SALES IN SOUTH KOREA. TPX IMAGES OF THE DAY

North Korea test-fired a new, smaller ballistic missile from a submarine, state media confirmed on Wednesday, a move that analysts said could be aimed at more quickly fielding an operational missile submarine.

The statement from state media came a day after South Korea’s military reported that it believed North Korea had fired a submarine-launched ballistic missile (SLBM) off its east coast, the latest in a string of North Korean missile tests.

The White House urged North Korea to refrain from further “provocations”, with spokeswoman Jen Psaki saying on Tuesday the United States remained open to engaging diplomatically with North Korea over its weapons programmes.

Pyongyang so far has rejected those overtures, accusing the United States and South Korea of talking diplomacy while ratcheting up tensions with their own military activities.

South Korean Foreign Minister Chung Eui-yong on Wednesday called for Washington to ease sanctions if the North returns to talks.

“Action must be taken as soon as possible to stop North Korea from further developing nuclear and missile capability,” he told parliament. “I think considering relaxing sanctions can surely be an option.”

The United States and Britain plan to raise the North’s latest test during a U.N. Security Council meeting on Wednesday, diplomats said.

The “new-type” SLBM was launched from the same submarine involved in a 2016 test of an older SLBM, North Korea’s state news agency KCNA said.

North Korea has a large fleet of ageing submarines, but has yet to deploy operational ballistic missile submarines beyond the experimental Gorae-class boat used in the tests.

Photos released by KCNA appeared to show a thinner, smaller missile than North Korea’s earlier SLBM designs, and may be a previously unseen model first showcased at a defence exhibition in Pyongyang last week.

“Though a smaller North Korea SLBM design could enable more missiles per boat, it could also enable smaller less challenging SSB designs, including easier integration/conversion on pre-existing submarines,” Joseph Dempsey, a defence researcher at the International Institute for Strategic Studies, said on Twitter.

Still, the development was expected to have only a limited impact on Pyongyang’s arsenal until it made more progress on a larger submarine that has been seen under construction.

“It just means they’re trying to diversify their submarine launch options,” said Dave Schmerler, a senior research associate at the James Martin Center for Nonproliferation Studies in California. “It’s an interesting development but with only one submarine in the water that can launch notionally one or two of these it doesn’t change much.”

Kim Dong-yup, a former South Korea Navy officer who teaches at Seoul’s Kyungnam University, said the missile could be an advanced version of the KN-23, a short-range ballistic missile first tested in 2019, citing its range, visual resemblance and stated guidance technologies.

“(The SLBM) will greatly contribute to putting the defence technology of the country on a high level and to enhancing the underwater operational capability of our navy,” KCNA added.

Schmerler said “glide skip” was a way to change a missile’s trajectory to make it harder to track and intercept.

The missile was launched from the sea near Sinpo, where North Korea keeps submarines as well as equipment for test firing SLBMs, South Korea’s Joint Chiefs of Staff said on Tuesday.

The test came as both Koreas have been developing increasingly sophisticated weapons while efforts prove fruitless to bring a negotiated end to the North’s nuclear and missile programmes in return for U.S. sanctions relief.

South Korea’s President Moon Jae-in said in a speech at an annual defence expo on Wednesday that his drive to boost defence is aimed at achieving peace on the Korean peninsula.