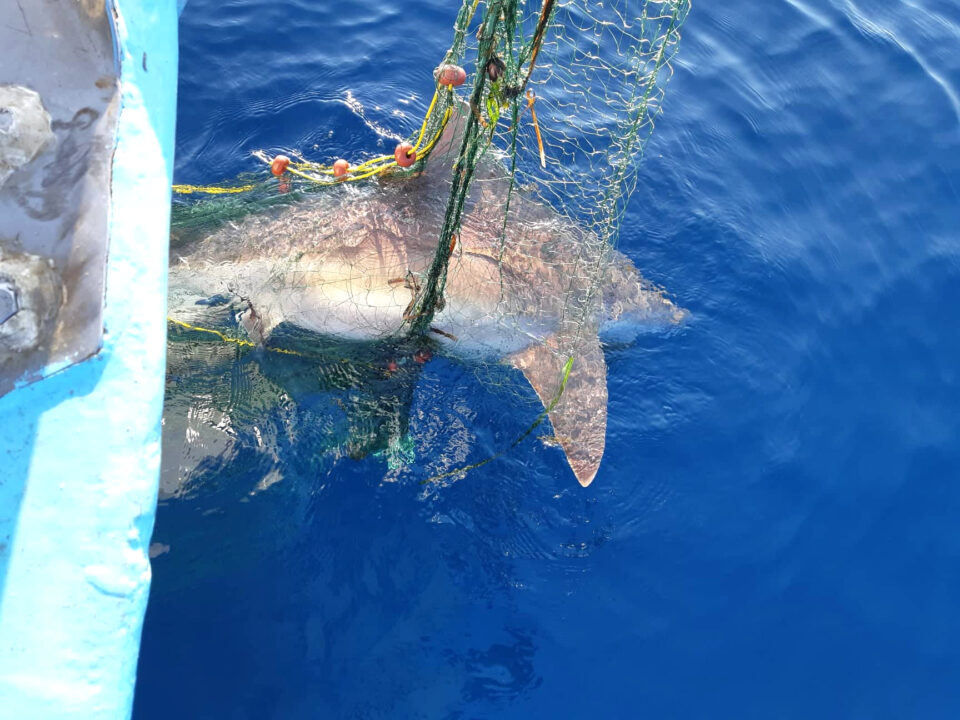 A recent incident with a Bluntnose sixgill shark (Hexanchus griseus), that was incidentally caught on a tourist fishing vessel in Larnaca, received lots of attention from the media and press in Cyprus. Considering the fuss that followed, we think that it is important to provide information regarding the issue of bycatch of vulnerable species and why it is important to protect those species, in an attempt to raise awareness among the public. The incident was first recorded and published by Enalia Physis Environmental Research Centre and details are available here.

Bycatch is a term widely used to describe the incidental and unintentional capture of vulnerable species in fishing operations. With the term vulnerable species we refer to the species that lie within several taxonomic groups, including sea turtles, dolphins, whales, seals, seabirds, sharks and rays. The bycatch of vulnerable species is a key conservation issue in the Mediterranean Sea, but is also considered a significant threat to the profitability and sustainability of fisheries. Despite the fact that bycatch threatens the population of several species including the green turtle and the Mediterranean monk seal, little has been done to date to eliminate this problem. Understanding and quantifying the bycatch of vulnerable species and adopting effective mitigation measures are essential steps towards the reduction of incidental captures of such species and the conservation of marine ecosystems at large, thus ensuring the sustainability of the fisheries sector.

It is still difficult and extremely challenging today, to develop and implement solutions for the prevention of bycatch as detailed information on the issue is lacking. In some parts of the world, solutions to reduce the bycatch of certain species have been successfully implemented, however, very little research has been conducted to determine if those species-targeted solutions, can be beneficial across different taxonomic groups. Moreover, in the Mediterranean Sea only limited work has been done on bycatch reduction solutions and only for specific groups (ie turtles and seals). In order to change the management of fisheries regarding the reduction of bycatch of vulnerable species, it is necessary to understand the fishing operations and fishing gear in detail and test mitigation measures in collaboration with the fishing industry. Whilst for Cyprus knowledge on fishing operations is relatively high and bycatch solutions are implemented for some groups, for other groups very little is known.

So why are these specific species and taxonomic groups considered vulnerable and why is it more important to protect them over others, like fish, molluscs (for example squids) and crustaceans (like crabs)? First, we should explain what it is considered a vulnerable species. A species is considered vulnerable when it is sensitive to stressors like climate change (which results in increased seawater temperature), degradation of and/or loss of their habitats, invasive species antagonists (such as lionfish), pollution, and anthropogenic pressures like increased coastal urbanisation, tourism, shipping and fishing.

The classification of species is also assessed based on its population status. The groups mentioned above are considered highly vulnerable to these stressors, especially to fishing and climate change. To answer why they are vulnerable, we have to understand very basic elements of their biology. These species are usually characterised by very slow rates of reproduction, due to their late maturity age and low offspring levels, while fitness of their offspring is also limited. The different stressors mentioned above, in combination with their biological traits, make them very vulnerable. It is very difficult for them to recover from a depletion in their population without any bycatch mitigation measures.

What’s so important about these species?

And why is it so important to conserve and protect these species? What will change in our lives if one or more species are critically endangered or go extinct? Let’s take as an example elasmobranchs, the funny scientific name for sharks and rays, the most susceptible to fishing and bycatch all over the world.

Elasmobranchs play an important role in an ecosystem by contributing to the naturally balanced food chain. They also contribute to the elimination of weak and sick animals, which in turn supports conservation of biodiversity through an ecosystem. The decline of shark and ray populations contribute to the destruction of reefs, the shrinkage of seagrass meadows as well as the decline of commercial fishing. In addition, their removal from an ecosystem, favours the increase in population of predators (otherwise sharks’ prey) which in turn feed on herbivores at non-sustainable levels. With fewer herbivores, algae multiplies, resulting in an algae-dominant ecosystem, thus affecting the survival of reefs and other important habitats. All of the above, have a significant impact on the economy and livelihood of a country or an island, especially on communities where fishing and fish is a vital part of people’s lives.

Local efforts towards the conservation of vulnerable species

The Cyprus Bycatch Project is a bi-communal project, funded by MAVA Foundation, coordinated by BirdLife International and partners in Cyprus, including BirdLife Cyprus, Enalia Physis Environmental Research Centre and Society for the Protection of Turtles (SPOT). The main aim of this project is to understand the bycatch of vulnerable species in relation to fishing equipment and fishing methods and at fine spatial scales and to test measures and equipment that could potentially mitigate bycatch. This is the first project of its kind in Cyprus. The project also aims to train professional fishers to safely handle and release vulnerable species, address the issue of bycatch of vulnerable species through policy, advocacy (including roundtables with stakeholders and decision-makers), promotional outreach events and communication and awareness campaigns among fishers and the general public.

The results of Phase One of the project, have shown that the taxonomic group most impacted by bycatch is the Elasmobranchii (90 per cent of all bycatch taxa recorded throughout the project). It is estimated that hundreds of sharks and rays are bycaught by Cypriot fisheries every year. The full technical report of the results of Phase One is available here. During the second phase of the project, different measures to reduce bycatch are being tested with the kind support of Cypriot fishers that are participating in the project.

Bycatch of vulnerable species is a global issue, in terms of species conservation, fisheries sustainability and financial loss. Many actions, projects and initiatives are carried out around the world to tackle this problem, and in recent years, the efforts have been more intense than ever before.

Today, many of these species, especially sharks and rays reach the market and are legally sold and consumed. In other cases these species, many of which are endangered or critically endangered, are chopped up before they reach the market and mislabelled as other species that are legally sold. Without demand there is no supply. As a consumer you can help reduce bycatch by switching your seafood preferences to more sustainable ones: avoid shark and ray meat and choose locally and seasonally caught fish from small-scale fisheries, as well as non-native invasive species, like the well-known Lessepsian lionfish. You can always ask your local fishmonger for these options.