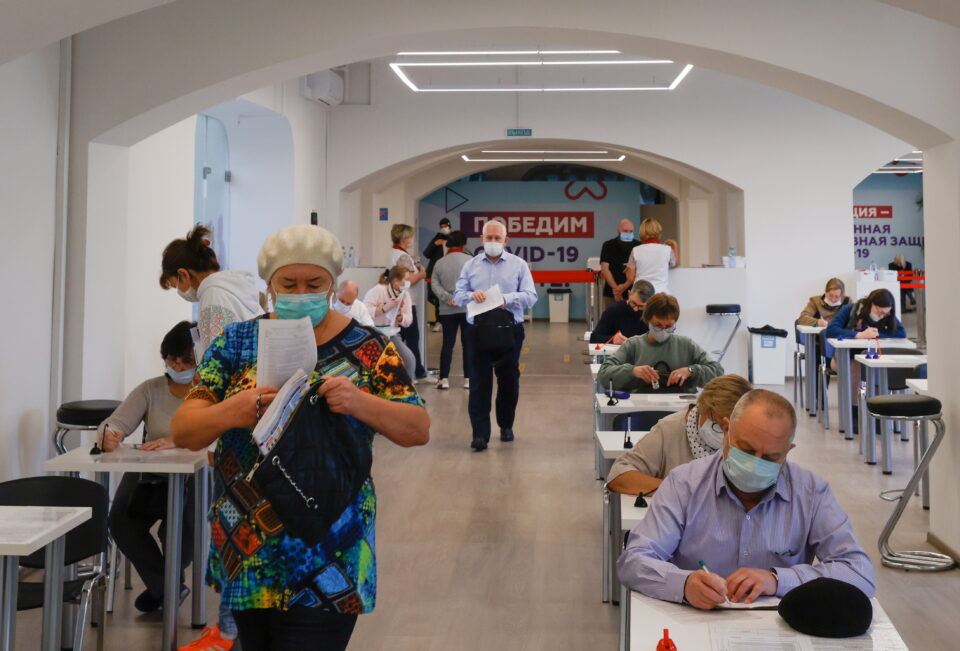 People fill in documents before receiving a vaccine against the coronavirus disease (COVID-19) at a vaccination centre in the State Department Store, GUM, in Moscow, Russia October 26, 2021. REUTERS/Evgenia Novozhenina

The Russian capital brought in its strictest lockdown measures since June 2020 on Thursday as hospitals confront a rising wave of coronavirus cases that has sent one-day pandemic deaths to record highs.

The partial lockdown, in which only essential shops like pharmacies and supermarkets are allowed to remain open, while schools and state kindergartens are shut, comes ahead of a nationwide week-long workplace shutdown from Oct. 30.

Like Moscow, some regions decided to kick off their partial lockdowns on Thursday or earlier, ahead of the nationwide initiative.

Moscow’s residents are allowed to leave their homes freely unlike the lockdown of summer 2020, but the new measures point to rising concern among officials over record numbers of deaths that the Kremlin has blamed on the slow vaccination rate.

Many Russians have decided that now is an ideal time to fly off for a foreign beach holiday instead of hunkering down at home.

There were mixed feelings about the lockdown on the streets of Moscow on Thursday. Some residents like Lyubov Machekhina said they thought it would obviously help slow infections.

Others like Mikhail, a Muscovite who did not give his surname, voiced doubts that there would be any real impact without a larger chunk of the population being vaccinated or having other immunity.

“In my opinion, it will change nothing. Perhaps, it will slow down (the spread of cases) a bit, but in fact, without herd immunity – it’s nonsense. I don’t believe it’ll work.”

The Kremlin has lamented the slow pace of vaccinations across the world’s largest country and said that the campaign to persuade people to protect themselves with Russia’s flagship Sputnik V vaccine or an alternative vaccine has not been effective enough.

As of Oct. 22, official data showed that 49.1 million Russians were fully vaccinated. The total population, excluding annexed Crimea, is officially estimated at around 144 million.

Russia on Thursday reported 1,159 COVID-19 deaths in the past 24 hours, an all-time high, and for the first time the number of daily infections broke through the 40,000 barrier.

Kommersant, citing two unnamed sources close to the presidential administration, said the Kremlin was working on organising a new campaign that would pay closer attention to Russia’s more than 80 regions and strike a less aggressive and negative tone than previously.

The existing campaign has often highlighted the risk of death for Russians who decline to get vaccinated rather than linking vaccination to the freedom to be exempt from lockdown-style restrictions, the sources were cited as saying.

The Russian capital brought in its strictest lockdown measures since June 2020 on Thursday as hospitals confront a rising wave of coronavirus cases.

Kommersant said volunteers and experts would take part in the new initiative and that experts had urged the authorities to set up a special body to conduct the campaign.