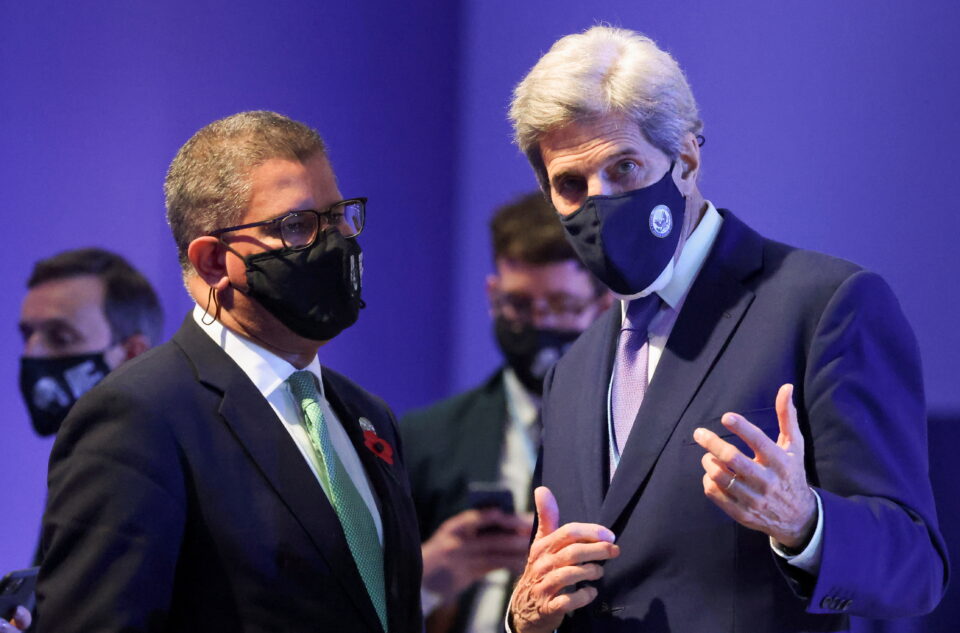 UN climate talks in Scotland ended with a revised global agreement that aimed at least to keep alive hopes of capping global warming at 1.5 degrees Celsius, and so maintain a realistic chance of saving the world from catastrophic climate change.

Britain’s president of the COP26 climate conference, Alok Sharma, said on Saturday he was “deeply sorry” for how the gathering concluded with last minute changes on the wording about coal which drew complaints from vulnerable nations wanting a more definitive statement on ending fossil fuel subsidies.

The last-minute change came with India proposing replacing the phrase “phase out” coal with “phase down”.

His voice breaking with emotion after hearing from vulnerable nations which expressed their anger over the changes to the text, he said: “May I just say to all delegates I apologise for the way this process has unfolded and I am deeply sorry.”

“I also understand the deep disappointment but I think as you have noted, it’s also vital that we protect this package.”

The deal is the result of two weeks of tortuous negotiations in Glasgow that had to be extended for an extra day to balance the demands of climate-vulnerable nations, big industrial powers, and those whose consumption or exports of fossil fuels are vital to their economic development.

“Please don’t ask yourself what more you can seek but ask instead what is enough,” Sharma told delegates in the closing hours.

“Most importantly – please ask yourselves whether ultimately these texts deliver for all our people and our planet.”

The overarching aim set by conference host Britain was one that climate campaigners and vulnerable countries had found far too modest – namely, to keep within reach the 2015 Paris Agreement’s target to cap global warming at 1.5 degrees Celsius (2.7 Fahrenheit) above pre-industrial levels.

A draft deal circulated early on Saturday in effect acknowledged that commitments made so far to cut emissions of planet-heating greenhouse gases are nowhere near enough, and asked nations to set tougher climate pledges next year, rather than every five years, as they are currently required to do.

Scientists say that to go beyond a rise of 1.5C would unleash extreme sea level rise and catastrophes including crippling droughts, monstrous storms and wildfires far worse than those the world is already suffering.

But national pledges made so far to cut greenhouse emissions – mostly carbon dioxide from burning coal, oil and gas – would only cap the average global temperature rise at 2.4 Celsius.

However, Saturday’s draft, published by the United Nations, did call for efforts to reduce coal use and also the huge subsidies that governments around the world give to the oil, coal and gas that power factories and heat homes – something that no previous climate conference had managed to agree on.

India – whose energy needs are hugely dependent on coal – made last-minute objections to this part of the agreement.

Developing countries argue that rich nations, whose historical emissions are largely responsible for heating up the planet, must pay more to help them adapt to its consequences as well as reducing their carbon footprints.

Britain tried to unblock the issue of climate finance, one of the thorniest, by proposing mechanisms to make sure the poorest nations finally get more of the financial help they have been promised.

The draft urged rich countries to double finance for climate adaptation by 2025 from 2019 levels, offering funding that has been a key demand of small island nations at the conference.

Adaptation funds primarily go to the very poorest countries and currently take up only a small fraction of climate funding.

Britain also said a UN committee should report next year on progress towards delivering the $100 billion per year in overall annual climate funding that rich nations had promised by 2020 but failed to deliver. And it said governments should meet in 2022, 2024 and 2026 to discuss climate finance.

Even $100 billion a year is far short of poorer countries’ actual needs, which could hit $300 billion by 2030 in adaptation costs alone, according to the United Nations, in addition to economic losses from crop failure or climate-related disasters.

Tales from the Coffeeshop: Our amazing transformation into a nation of tree-huggers