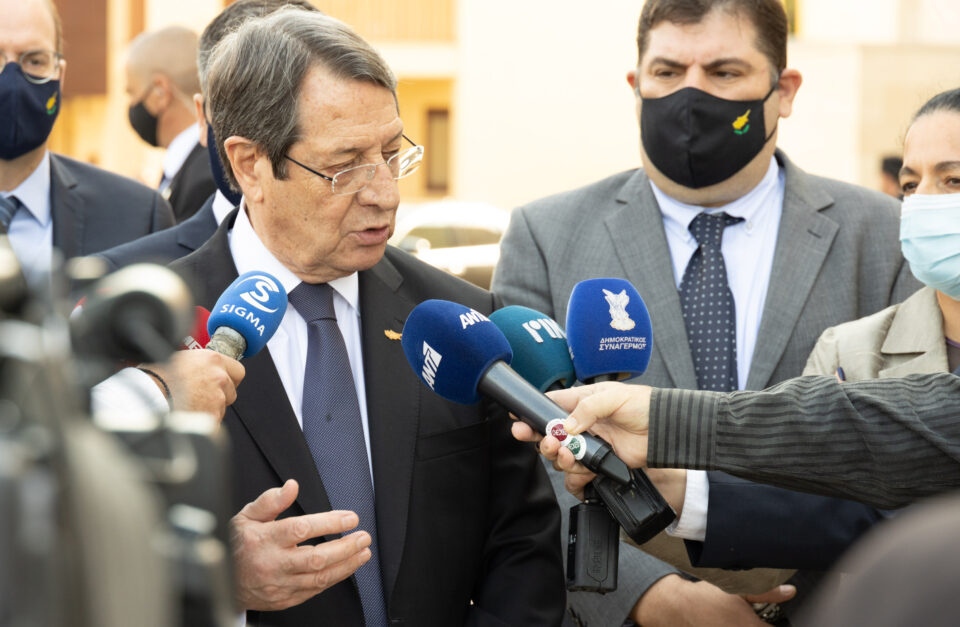 The reality of the Cyprus problem has been repeatedly said, but in an organised way some people have taken care to place the blame on the Greek Cypriot side and not on Turkey and its intransigent positions, President Nicos Anastasiades said on Sunday.

He was commenting on minutes published from a meeting between UN secretary general Antonio Guterres and Turkish Foreign Minister Mevlut Cavusoglu in Crans Montana in July 2017.

Asked to comment, Anastasiades said he would speak later as he understood other minutes would be released, which would show “the real events and not the myths and narratives that a certain UN official was spreading to those well-wishers who wanted to watch and listen to him.

“The reality was repeatedly said by me, but, unfortunately, in an organised way, some people took care to blame or suggest that the responsibility lies with the Greek Cypriot side and not with the real ones who were responsible, who were none other than Turkey and the intransigent positions it expressed”.

In the notes, Cavusoglou said external threats such as terrorism, the situation in Syria and energy concerns would stop Turkey reducing troop numbers in Cyprus. He said it might even be necessary to increase numbers as times had changed.

According to Phileleftheros, which published a copy of the minutes of the meeting, Cavusoglu was responding to a question by Guterres during a meeting between the two shortly before the dinner on July 6 that resulted in the collapse of the talks.

In the notes, it shows that Guterres thought it was necessary to have a positive development on troop numbers to persuade the Greek Cypriot side to give ground on some of the other four chapters.

Anastasiades said Guterres’ position on troops and guarantees was clear: “Abolishing the anachronistic system and replacing it with something that would be acceptable to both sides.

“There is no clearer reference than that of June 4, but also of what is stated in the informal document; those who insisted on guarantees, those who insisted on the presence of troops and even the creation of a military base in Cyprus, are exempt because the SG out of courtesy or to keep the door of dialogue open diplomatically. Did he consider that the attitude of the guarantor powers was constructive? And a simple reading of the positions of the two powers, two of the three shows Turkey insisted on the continuation of the guarantees, Greece wanted the guarantees abolished; we wanted the withdrawal of the occupying troops, they insisted on a permanent presence – that was the constructive attitude of the guarantor powers!”

The notes show that Guterres continually asked Cavusoglou about Turkish troops on the island and whether or not they would stay after a solution of the Cyprus problem.

Anastasiades said in another paragraph of the notes the UNSG said that almost all the internal aspects, table 2 as it was called, were almost agreed.

“I do not want to comment on any more than that,” Anastasiades said “nor do I want to comment on a group of journalists, unfortunately, who for the last four years have been trying in every way, not only to distort the truth and the historical facts, but also to undermine even the prestige of the President of the Republic of Cyprus. History will judge them and judge me.”

“I will repeat that for the first time in the history of the Cyprus issue, the issue of security came into its proper dimension… during the days we were in Crans Montana,” he said on Sunday. “The Secretary-General’s position was so clear that it does not mean a normal state with foreign guarantors and foreign troops,” he said.