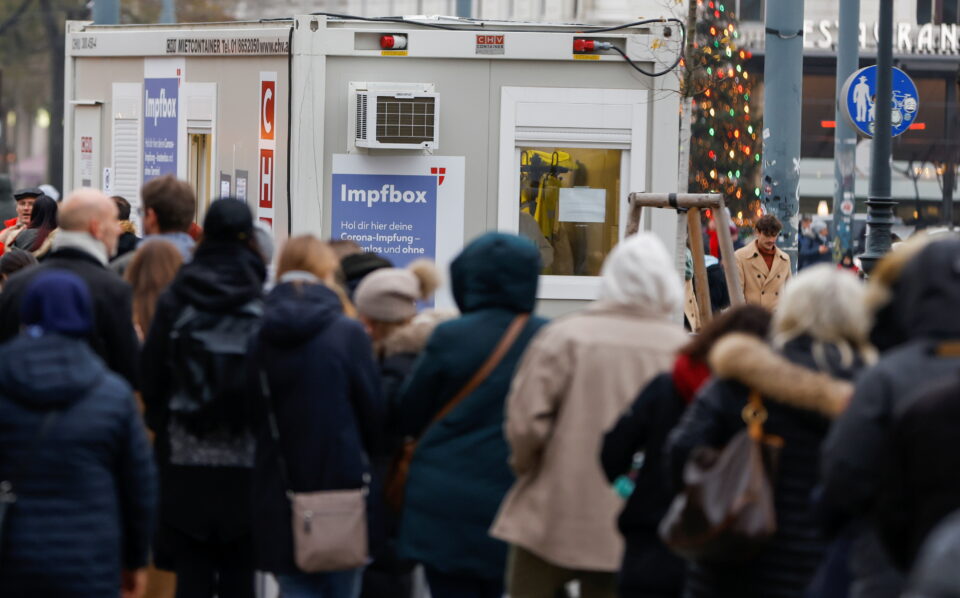 Austria is placing millions of people not fully vaccinated against the coronavirus in lockdown as of Monday to deal with a surge in infections to record levels and the growing strain on intensive-care units, the government said on Sunday.

Europe is the epicentre of the COVID-19 pandemic again, prompting some governments to consider re-imposing unpopular lockdowns. Austria has one of the continent’s highest infection rates, with a seven-day incidence of 815 per 100,000 people.

Austria is the first European country to reinstate the same restrictions on daily movements that applied during national lockdowns before vaccines were rolled out, though this time they only affect a minority of the population.

“We are not taking this step lightly but it is necessary,” Chancellor Alexander Schallenberg told a news conference announcing the new measure, under which the unvaccinated can only leave their homes for a limited number of reasons like going to work or shopping for essentials.

Roughly 65% of Austria‘s population is fully vaccinated against COVID-19, one of the lowest rates in western Europe. Many Austrians are sceptical about vaccines, a view encouraged by the far-right Freedom Party, the third biggest in parliament.

The measures on Monday will extend those brought in a week ago which banned the unvaccinated from places including restaurants, hotels, theatres and ski lifts.

While the Netherlands is dealing with its surge in cases by imposing a partial lockdown that applies to all, Austria‘s conservative-led government wants to avoid imposing further restrictions on those who are fully vaccinated.

“In reality we have told one third of the population: you will not leave your apartment anymore apart from for certain reasons. That is a massive reduction in contacts between the vaccinated and the unvaccinated,” Schallenberg said.

In Germany, the federal government and leaders of Germany’s 16 states are due to meet next week to discuss tightening measures. Germany has already classified Austria as a high-risk area, meaning people arriving from there have to go into quarantine, a blow to Austria‘s winter tourism industry.

Targeted measures have recently been introduced in Australia, where 83% of people aged 16 and above have been fully inoculated. Some states have mandated vaccinations for some occupations and barred the unvaccinated from activities such as dining out, leading to demonstrations.

Singapore, where 85% of the population has been fully vaccinated, has said those who remained unvaccinated by choice would have to foot their medical bills from next month.

Austria‘s lockdown, which does not apply to the under-12s or people who have recently recovered from COVID-19, will initially last 10 days, Health Minister Wolfgang Mueckstein said.

Many officials, including within Schallenberg’s conservative party and the police, have expressed doubts this lockdown can be properly enforced as it applies to only part of the population.

Interior Minister Karl Nehammer said there will be thorough police checks and fines of up to 1,450 euros ($1,660) for breaches, and all interactions with the police will include checking people’s vaccination status.

“As of tomorrow, every citizen, every person who lives in Austria must be aware that they can be checked by the police,” Nehammer told the news conference.

Showing an official COVID pass proving that you have been vaccinated, recovered from COVID-19 or recently tested has been required for months in various places including restaurants, theatres, cafes and hairdressers.

Such passes continue to be required in those places; as of last week the unvaccinated are longer allowed in. As of Monday non-essential shops, where no such passes are required, will be off-limits to the unvaccinated, but the only checks will be spot checks by the police,

One person dead and one injured after car explosion in Liverpool