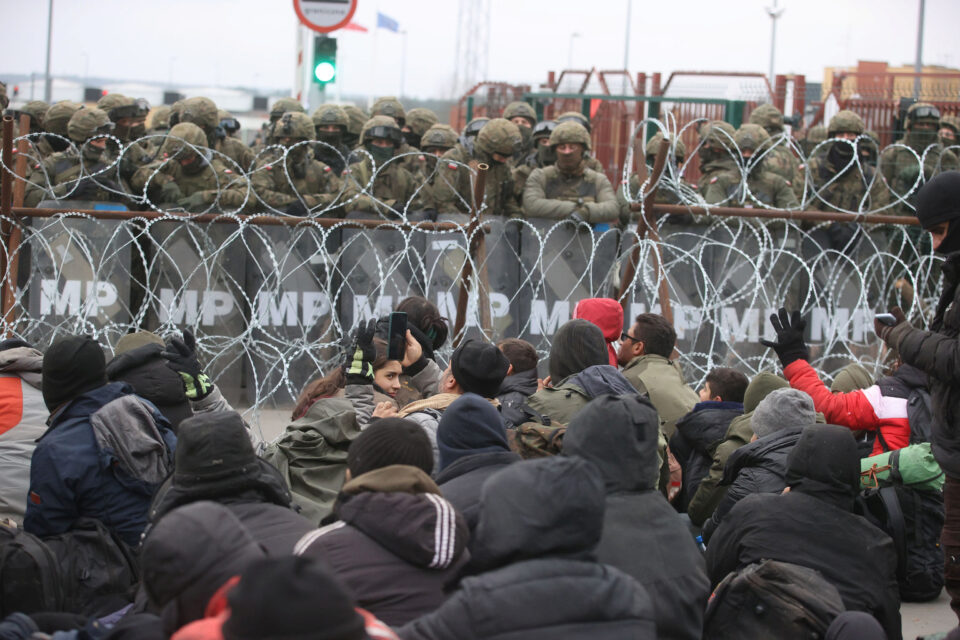 Migrants gather on the Belarusian-Polish border

Belarus is forcing migrants to breach its borders with the European Union, and the government of President Alexander Lukashenko must be held accountable for human trafficking, Lithuania, Latvia and Estonia said on Monday.

“We … condemn the actions taken by the Lukashenko regime instrumentalising migrants for political purposes,” the presidents of the three Baltic states said in a joint statement after meeting Polish President Andrzej Duda via video link.

The European Union has accused Lukashenko of orchestrating an influx of migrants to EU members Poland, Lithuania and Latvia to pressure the EU to back down over sanctions slapped on his government. Belarus has repeatedly denied the accusation.

“Thousands of people who flew into Belarus from Middle Eastern and African countries are being directed, in caravans, to storm the border of the European Union,” Lithuanian President Gitanas Nauseda told a news conference.

“It is obvious what Lukashenko’s regime and its allies want – to test unity of the Western world,” he added.

He said that “video recordings, pictures and other evidence” proved involvement of Belarus officials, as well as its close ally Russia in stirring up the crisis.

“This is illustrated by the obvious increasing activity of migrants travelling via Moscow (to the EU border), compensating for the loss of flights from Iraq to Minsk,” Nauseda said.

He did not give evidence to show routes via Moscow were being used. Russia has repeatedly denied any role in the movement of migrants to Belarus and on to its western borders with the EU.

European Union foreign ministers signed off on Monday on changes to the bloc’s sanctions framework, preparing the way for a new round of sanctions on Belarus as well as airlines and travel agencies moving the migrants.

Estonian President Alar Karis, Latvian President Egils Levits and Nauseda urged the European Commission to change EU laws to tighten asylum options and pay for barriers to be built on the bloc’s external borders, such as those with Belarus.

Lithuania and Latvia would join Poland if it decided to ask for emergency NATO consultation under Article 4 of the defence alliance’s governing treaty, the presidents of the two countries said.

Under Article 4, any ally can request consultations whenever, in the opinion of any of them, their territorial integrity, political independence or security is threatened.

“The integration of Belarus into the Russian military system is now a done deal. NATO needs to change its strategy and military plans accordingly”, Nauseda said.

The Kremlin did not immediately respond to a request for comment on the suggestions migrants were flying through Moscow and that Belarus was being militarily integrated with Russia.

How to avoid greenwashing in fast fashion industry