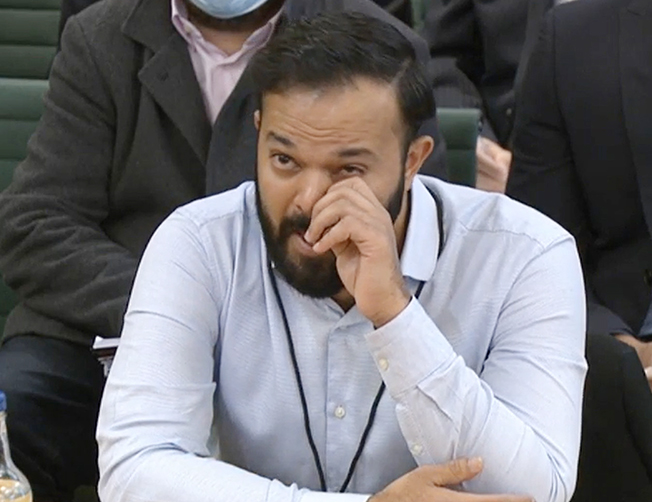 Former cricketer Azeem Rafiq cried as he gave evidence at the inquiry into racism he suffered at Yorkshire County Cricket Club, at the Digital, Culture, Media and Sport committee on sport governance

Yorkshire whistleblower Azeem Rafiq has laid bare the full extent of his harrowing experience of racism in cricket during an explosive and emotional appearance in front of MPs.

Rafiq has been waiting for the chance to air his full allegations in the public arena and Tuesday’s Digital, Culture, Media and Sport select committee hearing offered him the chance to speak with the protection of parliamentary privilege – a freedom he used to issue a raft of previously unheard claims.

As well as going into disturbing details of his time at Headingley, the 30-year-old took his accusations close to the top of the game, suggesting racially derogatory use of the term ‘Kevin’ by former team-mate Gary Ballance was “an open secret in the England dressing room”. He further alleged that another former England batter, Alex Hales, had given a dog the name because it was black.

Rafiq’s voice cracked and he fought back tears on several occasions, but he spoke with clarity and resolve for almost an hour and 40 minutes, interrupted only by one brief adjournment when emotion got the better of him.

Rafiq concluded that racial discrimination, and his decision to take a stand against it, had cost him his career in a sport that he feels has ingrained problems above and beyond his own story.

Most graphically of all, Rafiq revealed that as an aspiring 15-year-old club cricketer he had been restrained while red wine was poured down his throat by a former Yorkshire and Hampshire player.

Asked if he could identify a single individual who had stood up for him or called out acts of racism at the time, he was unable to summon a name, adding: “You had people who were openly racist and you had the bystanders. No one felt it was important.”

More than once, he said his mission was to shine a light on systemic patterns of discrimination and act as “the voice of the voiceless”.

In terms of specifics, Rafiq was clear that the word ‘P***’ was used “constantly” at Yorkshire and in the wider game, said he had heard the phrase “elephant washer” and experienced offensive references to corner shops. Ballance, he added, told another colleague not speak to Rafiq because “he’s not a Sheikh, he hasn’t got oil”.

He described how Moxon, who is currently signed off sick with a stress-related illness, “got me in a room and literally ripped shreds off me” on his return to the club after the stillbirth of his son. Later, he said an official complaint about bullying in 2017 directly led to his subsequent release, for fear that he may continue to raise issues around his treatment.

But there was also a broad sweep of fresh allegations over the course of the session.

Rafiq said 2005 Ashes winner Matthew Hoggard, once a hero of his and subsequently a team-mate, had phoned him to apologise for hurtful comments, and that he has raised a complaint about the conduct of another former England seamer, Tim Bresnan.

He claimed Jack Brooks, a two-time County Championship winner at Yorkshire, had started the disrespectful practice of calling India star Cheteshwar Pujara “Steve” during an overseas stint at the club.

Rafiq was scathing about the assistance offered by the Professional Cricketers’ Association, who represent the interests of all players in this episode, and the personal development manager he was assigned by the organisation, Matthew Wood. Wood, he claimed, was working “for Yorkshire, with Yorkshire” and not in his best interests.

On the subject of the Ballance’s use of the word ‘Kevin’, Rafiq explained: “Kevin was something Gary used to describe anyone of colour in a very derogatory manner. It was an open secret in the England dressing room.

“Anyone who came across Gary would know that was a phrase he would use to describe people of colour. Gary and Alex Hales got really close to each other when they played for England together. I wasn’t present in that dressing room, but what I understand (is) that Alex went on to name his dog ‘Kevin’ because it was black. It’s disgusting how much of a joke it was.”

On England captain Joe Root’s recent assertion that he could not recall any examples of racism at Yorkshire, Rafiq found it hard to reconcile his positive view of the individual with the culture that existed during their time together at Yorkshire.

“Rooty is a good man. He never engaged in racist language,” he said. “I found it hurtful because Rooty was Gary’s housemate and had been involved in a lot of the socialising where I was called a ‘P***’. It shows how normal it was that even a good man like him doesn’t see it for what it was. It’s not going to affect Joe, but it’s something I remember every day.”

The England and Wales Cricket Board (ECB) has appointed an independent commission for equity in cricket (ICEC), chaired by Cindy Butts, to examine the issue of race in the game and its call for evidence is now open.

Rafiq was sceptical about that process, stating: “Action is needed and needed now. To be honest, we are sick and tired of these equity commissions and inquiries. Sick and tired.

“All we are asking for is equality, to be treated fairly regardless of the colour of our skin or the religion we follow. Just respect as a human race. It’s 2021, we shouldn’t even be having this conversation.

“No one has ever been a whistleblower before, no one has ever had the courage to come forward because of the fear of not being believed. Do I believe I lost my career to racism? Yes, I do.

“Maybe what was written for me was this. I’m a massive believer that everything happens for a reason. I hope in five years’ time we are going to see a big change, that I did something far bigger than any runs or any wickets I got.”