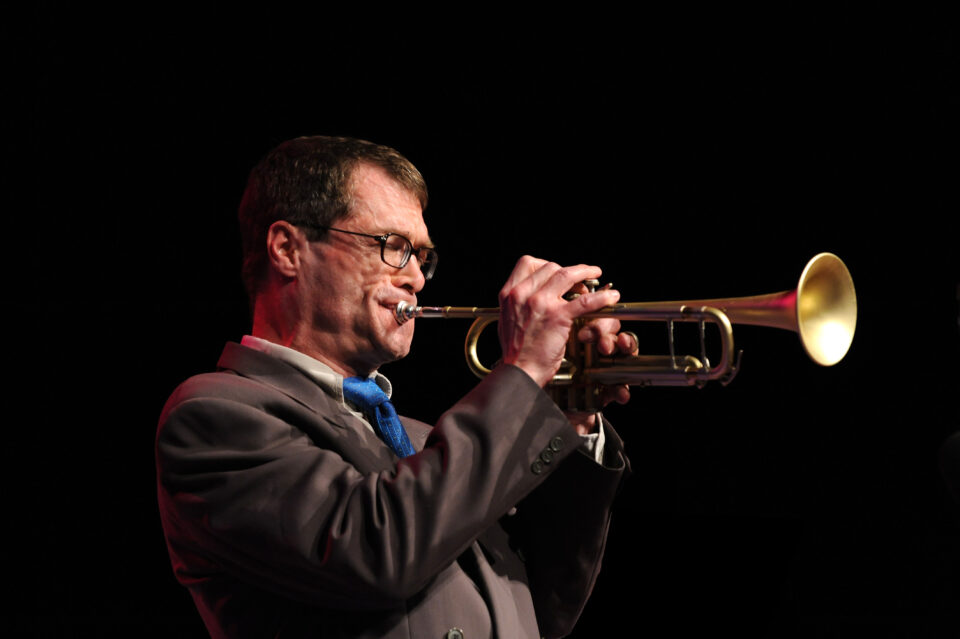 In a minor legend of the jazz scene THEO PANAYIDES meets a music nerd, a travelling trumpet player originally from America who says his lips are his livelihood

John Marshall is thinking about food. He’s a few hours from playing at Sarah’s Jazz Club in Nicosia – the third in a series of five gigs all over the island, organised by Cloud 10 Music Agency – and he needs to start planning. More and more, he says thoughtfully, he likes the idea of a single big meal in the late afternoon, that’ll keep him going through the concert and beyond; the other day in Limassol he had a “greasy chicken kebab” which did the trick, though it was also quite rich. Maybe fish would be better.

John has been doing this for a long time: “50 years professionally,” he muses, “60 years blowing a trumpet”. His face is baggy, one might say weather-beaten; the voice is hoarse, though surprisingly smooth when he sings (he’s a frequent vocalist as well as a trumpet player). He’s something of a music nerd, enthusing over songs and arrangements – last night’s set-list included mid-20th-century standards like ‘Come Rain or Come Shine’ – and he’s played with the best, some of the biggest names in jazz: Buddy Rich, Mel Lewis, Lionel Hampton, Ornette Coleman, Dizzy Gillespie… His lips are his livelihood, his trumpet the tool of his trade. “It’s a challenge,” he admits when I note that the trumpet (unlike, say, the drums) is a somewhat unlikely source of music: “To take this piece of pipe, and try to make something pretty with it”.

We sit at the Home for Co-operation down the road from the Classic, sipping herbal tea (it’s good for the voice) as he talks about his life – which divides quite neatly into decades, since he met his wife when he was 30 and took the job in Germany when he was 40. WDR was an excellent gig for a middle-aged musician: steady work, great salary, only 200 days a year – leaving plenty of time to organise quintets for mini-tours in Germany and beyond – and of course health insurance “which was very important, because it’s a catastrophe in the United States”. Earlier, his 30s were spent living in New York with his wife, playing as a session musician on recordings, Broadway shows, whatever he could find – and earlier still, his late teens and 20s were spent as a hungry young jazzman, touring with bands and amassing the kinds of stories he’d rather not share in a family newspaper.

He was born in Wantagh, Long Island, about an hour’s drive from New York City; a “privileged” background, he says more than once, though it doesn’t sound especially affluent (his dad was a music teacher in the public-school system). Was it a good childhood? “Oh!” exclaims John, and laughs out loud: “Well, that’s a big question. Like I say, I was a privileged guy and I got through high school and I – wasn’t successful with further education”. It may be that his early years were turbulent, nor does he seem especially close to his family (he has a sister, who lives out in Idaho): “I was kind of a lone wolf, you could say”. What’s certain is that his parents divorced around the time he finished high school – and John himself decamped to New York soon after, at the dawn of the not-so-swinging 70s, Plan A being to make his living as a jazz musician. There was no Plan B. 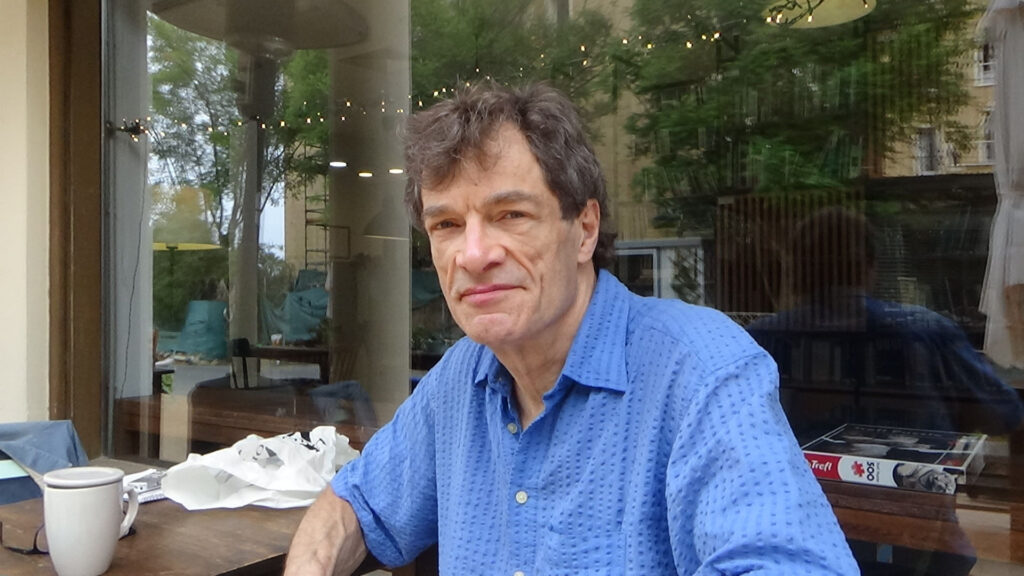 He had no contacts, no support system. “My mother used to send me carrot cake from Florida,” he recalls dryly. “Sometimes my father would give me taxi fare” – but he took the subway instead, and used the money for food. He crashed on a friend’s couch for a while, taking advantage of the “free jazz scene” which involved random people playing free-form jazz in random lofts – though John himself was already a decent musician, having taken years of private lessons and played with teenage bands of all descriptions. (His tastes were decidedly non-mainstream: he recalls when the Beatles came out – though he later grew to appreciate their songwriting – and “I heard it, but it seemed like children’s music to me compared to those Count Basie records”.) Even so, it wasn’t till the mid-70s that he started making enough to survive only from music.

“I was trying to find enough money to eat,” he recalls of those years, “so I did odd jobs. I delivered fried chicken. I drove a taxi at night – two or three nights a week – for a couple of years”. This was the old, seedy New York, the New York of De Niro in Taxi Driver. “I’ve been mugged. I’ve had a knife pulled on me, a gun pulled on me. Oh, I deserved it – I wasn’t street-smart yet!”

His break came when a childhood friend from Long Island (“We were the two who became musicians, the two crazy ones”) recommended him to Buddy Rich, the famous jazz drummer and bandleader. “There were no auditions with a band like that. You were hired, and you just showed up and tried to read the music, play the gig and not get fired… That’s why a lot of guys only lasted a week,” adds John acerbically. (Rich is described on Wikipedia as “notoriously short-tempered”.) In fact, “you could be fired at any moment. But that was a great incentive for your sight-reading, as we call it… The main thing is not to play a note where there should be no note. If you play the wrong note, you could get away with that”. An occasional mistake might be forgiven – but get it wrong two nights in a row, and you’d be on the next bus home.

John spent two years with the Buddy Rich band, two years of working – “Maybe every two weeks there’d be a night off” – and near-constant touring: “Packing your suitcase every morning, another bus ride, some hotel on the highway…” That’s the life of the travelling trumpet player, listening to music on tedious bus rides, passing through places you never really see: John had a free day in Istanbul once, doing typical tourist stuff – this was later, in 1988, playing third trumpet with the great Dizzy Gillespie – and it was such a rare event that he still remembers it. Sometimes, it’s true, they might stay in a big city for a week or more, in which case there’d be a hotel with a swimming pool and a few free hours before the gig. What would they do during the day? “Oh, various things. Practising. Going to a record store. Getting in trouble, you know?”

Trouble tends to follow musicians, especially jazz musicians. John’s all-time idol Charlie Parker died at 34, of cirrhosis and years of addiction; Fats Navarro, a great trumpet player, died at 26, also a heroin addict. John tries to live healthy these days, greasy chicken kebabs notwithstanding – he does yoga, and exercises for about half an hour in the mornings – but he wasn’t always so healthy. “I was a wild one,” he recalls of his youth, opting not to go into detail. “I was undisciplined in that respect… When I met my wife, my lifestyle became much more healthy. In my 20s, I was kind of – off the rails here and there. Yeah.”

That’s something you sense with John Marshall. He’s easy-going, of course – he could hardly have spent his whole life playing in bands if he didn’t have people skills – but there’s still a certain gruffness, a hint of steel. He’s street-smart, as he puts it. One can easily surmise that he’s been through some wild situations, and come out smarter and tougher.

He tries to get along with everyone, but “I don’t like to be made a fool of”; he almost never has to lose his temper – but when it happens, it happens. Music is his life, yet his approach to it is cool, shrewd, never airy-fairy or emotionally sloppy. What makes a good trumpet solo? “Rhythm, melody and harmony,” he replies instantly. ‘What about feeling?’ I ask – and he quickly agrees that “it has to be something that touches people” but even that relates to the audience, not the player necessarily. What exactly is his gift? How would he describe what he does? “Try to find a pretty melody and play it clean, with some feeling, that’s all,” he replies. Simple as that. 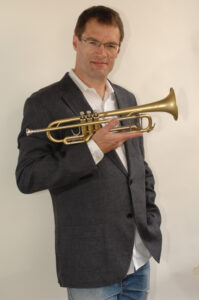 ‘Play it clean’, that’s a real musician’s phrase – and John comes across as a pro, a technician, a connoisseur, a safe pair of hands. He’s never slackened, always plugged away at it. “It’s not like I was born with a miracle lip,” he quips. “I’ve worked for whatever technique I have.” He lasted the course with Buddy Rich, learning to play quite aggressively (that was Buddy’s house style), then “I joined the Mel Lewis band and the lead trumpet player said ‘Hey, Marshall, whoa, take it easy! Back off on that rhythm a little!’”. He laughs: “So it’s always an adjustment. And if I was successful in New York, it was largely because I was a chameleon. I could listen carefully, and adapt to the style”. He has a “discerning ear”, unsurprisingly for someone who’s a jazz fan as well as a player – and he’s also, as mentioned, a technician, playing clean and never sloppy.

I’d never really thought very much about the trumpet before talking to John (like most casual fans I’ve always been distracted by the saxophone, that Cristiano Ronaldo of jazz instruments) – but there’s so much to learn. It’s physically demanding, for a start, among the most demanding of all instruments: “You use your whole body when you play”. Then there’s the question of lips and teeth, any dental issues being potentially ruinous. “If something changes with your teeth it’s a big adjustment,” he explains: “It’s a matter of millimetres but it’s part of your balance, how you put the horn up there”. Even mental state plays a role, any anger or tension in your body likely to ‘blow out’ the lip or make it more rigid. And of course, even if everything aligns, there’s still some intangible extra, some spark, some elusive voodoo – what he calls ‘the balance’.

“Things have to be perfectly in balance and perfectly synchronised to play something clean and pretty on a brass instrument. It’s a world in itself. And you’re always looking for the balance. Like Paganini said, ‘I have to find my technique anew every day’.”

I guess some nights are better than others?

He should know, after 60 years of trying – and it’s not over yet. How does he feel about turning 70 in a few months? Is it on his mind? “Sure,” he replies, and laughs: “Getting old is not for sissies”. It’s been quite a ride, playing jazz on three continents, turning into something of a minor legend in his own way, graduating from reliable chameleon to a vocalist and star attraction. His father always wanted him to become a teacher like himself, muses John, judging music to be way too risky. “It’s a gamble I took – but I’m still doing it so, even if the clock runs out today, I think I’ve won. Everything is gravy now”. I leave him to his tea and pre-gig rituals, briefly poring over Google Maps to direct him to a good fish restaurant.