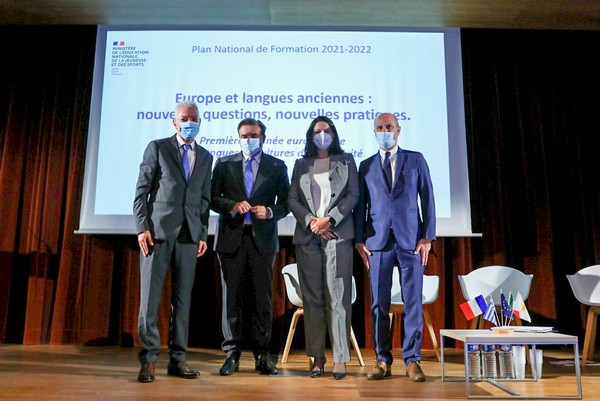 Cyprus, along with Greece, Italy and France agreed to cooperate to promote the teaching of ancient Greek and Latin languages, which, they said, are the common cornerstone of European and Mediterranean culture.

In a joint statement released on Wednesday after a conference in Paris on Europe and Ancient Languages that was held on Tuesday, the Education Ministers of Cyprus, Greece, France, and Italy said they will promote ancient Greek and Latin through bilateral and multilateral collaborations. This will also include exchanges and mobility of students and teachers, to create a global dynamic for new joint projects, “in the context of an inclusive approach and in accordance with the most modern and innovative aspects of modern culture.”

Academics, teachers, and researchers from the four countries took part in the conference, held at the historic Louis-le-Grand lyceum in Paris. The event, according to the education ministry, marked “the symbolic launch by the European ministers of an educational alliance for the teaching of ancient languages, which connects France, Greece, Italy and the Republic of Cyprus.”

The aim of the conference, the ministry added, was “to highlight that through Greek and Latin, which are the mother tongues of Europe, students can discover and better understand their own language and other European languages and develop critical thinking.”

The four ministers said that “Latin and ancient Greek are the living heritage which is the common cornerstone of European and Mediterranean culture and the vital force of their languages.”

These common roots, they added, promote and enhance rapprochement and exchanges between peoples. “Knowledge of ancient languages is a valuable and tangible asset for the acquisition of modern languages, the pursuit of higher education and personal integration in social, cultural and professional life and our lives as citizens,” the statement said.

They said their common desire is to put humanities at the front and centre in schools, “to demonstrate the timeliness and modern dimension of the Latin and ancient Greek languages, to promote their renewal and to develop their teaching to contribute to the strengthening of the future of the European Union.”

The ministers agreed to set up an international team of high-level experts whose mission will be to examine a global strategy for the promotion and development of Latin and ancient Greek and to submit new concrete proposals in this direction. Each year, the signatory countries will invite partner countries to also participate in their discussions.

Margaritis Schinas, Vice-President of the European Commission, who had addressed the event, welcomed this decision.

“As head of the European education area, I can only rejoice,” Schinas said. He said that mobility and freedom of cooperation in Europe must be made specific and accessible to all.

Schinas said that, for the first time, the European Commission is offering a very comprehensive and accessible set of tools to do this, as well as “unparalleled financial support.”