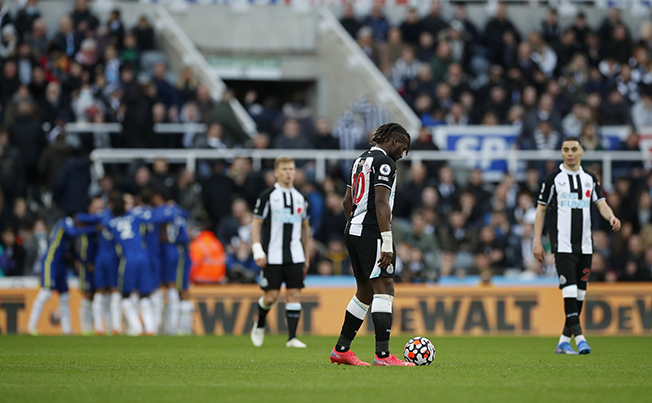 Match-by-match facts and statistics ahead of the 13th round of Premier League fixtures from Nov. 27-28 (times GMT):

* Arsenal have beaten Newcastle in 16 of their last 17 Premier League meetings, with Newcastle’s only victory coming in April, 2018.

* Newcastle are the only team in the top four tiers of English football without a win this season.

* Newcastle have conceded the most league goals (27) and are yet to keep a clean sheet. They have scored two more goals (15) than Arsenal.

* Palace have won their last three home fixtures against Villa.

* Palace are unbeaten at home in the Premier League this season (W2 D4).

* Villa have won only one away game this season (L5), 1-0 at Manchester United.

* Liverpool have won seven of their last eight Premier League games against Southampton but lost in January this year.

* Liverpool are the only team to have scored in every Premier League match this season.

* Southampton have lost 13 away matches this year, conceding 43 goals — both more than any other Premier League team.

* Wolves did the double over Norwich the last time they were in the Premier League.

* Wolves have won five of their last seven matches (D1 L1) to move up to sixth.

* Norwich have scored only seven goals this season, the worst record in the league.

* Leeds have lost eight of their last nine league meetings with Brighton in the Premier League and Championship.

* Brighton are on a seven-match winless run (D5 L2), dropping to ninth in the league.

* Leeds have lost on their last five trips to Brighton without scoring a single goal.

* Brentford have not won at home since beating Arsenal on the opening day of the season (D1 L4).

* Everton and Brentford have both taken one point from their last five Premier League matches, fewer than any other team.

* Tottenham have lost just once in their previous 12 Premier League meetings against Burnley (W8 D3).

* Spurs striker Harry Kane has only one goal in 11 appearances this season but has scored or assisted in each of his last six league games against Burnley (seven goals and three assists).

* Watford have never kept a clean sheet in 20 top-flight games against Leicester.

* Four of the last five matches between the sides had a goal in the 90th minute.

* Leicester striker Jamie Vardy has scored five Premier League goals against Watford, including in each of their last three home games.

* City have kept five clean sheets in six home games this season, conceding only in a 2-0 defeat by Palace last month.

* Chelsea are winless in their last seven league matches against Manchester United (D4 L3) since beating them in November, 2017.

* United have not conceded a goal in their last four Premier League meetings with Chelsea.