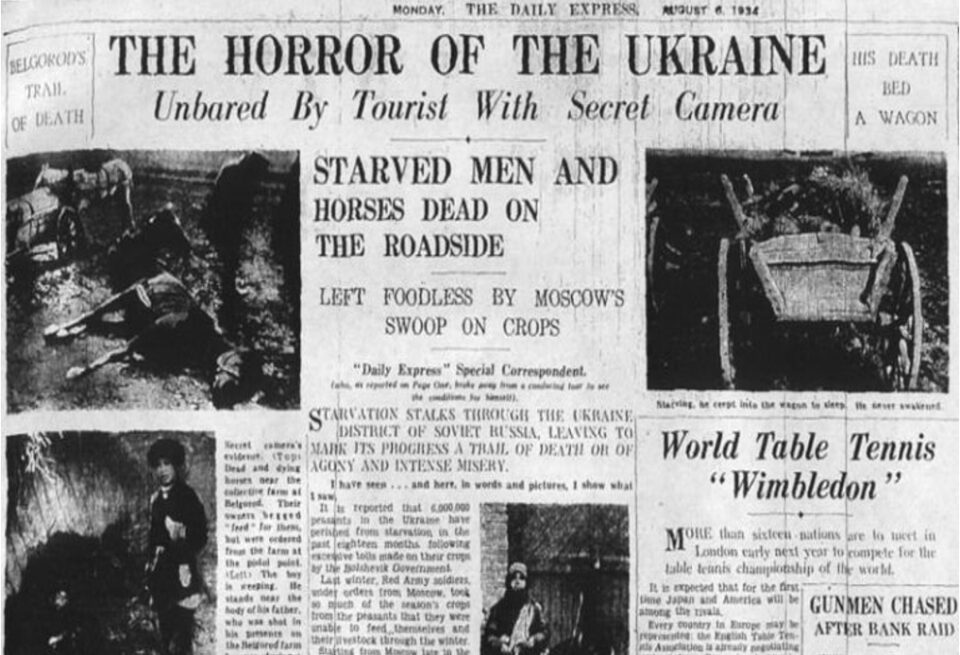 Every year on the fourth Saturday of November Ukraine pays tribute to the victims of one of the greatest atrocities in the history of humankind – Holodomor 1932-1933, the result of a policy of the Soviet Union communist government, aimed at physical elimination of millions of Ukrainians, including persons of other nationalities living in the country at that time.

‘Holodomor’ is formed from two words in Ukrainian: “holod” meaning hunger or starvation, depending on context, and “mor” meaning death or plague. It is likely that the word derives from the expression “moryty holodom” which means “to inflict death by hunger.”

It was committed by the leadership of the Soviet Union, which aimed at making Ukrainians obedient and the ultimate crushing of Ukrainian opposition regime that wanted to build a Ukrainian state independent of Moscow. It was a deliberate act of genocide of Ukrainian peasants aimed at suppressing the Ukrainian national liberation movement and the freedom aspiration of Ukrainians.

In 1928, the Soviet leadership announced a policy of collectivisation, by forcefully making individual private farms part of collective farms under state ownership. Each farmer had a certain number of workdays, that were paid for by natural products. However, the total number of workdays was so miserable that it denied the farmer the opportunity to feed him and his family. Bearing in mind the strong sense of individualism of Ukrainian farmers, the implementation of the collective farm system was strongly resisted in The Ukraine. That is why villagers were dragged into collective farms by force, terror and propaganda war against dissenters, whom the regime labelled “kulaks, bourgeois nationalists, and counter-revolutionaries” – sufficient reason to execute them.

The policy of the Soviet regime triggered resistance by Ukrainian people. Historians have recorded about 4,000 mass demonstrations by farmers against collectivisation, taxes, state terror and violence in the early 1930s.

The sense of national identity of Ukrainian peasants, combined with their individualism ran counter to the ideology of the Soviet Union. That was the basis of Ukrainian nationalism which was a threat to the unity and the existence of the USSR. This was why Stalin’s totalitarian regime came down so hard on the Ukrainian peasantry – they were a leading part of the country and the source of its spiritual and material strength.

In the early 1930s the policy of collectivisation in Ukraine collapsed. Peasants, en masse quit the collective farms and took their property back: livestock, stock and earned grain. To keep these farms and property in the hands of state, on August 7, 1932 the Soviet regime adopted a repressive resolution, which was known among the people as a “law of spikelets.” 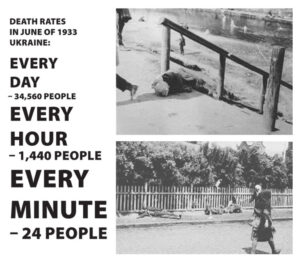 According to a resolution of CEC and Council of People’s Commissars of the USSR, “About protection of property of state enterprises, collective farms and cooperatives and strengthening social (socialist) ownership” all the collective property was state property and ‘stealing’ from it was harshly punished. The law punished starving peasants for harvesting the crop leftovers from fields with 10 years imprisonment, confiscation of property or execution. In fact, this law took away people’s right to feed themselves. According to this resolution a special group of individuals was formed to carry out searches of households in order to forcefully confiscate grain. Those searches were accompanied by terror, physical and psychological abuse of people. The next genocidal measure introduced food fines – the right of the state to take from peasants not only grain, but all the food and property that could be sold or exchanged for food. This inhuman measure was not enforced in any other Soviet republic. To boost the famine in Ukraine the Soviet Politburo, under pressure from Vyacheslav Molotov, on November 18, 1932, adopted a resolution which introduced an even more repressive regime – the “blackboards”. Inclusion in the “blackboards” meant food blockade of farms, villages, districts: this involved total removal of food, bans on trade and transportation of goods and a ban on relocation of peasants. These measures were enforced by military units, GPU, militia. In 1932 – 1933 the regime of “blackboards” was used only in Ukraine and the region of Kuban – in areas with a dominant Ukrainian population.

The Kremlin introduced an additional measure – a complete withdrawal of all food supplies – that made life for Ukrainians impossible. A resolution of the Communist Party and the People’s Commissars of the USSR ECP (B), on January 22, 1933, signed by Stalin and Molotov, forced Ukrainians to remain in territory without food, forbidding them from leaving the Ukrainian SSR and the Kuban to buy any bread. This measure was not applied to any other other administrative region of the USSR.

The Stalin regime declared famine in Ukraine non-existent, thus refusing the assistance offered by many foreign NGOs, including foreign Ukrainian communities and the International Red Cross.

In spring 1933 the mortality rate in Ukraine became catastrophic. The peak of Holodomor was in June. The death toll was 28,000 people a day, 1168 per hour or 20 people each minute. 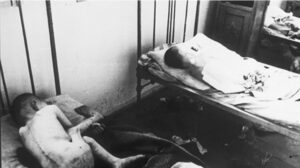 The exact number of deaths in Ukraine from Holodomor remains unknown. Most researchers estimate 7 million people died in the Ukrainian Soviet Socialist Republic and 3 million Ukrainians in other regions of the USSR: the Kuban, the Central Black Earth region, the Volga region and Kazakhstan.

The Soviet Union convinced the international community “not to see” the mass murder of Ukrainians through propaganda and bribes of journalists. However, there were journalists who wrote the truth, the reports of ambassadors and diplomats also documented what happened. The regime took some steps to erase the memory of the murder of more than 7 million Ukrainians, but the memory of the people cannot be wiped out, and with Ukraine’s independence the ban on talking about Holodomor was lifted.

Under the slogan “Ukraine remembers – the World acknowledges” we remind the world of the man-made famine and its millions of victims, as an obligation to those who died and the need to restore historical truth.

On November 28th, 2006, the Verkhovna Rada (Parliament of Ukraine) passed a decree defining the Holodomor as a deliberate Act of Genocide. In 2010, the Resolution of the Court of Appeal in Kyiv region said the genocidal nature of Holodomor, proved the intention of Stalin, Molotov, Kaganovich, Postyshev, Chubar, Khatayevych, Kosior to destroy a part of the Ukrainian nation.

Although the Russian government continues to call Ukraine’s depiction of the famine a “one-sided falsification of history,” it is recognised as genocide by approximately two dozen nations, and remains the focus of numerous international researchers.

The tragedy of the Holodomor must always be remembered by current and future generations underlining the vital importance of unconditionally respecting human rights and above everything the right to life. This is the way to avoid a repetition of this.

Ruslan Nimchynskyi is Ambassador of Ukraine to the Republic of Cyprus

Independent Poland as the foundation of Western security

Sahel region poses a real challenge for the EU

Where are the policies?