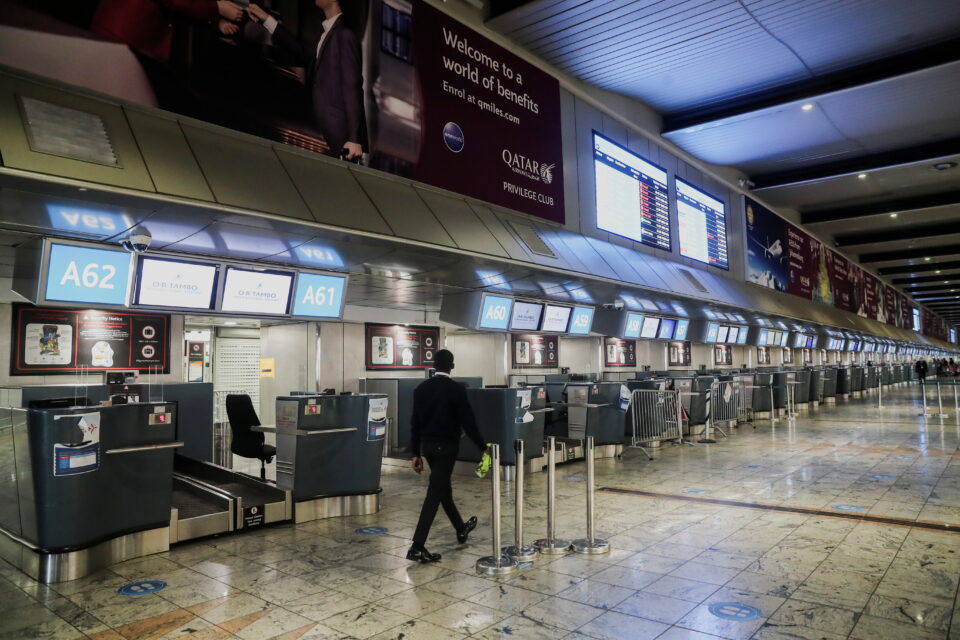 The World Health Organisation (WHO) said on Monday the Omicron coronavirus variant carried a very high risk of infection surges as more countries closed borders, casting a shadow over economic recovery from the two-year pandemic. Big airlines acted swiftly to protect their hubs by curbing passenger travel from southern Africa, fearing that a spread of the new variant would trigger restrictions from other destinations beyond the immediately affected regions, industry sources said.

But shares in carriers bounced back with the rest of the market on Monday after Friday’s rout as hopes grew that the variant might prove to be milder than initially feared.

The WHO advised its 194 member nations that any surge in infections could have severe consequences, but said no deaths had yet been linked to the new variant.

“Omicron has an unprecedented number of spike mutations, some of which are concerning for their potential impact on the trajectory of the pandemic,” the WHO said.

“The overall global risk related to the new variant of concern Omicron is assessed as very high.”

Further research was needed to understand Omicron‘s potential to escape protection against immunity induced by vaccines and previous infections, it added.

US President Joe Biden said the new variant was a cause for concern but not panic and that everyone should get their shots. He said it would be weeks before the world knew how effective current vaccines would be against it.

“Sooner or later we are going to see cases of this new variant here in the United States,” Biden said. “Please wear your mask when you’re indoors, in public settings around other people.”

He said he did not think additional curbs were needed.

An infectious disease expert from South Africa, where scientists first identified Omicron, said it was too early to say whether symptoms were more severe than previous variants, but it did appear to be more transmissible.

South African cases were likely to exceed 10,000 a day this week, rocketing up from barely 300 a day two weeks ago, Karim added.

But South African President Cyril Ramaphosa denounced “unjustified and unscientific” travel bans that damage tourism-reliant economies. His country has said it is being punished for its scientific ability to detect new variants.

Health ministers from the Group of Seven bloc of wealthy nations praised South Africa for its “exemplary work” in detecting the variant and alerting others, a sentiment echoed by Biden.

Fears the new variant might be resistant to vaccines helped wipe roughly $2 trillion off global stock markets on Friday but markets settled down again on Monday, even after Japan said it would close its borders to foreigners.

US Commerce Secretary Gina Raimondo said on Monday it was too soon to tell if Omicron will have any impact on global supply chains.

The prospect of a fast-spreading variant has raised fears of a return of the sort of restrictions that shut down a swathe of industries in 2020.

“This is new,” Nissan Motor Co’s US spokeswoman, Lloryn love-Carter, said. “We’re monitoring of course, but we still have a lot of pretty strict Covid protocols in place.”

Travellers stranded at Johannesburg international airport said they felt helpless as flights from South Africa were cancelled. “We don’t know what to do, we are just waiting here,” said Ntabiseng Kabeli, from Lesotho.

Japan described its ban on arrivals by foreigners as precautionary.

In Israel, a ban on arrivals by foreigners took effect overnight.

“The people of Africa cannot be blamed for the immorally low level of vaccinations available in Africa – and they should not be penalised for identifying and sharing crucial science and health information with the world,” he said.

Guterres has long warned about the dangers of vaccine inequality around the world and the risk that low immunisation rates are a breeding ground for variants.

More than 261 million people in over 210 countries have been reported to be infected by the coronavirus since the first cases were identified in China in December 2019 and 5,456,515​ have died, according to a Reuters tally.

The new variant was discovered just as many parts of Europe were suffering a fourth wave of coronavirus infections as winter grips the continent in the runup to Christmas, with more people gathering indoors and increasing the risk of infection.

European Central Bank chief Christine Lagarde tried to reassure investors that the eurozone could cope with a resurgence.

“We now know our enemy and what measures to take,” she told Italian broadcaster RAI late on Sunday. “We are all better equipped to respond to a risk of a fifth wave or the Omicron variant.”