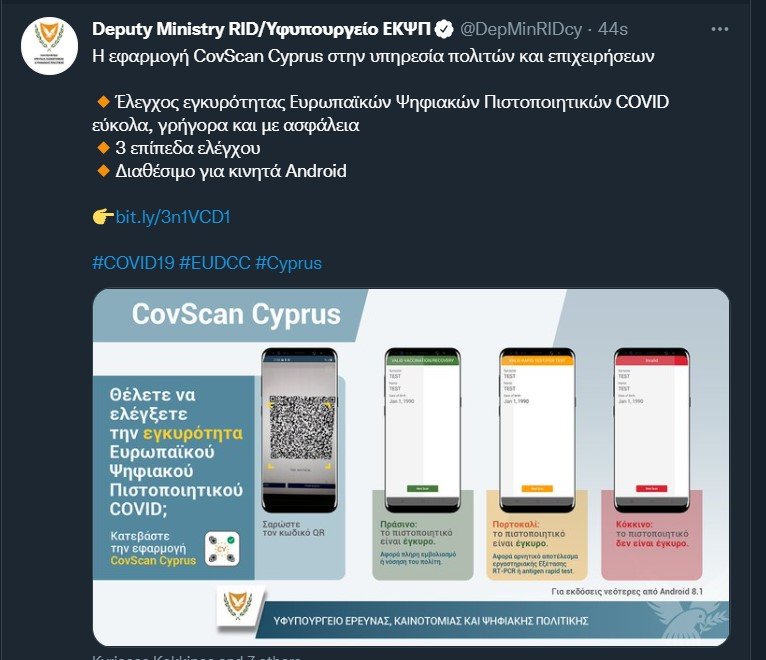 Electronic scanning of EUDCC certificates should not be carried out using personal cell phones, the commissioner for personal data protection has reiterated following reports that businesses are using the CovScan application on personal devices.

Checks using the CovScan app became mandatory as of November 22 for businesses, companies and organisations with a capacity to host ten people or more, thus requiring them to show a SafePass.

In fact, there are authorities ‘checking the checkers’ to make sure establishments keep track of the people entering their premises and ban anyone without a valid coronavirus vaccination or test certificate.

These include police, and officers from the labour inspection department and health ministry.

However, no one appears to be checking how the checks are carried out.

The Cyprus Mail has received several complaints from people who said they had their certificate scanned by an employee’s personal phone in different stores in the government-controlled areas.

“The bakery at my neighbourhood, which hadn’t been checking for a SafePass, recently started electronic scanning, using employees’ mobile phones,” Maria Papastavrou, a Paphos resident told the Cyprus Mail.

“A number of people have told me they had a similar experience as well, and I don’t think that’s right,” she added.

Stephanie Philippou also said she visited a video game store where the manager, whom she knows personally, used his cell phone to scan customers’ SafePasses.

“I believe this should not be happening. It looks unprofessional and it is quite sketchy,” Philippou said.

The commissioner for personal data protection Irene Loizou Nikolaidou told the Cyprus Mail that based on GDPR, this is a personal data issue.

Firstly, she said, no employer can oblige an employee authorised to check certificates to download the app on their personal device. This is because “employees are seldom in a position to freely give consent to employers due to the nature of their relationship”, she explained

On the other hand, personal phones are harder to check, and there is a possibility that there is an illegal app downloaded on them as well, Nikolaidou added.

The commissioner explained that mobile phones can be used for electronic scanning as long as they belong to the company and are used for this specific purpose.

She added that “if no one complains, no one will check,” but no official complaints have been made to the relevant authorities on the matter yet.

Police spokesman Christos Andreou said that “when it comes to businesses, they can download and use the application to any mobile phone device. This is why the application was created, to make checks easier.”

When asked whether there is an issue for companies to use personal devices to check customers he said, “this is not a criminal matter” and that “it is not a matter for the police,” to check.