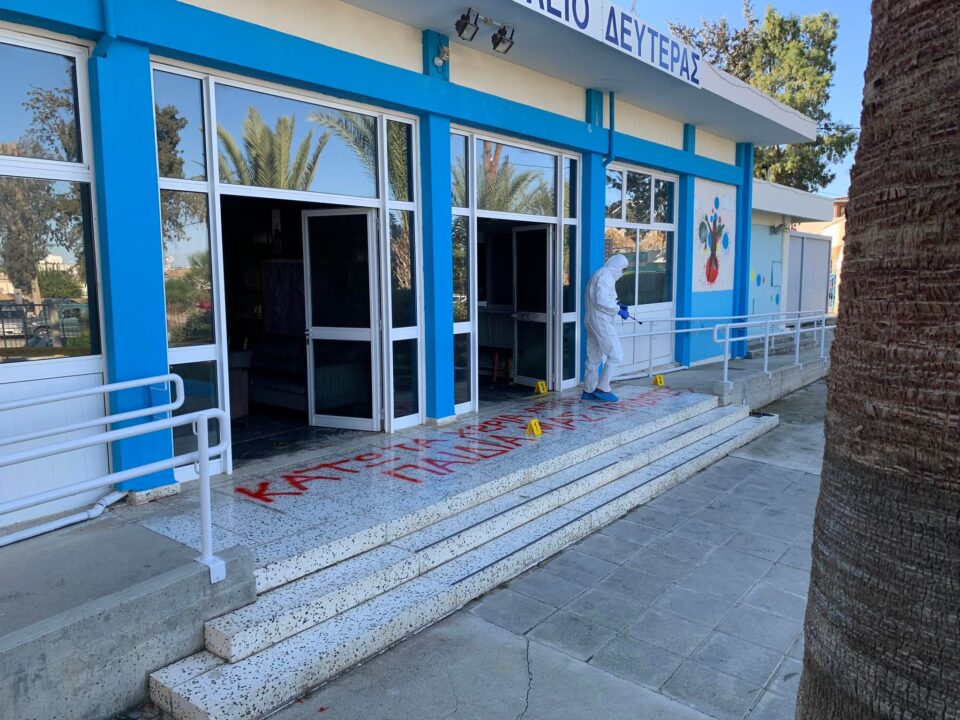 Slogan at the entrance of the school in Deftera (Christos Theodorides)

Police on Thursday were investigating a bomb attack at a Limassol primary school and what appeared to be an arson at a Nicosia primary school, with both incidents thought to be related with government measures to stop the spread of the coronavirus that involved children.

The education ministry condemned the incidents as common criminal acts, and appealed to society to reject violence.

In Limassol, an improvised explosive device had been placed at a primary school in Zakaki at around 1.30am. A second device placed at the school had failed to go off.

Doors and windows were smashed in the explosion while some school equipment was damaged. The windows of a neigbouring church were also shattered.

“It appears the explosive device is large, it is a cylindrical object, and we cannot tell how much damage it would have caused if it had exploded,” Limassol CID chief Marinos Vasiliou said of the second device.

The bomb squad collected the device and were trying to determine whether it was the same type as the one that went off.

A member of the school’s parents’ association condemned the act, which also forced authorities to shut down the facility for Thursday.

“It is saddening to come to the school in the morning and find no children,” Michalis Savvides said.

Later in the morning, a fire broke out at the Deftera primary school in Nicosia, which will aloso remain closed on Thursday.

According to fire service spokesman Andreas Kettis, two fire engines responded around 7am and extinguished the blaze which destroyed the stage at the event hall of the school.

Indications are that the fire was set deliberately, Kettis told Cyprus Mail.

On the floor outside the hall, there was a slogan in red spray paint reading “hands off our children, traitors”.

The education ministry condemned the attacks, urging society to keep violence out of schools.

“We stand by our educators, we have a duty to protect our pupils and seek ways to shut out violence and bullying from schools,” the education ministry said.

Education cannot be intimidated through practices of social pathology “nor can we allow school administrations and teachers to suffer attacks.”

“We consider the incidents recorded these days as common criminal acts that should be dealt with as such,” the ministry said.

Primary school teachers’ union Poed condemned the “terrorist attacks”, as it scheduled a meeting on Thursday to discuss how to react.

“We condemn the terrorist actions at schools and call on the entire society to stand by us,” Poed head Myria Vasiliou said in a post on social media.

Vasiliou said no tolerance should be shown to those who sought to create tension.

“It is inconceivable for reaction to the measures … to be expressed this way.”

The incidents came as some parents continue to protest government measures mandating protective masks and tests at primary schools in a bid to stop the spread of the coronavirus.

Teachers have also received threats from parents who have refused to send their children to school.

Chairman of the House education committee, Diko MP Pavlos Mylonas, revealed Thursday that the headteacher of a Nicosia primary school had been beaten but he was too scared to report the incident to police.

Mylonas said the teacher was assaulted on Monday by the father of a pupil because he would not allow the child enter the classroom without a mask and a rapid test.

On Monday, an explosive device had been placed at the district offices of the education ministry in Limassol but had failed to go off.