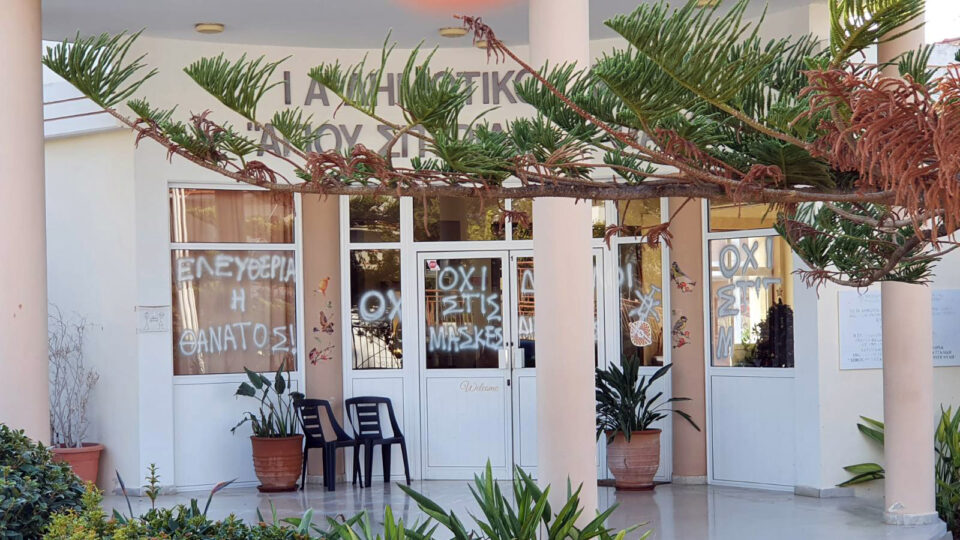 Photo: CNA Graffiti sprayed on the school in Paphos

The education ministry and federation of parents’ associations on Tuesday condemned the vandalism at another primary school where culprits wrote slogans against the new face mask mandate and coronavirus testing for children as young as six.

Photos circulating in the media showed slogans on the walls and floor of the Ayios Spyridonas primary school in Paphos that appeared late on Monday, reading “no to the masks”, “teachers, dictators”, “freedom or death”, “hands off our children” and “sheep”.

Speaking to the Cyprus News Agency, official of primary education at the Paphos branch of the education ministry Demetris Mikellides said the incident concerns pure vandalism, adding that the incident caused sadness and shame to any “reasonable person who loves democracy and respects this place”.

He said such actions intend to interrupt the smooth operation of schools for a minority to pass on their beliefs, which are against “logic and science”.

Primary schools will continue their operation as normal and “extremists” will not be allowed to create such situations, Mikellides added.

“Our children have once again experienced vandalism slogans,” Taliotou said, adding that police have been informed and are investigating the case.

The school board immediately intervened and cleaned the school, media reported.

The vandalism comes as authorities investigate a fire that broke out at a Deftera primary school in Nicosia and a bomb that exploded at a primary school in Zakaki, Limassol last week as well as one recorded assault against a headteacher over the new measures.

Following the incidents, the government on Friday decided to place guards at some schools after hours and increase police patrols while installing alarms and security cameras was also mooted.

According to Education Minister Prodromos Prodromou, the measures, which are expected to be put in place as soon as possible, are not permanent but are likely to last a couple of months.

The new restrictions were announced as part of the government’s efforts to prevent the spread of coronavirus infections as experts warned there was an increase in students, including primary school children, testing positive to Covid-19.

On Tuesday, health ministry advisor Petros Karayiannis told the media that about 500 children aged between 6 and 11 tested positive to Covid over the last few days, while another 400 cases were reported in teenagers aged 12 to 18.

These are expected to increase in the coming days as health ministry spokesman Constantinos Athanasiou told Philenews there were about 40 active clusters in schools.