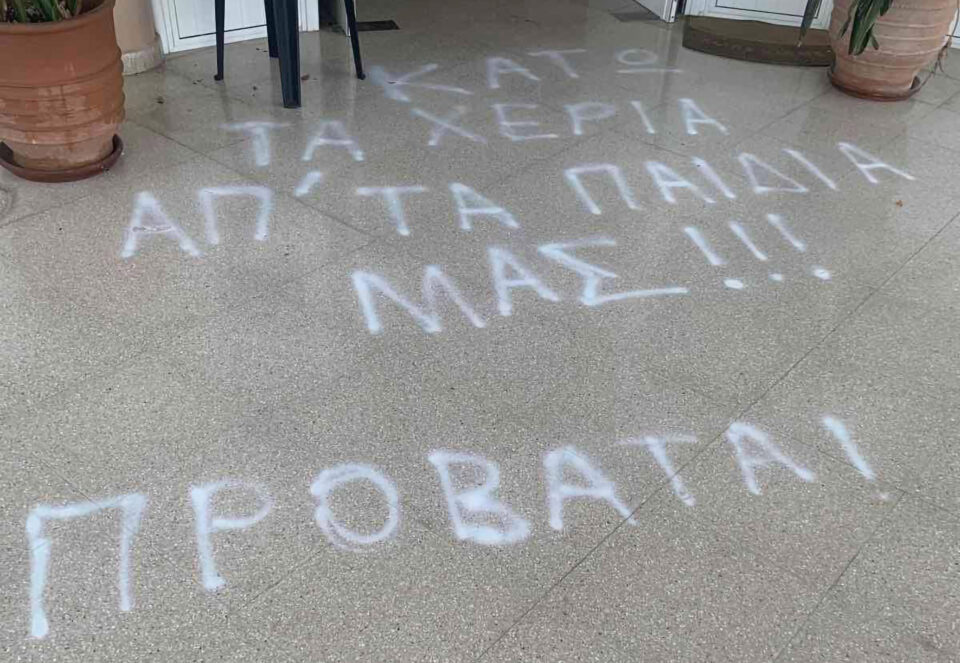 Most primary school children follow the mask and testing mandates imposed last week, the education minister said on Tuesday as those opposing the move continued to destroy property, this time spray painting slogans at a school in Paphos.

Minster Prodromos Prodromou reiterated that the government decree aimed at protecting children’s health, the health of the teachers and other staff and ensure that schools would remain open.

“I don’t believe a parent would want their child to get sick and not know they had contracted the virus… or would want to send the child to school, transmitting the coronavirus to other children and the homes of other people,” Prodromou said.

In the second week of the measures, it appeared absences were falling, according to the minister.

On Monday, just 1.93 per cent of 47,232 primary school children were absent from school because of the mandates.

If the children who were absent because they were either ill or close contacts were not taken into account, it appears that almost all the rest, close to 90 per cent in all districts, went to school, the minister said.

He said 89 per cent went to class normally on Monday, with 9 per cent being absent either because of the pandemic or for other valid reasons.

The new restrictions – facemasks and weekly testing for children from the age of six – were announced as part of the government’s efforts to prevent the spread of coronavirus infections as experts warned there was an increase among pupils, including primary school children.

On Tuesday, health ministry advisor Petros Karayiannis said that about 500 children aged between six and 11 had tested positive to Covid over the last few days, while another 400 cases were reported in those aged 12 to 18.

Despite official explanations, some angry parents have repeatedly taken to the streets to protest while two bomb attacks – one failed – against a primary school in Limassol and the education ministry’s office in the district – and a school arson in Nicosia have also been recorded.

It was Paphos’ turn on Tuesday, with vandals spray painting graffiti on the walls and windows of Ayios Spyridonas primary.

Slogans read “no to the masks”, “teachers, dictators”, “freedom or death”, “hands off our children” and “sheep”.

The district’s head of primary education Demetris Mikellides said it was clear vandalism, adding that the incident caused sadness and shame to any “reasonable person who loves democracy and respects this place”.

He said such actions intend to interrupt the smooth operation of schools so that a minority can force through their beliefs, which are against “logic and science”.

Primary schools will continue their operation as normal and “extremists” will not be allowed to create such situations, Mikellides added.

The school board immediately intervened and cleaned the school.

The vandalism comes as authorities investigate a fire that broke out at a Deftera primary school in Nicosia and a bomb that exploded at a primary school in Zakaki, Limassol last week as well as one recorded assault against a headteacher over the new measures.

Following the incidents, the government on Friday decided to place guards at some schools after hours and increase police patrols while installing alarms and security cameras was also mooted.