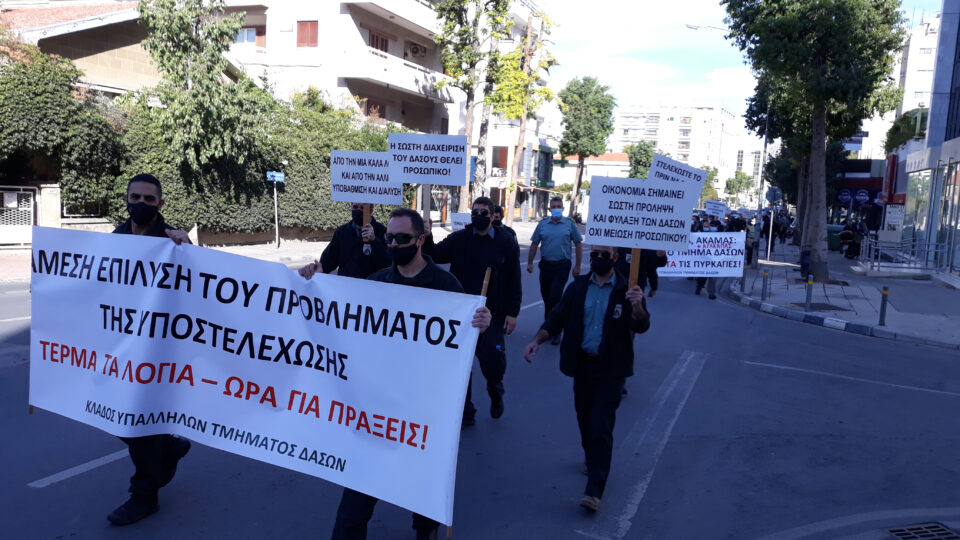 The employees gathered outside the finance ministry on Friday morning, before marching to the presidential palace to hand in a resolution to the presidency.

The decision to stage the work stoppage was taken by secret ballot with 92 per cent of employees voting in favour.

A spokesman told CyBC radio that employees have also authorised further action if the issue is not resolved through the 2022 state budget that is scheduled to be discussed by the plenary on Thursday.

The employees are protesting failure by the state to restore 27 positions that were scrapped in 2012 to 2015 and the filling of another 28 positions of forestry officer, an entry-level post, which although unfrozen, have still not been filled.

They say that understaffing poses not only a danger to the island’s forests but to the health and safety of employees. They have also clarified that these are just the department’s immediate needs in order to operate “at tolerable levels”.

But the finance ministry countered that every effort has been made to bolster the forestry department in human resources and in firefighting equipment and infrastructure, within the state’s financial capabilities and with a view to protecting the island’s natural wealth.

“It appears, however, that the employees branch of the department is exploiting the sensitive sector of work so as not promote its demands, giving mistaken impressions which do not reflect the government’s effort to boost the forestry department, and more generally to modernise and bolster system to deal with fires,” the ministry said in a statement.

It added that as regards the forestry department, the state budget for 2022 includes the creation of 10 new civil service posts and 112 additional hourly-paid government personnel.

To help protect forests and to combat forest fires, another 98 additional positions of forestry worker’ forest firemen and another 14 positions in other hourly-paid professions associated with the responsibilities of the forestry department, it added.

The ministry said that all vacant positions of forestry officer which the House finance committee recently excluded from a ban on filling of new posts have been unfrozen.

The forestry department currently has 54 vacant positions of forestry officer which represents 31 per cent of approved permanent posts (172).

Beyond the permanent staff, also serving at the forestry department are 37 forestry officers on contracts graduates of the forestry college who cannot be terminated.

The ministry also noted that other than staffing, the forestry department must give priority to adopting modern firefighting methods such as through mobile coordination centres, wind measuring equipment and use of drones among other, it concluded.