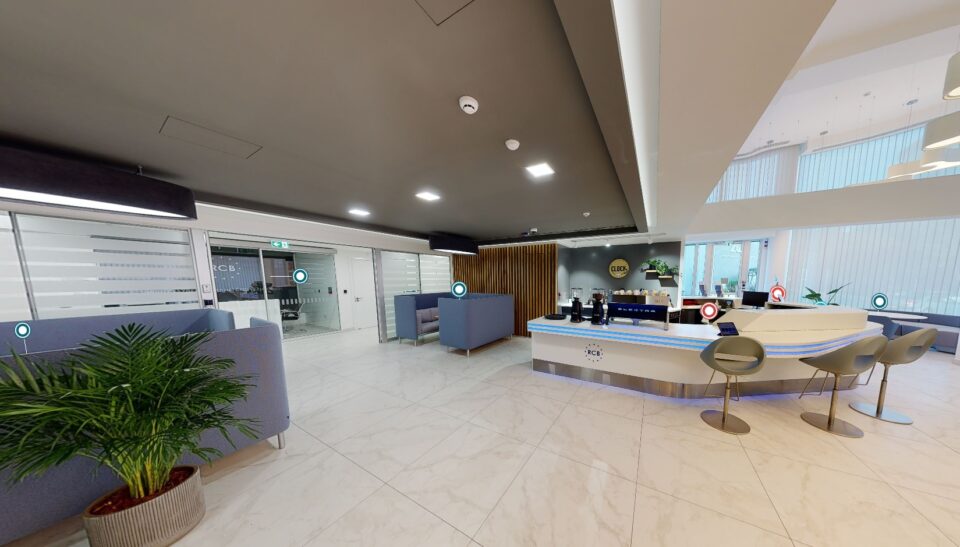 The RCB Banking Centre in Nicosia

RCB Bank CEO Kirill Zimarin earlier this week presented the bank’s new Nicosia Banking Centre, in conjunction with his thoughts on the banking sector, explaining that the relationship between banks and customers is a fluid and dynamic one.

Zimarin, who was speaking at the ninth iteration of the Banking Forum in Nicosia, said that the bank views its customers as strategic partners, with this being reflected in the expanded area designed and created to accommodate them.

“Gone are the days where the image of a branch was that of tills and queues,” Zimarin said.

“We must think of banks as places where ideas can be discussed, plans examined and support is given for them to grow,” he added.

The RCB Bank CEO also explained that banks should be the spaces where the future of the real economy is discussed, facilitated by a new generation implementing innovative business projects and ideas.

The bank has launched a new campaign to showcase the new centre’s areas and services starring Anna Vissi, whose concerts in aid of the ‘Sophia for Children’ foundation the bank has been supporting for several years.

The total number of building permits issued in the period between January and September of 2021 increased by approximately 18 per cent year-on-year according to the Cyprus Statistical Service (Cystat), while the total value dropped by 4.6 per cent.

In pure numbers, the number of building permits issued between January and September 2021 came up to a total of 6,008 marking an increase of 17.7 per cent year-on-year.

The number of housing units recorded an increase of 13.8 per cent, Cystat added.

In terms of the total value, this amounted to €1.87 billion, reflecting a decrease of 4.6 per cent year-on-year, while the total area of the building permits issued marked an increase of 7.6 per cent.

All districts recorded an annual increase in the period between January and September.

Larnaca registered the highest rise with 44 per cent year on year, followed by Paphos with 27.3 per cent, Limassol with 13.7 per cent, Nicosia with 10.17 per cent and Famagusta with 3.25 per cent.

In September alone, 768 building permits were issued, an increase of 11.3 per cent year-on-year.

The total value of those permits reached €206.2 million, while the total area came up to 210.7 thousand square metres.

Alpha Bank Cyprus CEO Konstantinos Koutentakis earlier this week spoke on the bank’s digital transition and all of the innovations that have been implemented in order to reshape its business model.

Koutentakis addressed the audience at the Cyprus Banking Forum and FinTech Expo held in Nicosia.

During his speech, Koutentakis presented the importance of the digital transition and the opportunities it offers, both to banking organisations and to consumers.

In particular, he said that while the COVID-19 pandemic created a difficult economic environment, it provided an opportunity for banks to reshape their future so that it fits into the new, emerging financial ecosystem, with cooperation between banks and the Fintech industry being mutually beneficial.

He added that Alpha Bank works closely with the fintech community and supports innovation that is relevant to both the market and society.

The main Cyprus Stock Market Index was at 66.34 points at 13:27 during the day, reflecting a drop of 0.24 per cent over the previous day of trading.

In terms of sub-indexes, the main index fell by 0.55 per cent, while the investment firm index dropped by 2.44 per cent.

Meanwhile, the alternative index rose by 0.11 per cent, while the hotel index remained stable.

The biggest investment interest was attracted by the Bank of Cyprus (no change), Pandora (+2.94 per cent), Alkis H. Hadjikyriacos (no change), the Cyprus Cement Public Company (no change) and Vassiliko Cement Works (no change).