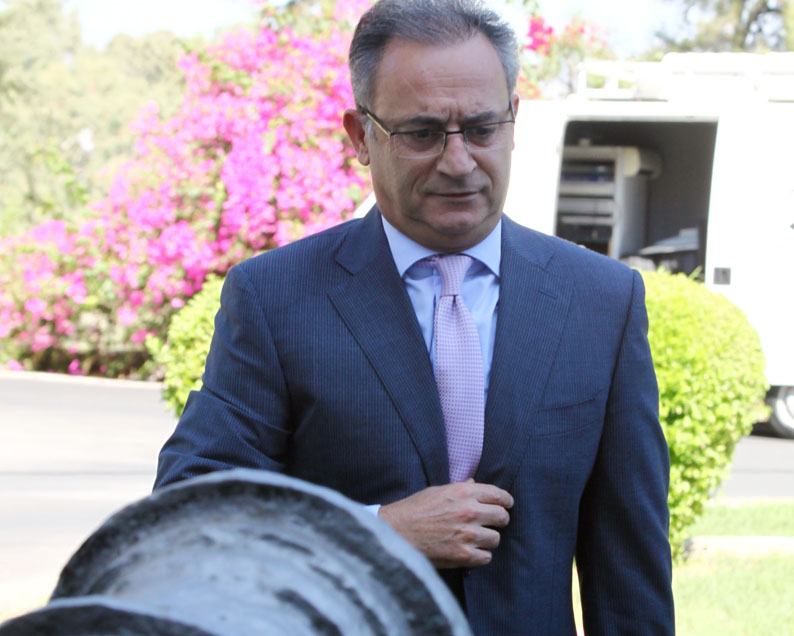 A showdown is on the cards within ruling Disy over who will stand for the party in the 2023 presidential elections. Party boss Averof Neophytou has laid down the law, taunting Foreign Minister Nikos Christodoulides to come clean on his intentions – or else risk being left out in the wilderness.

Observers say Neophytou had no choice but to throw down the gauntlet – in effect seeking to draw Christodoulides out into the open and formally declare his interest in the presidency. It’s widely felt that the foreign minister has been running a stealth campaign, promoting himself as a presidential persona but using his state office as a platform to do that.

Last week Neophytou convened the party’s political bureau and set the process in motion – Disy members must express an interest in running for the top office of the land on January 10. That will kick off the primaries inside the party, culminating in an electoral congress on March 12 when approximately 1,800 delegates will select (by secret ballot) their party’s presidential nominee for 2023.

Despite being a member of the political bureau, Christodoulides was conspicuously absent from the proceedings. His excuse: he had prior engagements, attending a function at the Israeli embassy and later a book presentation. Instead, the minister sent a letter where he outlined his views, namely that he thought the selection process was being rushed.

His no-show irked his colleagues in Disy, with Finance Minister Constantinos Petrides particularly scathing at the apparent snub. It didn’t help that the political bureau session lasted for some five hours – plenty of time for Christodoulides to have made it.

But the resentment aired there also revealed a great deal about the sentiment inside Disy towards Christodoulides – particularly among the party powerbrokers. Perhaps that is precisely why the minister stayed away – to dodge a direct confrontation.

In effect Averoff wanted to checkmate Christodoulides – either you toe the line and throw your hat in the race via the designated party procedure, or you’re on your own.

According to a political insider, Averoff probably knew that Christodoulides wouldn’t show up.

“He was calling him out, plain and simple. It was a tactical move by Neophytou and, in political terms, a necessary one,” said the source who requested anonymity.

“At the end of the day, what this amounts to is a tussle between Neophytou’s and Christodoulides’ presidential ambitions.”

Political analyst Christoforos Christoforou agrees here: “Neophytou was trying to pull the rug from under his feet.”

Still, the Disy chief does have reason for concern: a poll published back in November showed Christodoulides was the most popular candidate for president, garnering 32.2 per cent. It wasn’t even close for Neophytou, who got 7.1 per cent. Only a snapshot in time, some might argue.

Yet Neophytou, a seasoned political operator, has the advantage of leveraging the party apparatus. But will it be enough?

Christoforou puts a question mark on that, noting that party-political influence on the electorate has waned in recent years. Meaning a presidential candidate needs to appeal to an audience beyond his party to have a fighting chance.

On the other hand, Neophytou’s ploy – as far as ploys go – did work. Christodoulides now faces a dilemma – should he declare his intention to run for president, he may have to step down as minister. But then if he does quit, that would strip him of the very platform for exposure he has been using all along. A bit of a Catch-22.

It’s this conduct, this ‘covert’ campaign, that has vexed many in the Disy camp.

Christodoulides often attends functions unrelated to his ministerial portfolio – like a workshop on drug addiction. And his spouse, who also works in the foreign ministry, has appeared more than once on get-to-know-you television shows.

“I think at this point there’s little doubt that he [Christodoulides] is using state resources to cultivate a presidential image,” offers Christoforou.

Asked why President Nicos Anastasiades has put up with this behaviour, not forcing Christodoulides to show his hand, the first source guessed that the president may not want to exacerbate a rift within Disy.

“In a way, Anastasiades is caught in the middle of a power play between his minister and Neophytou.”

Christodoulides was missing from the Cyprus delegation attending the trilateral summit held in Israel last Tuesday – leading some to speculate this was a form of ‘hazing’ by Anastasiades. Although Christodoulides did travel with the president to Spain later in the week.

Whatever the case, the same source says that the walls are closing in – left without a government job, Christodoulides (who incidentally has four children) would have no steady source of income.

And the University of Cyprus – where Christodoulides once taught history – has already made it clear that it won’t hold his prior position for him. In fact the case had gone to court, and Christodoulides lost.

The 48-year-old began as a career diplomat in 1999 and served as one until 2013. During this time he served as director of the Office of the Minister of Foreign Affairs of the Republic of Cyprus, spokesperson of the Cyprus Presidency of the Council of the European Union in Brussels, deputy chief of mission at the Embassy of Cyprus in Greece, director of the Office of the Permanent Secretary of the Ministry of Foreign Affairs, and consul general at the Cyprus High Commission in the United Kingdom.

Prior to his appointment as foreign minister in March 2018, Christodoulides served as director of the Diplomatic Office of the president between 2013 and 2018, and government spokesman between 2014 and 2018.

The Cyprus Mail reached out to Harris Georgiades, a former finance minister and currently the deputy leader of Disy.

We asked Georgiades whether Disy may have boxed themselves in, by insisting on fielding a candidate from within, whereas they could sponsor Christodoulides as an ‘independent’ given his apparent broad appeal.

“For better or worse, Disy have always operated like this. Historically, our procedures for nominating a presidential candidate typically get underway about 10 months prior to the elections, so I don’t think we’re rushing it this time, as some suggest,” he told the Cyprus Mail.

“Besides, if a hopeful wants to run, let them come before the party delegates and make their case there.”

So how does it play out? Will Christodoulides relent and submit his nomination with Disy, or buck the trend, wait it out and run as an independent a few months before the elections?

“We can’t rule anything out,” said the source. “It depends on whether Christodoulides goes for it, or decides to go quietly into the night, so to speak.”

All kinds of threatening gestures, but Russia will not invade Ukraine