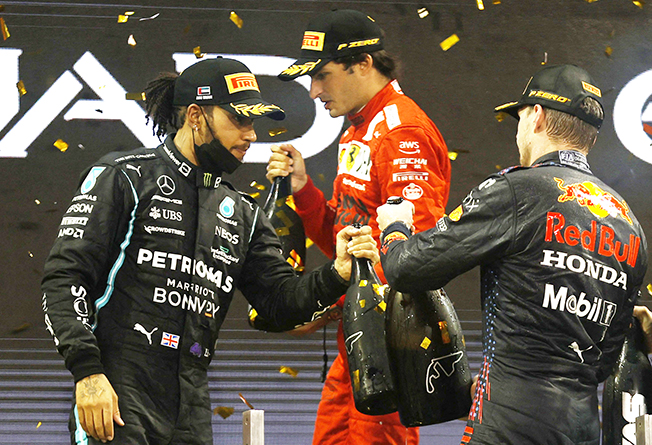 Red Bull’s Verstappen, 24, seized the title after overtaking seven-time world champion Hamilton on the last lap of the race amid uproar over how a late safety car period was conducted.

The Dutch driver collected his trophy at a gala awards ceremony in Paris on Thursday evening.
Mercedes welcomed the governing FIA’s decision, announced on Wednesday, to analyse what happened at Yas Marina and bring clarity for the future.

“We will hold the FIA accountable for this process and we hereby withdraw our appeal,” the team said.

Mercedes had announced their intention to appeal after two post-race protests were dismissed. The deadline was Thursday evening.

“We left Abu Dhabi in disbelief of what we had just witnessed. Of course, it’s part of the game to lose a race, but it’s something different when you lose faith in racing,” Mercedes said.
“Together with Lewis, we have deliberated carefully over how to respond to the events… we have always been guided by our love of this sport and we believe that every competition should be won on merit.

“In the race on Sunday many felt, us included, that the way things unfolded was not right.”
The safety car was deployed five laps from the end after Canadian Nicholas Latifi crashed his Williams, with marshals needing to be on track to recover it.

Racing resumed with one lap remaining after race director Michael Masi broke with a protocol requiring all lapped cars should overtake the safety car first.
Instead, only those between Verstappen and Hamilton unlapped themselves, giving the Red Bull driver a clear track to close on Hamilton and overtake.

Hamilton had not pitted, unlike Verstappen, when the safety car was deployed because he would have lost the lead and Mercedes calculated there was not enough time remaining to resume racing under the rules.

“We appealed in the interest of sporting fairness,” said Mercedes.
“We have since been in a constructive dialogue with the FIA and Formula One to create clarity for the future, so that all competitors know the rules under which they are racing, and how they will be enforced.

“To Max Verstappen and Red Bull Racing: we would like to express our sincere respect for your achievements this season,” the team added.
“You made this Formula One championship title fight truly epic. Max, we congratulate you and your entire team. We look forward to taking the fight to you on the track next season.”

Despite withdrawing the appeal, Mercedes team principal Toto Wolff stepped up his criticism, insisting the decisions made in Abu Dhabi had left Hamilton a “sitting duck” who was “robbed” of his eighth world title.

Wolff said: “It wasn’t just a bad call, it was a freestyle reading of the rules and it left Lewis like a sitting duck.
“The decisions that have been taken in the last four minutes of this race have robbed Lewis Hamilton of a deserved world championship.

“His driving in the last four races was faultless. He had a commanding lead on Sunday in Abu Dhabi from the get-go. He won the start and never gave the lead away again, and robbing him in the last lap of the race is unacceptable.

“But the problem with the FIA is the way it’s structured. The FIA can’t really mark their own homework, and there is a difference between being right and obtaining justice.”