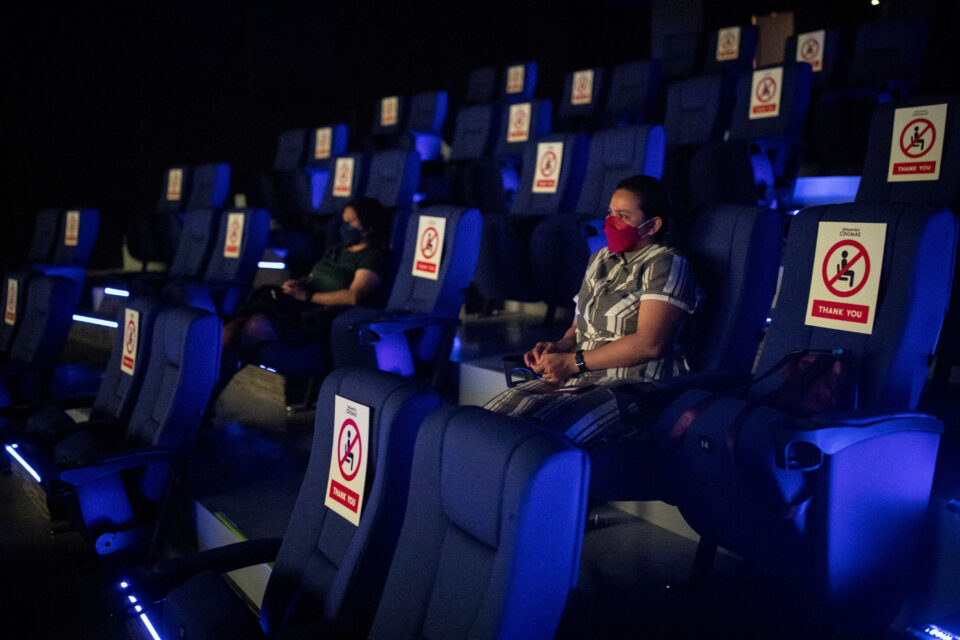 Two women watch a movie inside an almost-empty cinema, on the first day of cinemas reopening since the the coronavirus disease (COVID-19) outbreak, in a mall in Quezon City, Metro Manila, Philippines

By William James and Kylie MacLellan

British Prime Minister Boris Johnson said on Monday he would tighten coronavirus curbs to slow the spread of the Omicron variant if needed, after the Netherlands began a fourth lockdown and as other European nations consider Christmas restrictions.

Speaking after UK media reported Britain might impose new curbs after Christmas, Johnson said the situation was “extremely difficult” and hospitalisations were rising steeply in London.

“I have to say to the British public, and I say to everybody, we will not exclude the possibility of going further if we have to do things to protect the public,” Johnson said after a cabinet meeting.

Omicron infections are multiplying rapidly across Europe and the United States, doubling every two or three days in London and elsewhere and taking a heavy toll on financial markets, which fear the impact on the global economic recovery.

The variant was first detected last month in southern Africa and Hong Kong and so far been reported in at least 89 countries. The severity of illness it causes remains unclear.

Any limits on Christmas celebrations would come at a high political cost for Johnson, already under fire over reports he and his staff broke lockdown rules last year.

Asked about speculation the government would ban indoor socialising and limit tourism, Johnson said: “We’re looking at all kinds of things … we will rule nothing out.”

Dutch Prime Minister Mark Rutte announced a shutdown on Saturday, ordering the closure of all but essential stores, as well as restaurants, hairdressers, gyms, museums and other public places until at least Jan. 14.

Germany plans to limit private gatherings from Dec. 28 to a maximum of 10 people who have been vaccinated or recovered from COVID-19, according to a draft of proposed steps. The document also said access to restaurants would remain limited to people who could provide proof of vaccination or recovery.

Ireland on Friday ordered bars and restaurants to close at 8 p.m. and reduced the capacity in all public events. Italy is also considering new measures, newspapers reported on Sunday.

‘RAGING THROUGH THE WORLD’

Coronavirus cases surged in New York City and around the United States over the weekend, dashing hopes for a more normal holiday season and stretching the country’s testing infrastructure just days before Christmas.

In Washington D.C., Mayor Muriel Bowser said the city would reinstate an indoor mask mandate beginning Tuesday and running until the morning of Jan. 31. All employees, contractors and grantees of the District of Columbia government must be fully vaccinated against COVID and have a booster shot, she said.

In Geneva, World Health Organization (WHO) chief Tedros Adhanom Ghebreyesus said Omicron is spreading faster than the Delta variant and causing infections in people already vaccinated or who have recovered from COVID-19.

China, where the SARS-CoV-2 coronavirus was first detected in late 2019, must be more forthcoming with information about its origin, Tedros said. “We need to continue until we know the origins. We need to push harder because we should learn from what happened this time in order to (do) better in the future.”

WHO chief scientist Soumya Swaminathan said it was too early to conclude Omicron is milder than prior versions of the virus, adding that it could still make enough people sick to “overburden” healthcare systems.

Many monoclonal drugs “will not work with Omicron,” she said of the infused treatment used to lessen disease severity of COVID-19 patients.

Monoclonal antibody drugs deliver lab-made versions of the body’s natural antibodies to fight infection, while vaccines spur the body to make its own antibodies and build its own immunity.

Wall Street’s main indexes opened lower on Monday, dragged down by concerns about the impact of tighter COVID-19 curbs on the global economy. The Dow Jones Industrial Average was down more than 500 points, or nearly 1.5% in afternoon trading.

European stocks were down 1.33%. Shopper numbers across Britain’s high streets fell 2.6% over the Dec. 18-19 weekend versus the previous weekend, researcher Springboard said.

Last week, the European Central Bank cut its euro zone growth forecast for next year to 4.2% from 4.6% previously, citing the pandemic among “headwinds”.

ECB President Christine Lagarde said, even if economies were learning to adapt to living with COVID-19, tighter restrictions could delay the recovery.

Israel added the United States to its “no-fly” list, citing concerns over the Omicron variant. U.S. infectious disease expert Dr. Anthony Fauci said Omicron was “raging through the world” as he urged Americans to get booster shots.

Booster shots, on top of two-shot vaccinations, appear critical to fighting the variant. Moderna Inc said a booster dose of its vaccine seemed to be protective against Omicron in laboratory testing, and the current version of the shot would remain Moderna’s “first line of defence”.

The World Economic Forum on Monday postponed its annual meeting in Davos due to the spread of Omicron, putting off the event scheduled for January until mid-2022.