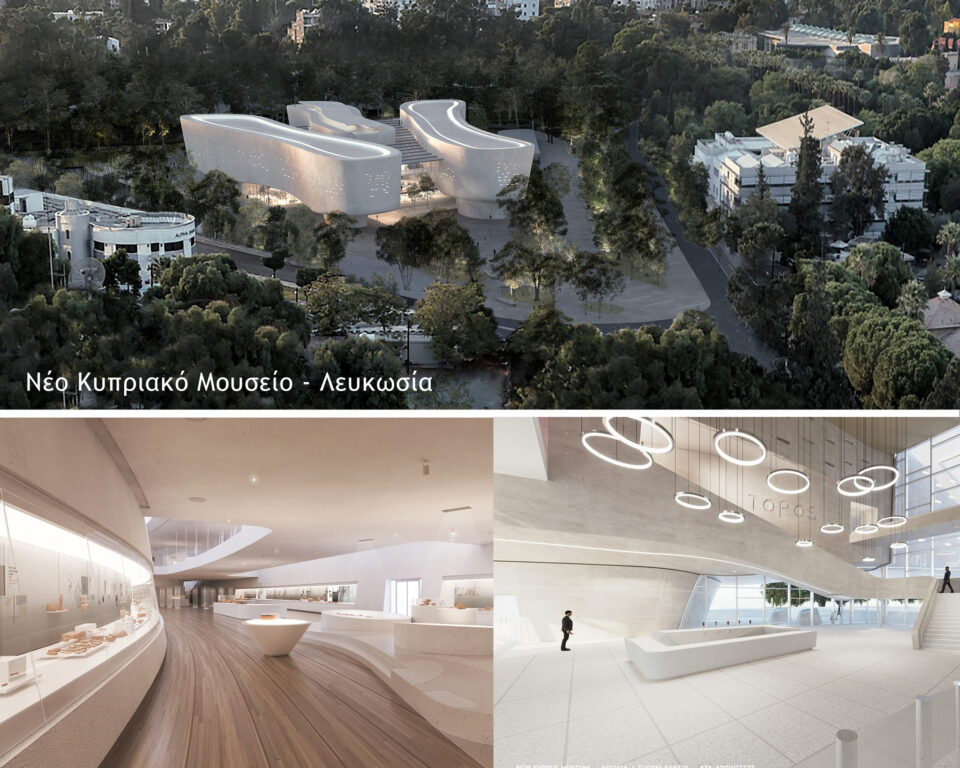 Artist's impression of the new museum

President Nicos Anastasiades on Wednesday welcomed the announcement on the €121.3m tender for the construction of the new archaeological museum, dubbed as “the biggest cultural project in the country”.

The announcement, made by Transport Minister Yiannis Karousos, is according to the president, “a step closer” to the new Cyprus Museum.

The new museum, to replace the existing one built in 1908 by the British colonial government, is to house 6,500 antiquities in permanent exhibition spaces while it will have spaces for periodical exhibitions, educational programmes, conservation workshops, a library, and an amphitheatre.

“A grand cultural project, estimated at €121 million, a reference point for architecture but also for the experience it will offer,” Anastasiades said in a statement.

The construction, he added, is expected to contribute to cultural tourism and “to protect and highlight the archaeological and historical heritage of our island.”

Τhe new, 40,000-square metre museum will be constructed across the street from the existing one, where the old Nicosia general hospital once stood, across the road from parliament and very close to the district and supreme courts.

Karousos said it was deemed necessary to rehouse the museum since, despite the alterations and additions made in the past, “this historic building is no longer able to meet the multidimensional role that a modern, national archaeological museum is expected to play.”

The tender will be open until July 1, 2022, and it is expected that the contract will be signed by the end of the same year. Construction works are to be completed within 42 months, but an additional 18 months is provided for the organisation of the museum, including the transport and installation of exhibits. The total duration for the delivery of the project, which, Karousos said is the highest in his ministry’s budget, is 60 months.

The design of the new Cyprus Museum is by Theoni Xanthi of XZA Architects, who won a competition back in 2017.

Xanthi said at the event to announce the tender that the new museum is an innovation for Nicosia, which will undoubtedly offer visitors of the museum, but also of the city, a “unique” cultural experience.

Antiquities Department Director Marina Ieronimidou said the decision to construct a new museum was “dictated by the need to highlight and preserve the Department of Antiquities’ collections through modern museological means”.

It will also constitute an evolution of the old Cyprus Museum as the aim is to have a more powerful public image and to function interactively as a meeting ground of ancient civilisations in conditions of modern life.

Nicosia mayor Constantinos Yiorkadjis welcomed moves towards the implementation of the project, pointing out that it will give a new identity to the area it will be located, in the capital’s ‘administration and culture zone’. The new facility, he said, would be “ modern and grand archaeological museum, worthy of the history and culture of our country”.

“Nicosia will be watching with anticipation but also with enthusiasm the progress of the project until its completion,” he added.

The new museum, along with other important redevelopment projects underway or recently completed such as the Eleftheria Square, the Makariou-Stasikratous streets commercial triangle and the old GSP stadium site, will further upgrade Nicosia, making it more accessible and attractive, the mayor said.

Analysis: ‘Hands off’: Why some investors are pulling meme stocks from brokerages