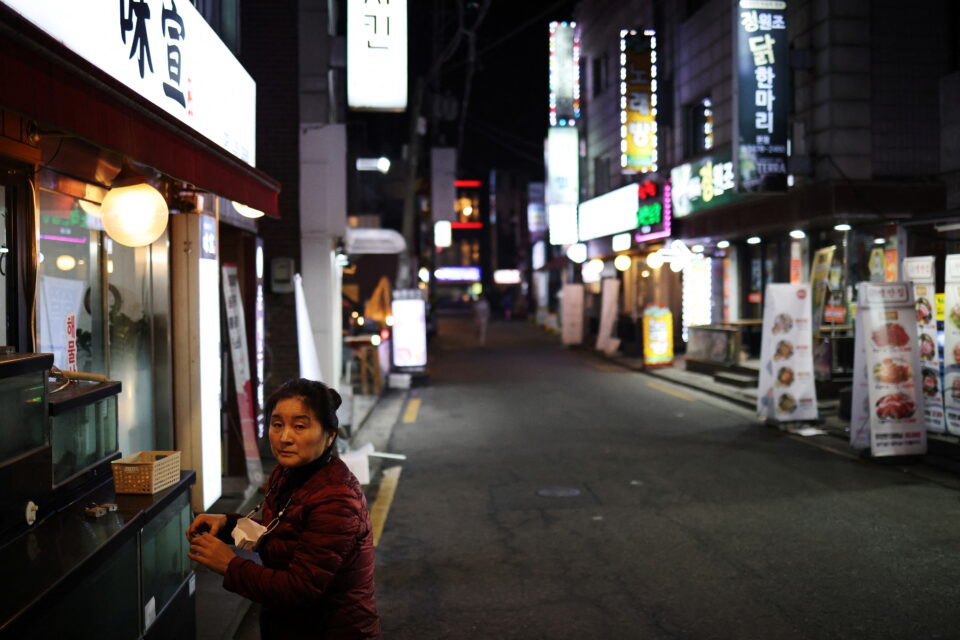 Many small businesses have complained that restrictions leave them overstaffed and overstocked, having prepared for a holiday season under looser rules.REUTERS/Kim Hong-Ji

Governments globally have tightened social mobility restrictions and made urgent pleas for citizens to vaccinate as Omicron emerges as the dominant strain of the virus, upending reopening plans that many hoped would herald the start of a post-pandemic era in 2022.

In Asia-Pacific, Singapore will freeze all new ticket sales for flights and buses under its programme for quarantine-free travel into the city-state from Dec. 23 to Jan. 20, the government said on Wednesday, citing risk from the fast-spreading Omicron.

“Our border measures will help to buy us time to study and understand the Omicron variant, and to strengthen our defences, including enhancing our healthcare capacity, and getting more people vaccinated and boosted,” Singapore’s health ministry said in a statement.

In Hong Kong, Cathay Pacific Airways Ltd said it would cancel some passenger flights in January after the Asian financial centre tightened quarantine rules due to the Omicron variant.

Elsewhere in Asia, Japan reported its first suspected case of community transmission of Omicron on Wednesday while India has urged its states to prepare for surges and allowed them to impose restrictions on crowds and large gatherings.

India’s Omicron cases have nearly doubled over the past week.

U.S. President Joe Biden on Tuesday promised half a billion free rapid COVID-19 tests and warned the quarter of American adults who are unvaccinated that their choices could spell the “difference between life and death.”

In response to the surge, countries are also looking to shorten the time between second vaccination shots and boosters. However, wary of public lockdown fatigue, there is reluctance to return to the strict curbs imposed during the spread of the Delta variant earlier this year.

Australian Prime Minister Scott Morrison on Wednesday announced new vaccination funding for clinics and pharmacies. He also urged the country’s states to reopen hundreds of vaccination hubs to accelerate a booster rollout, which were shut down when double-dose rates in adults topped 80%.

The country’s federal and state leaders held an emergency meeting of national Cabinet on Wednesday to discuss rising cases, which are severely stretching testing facilities.

Australia on Wednesday reported more than 5,000 daily infections for the first time during the pandemic, with the bulk of cases in its most populous states of New South Wales and Victoria.

Despite the Omicron surge, Morrison on Wednesday repeated strict lockdowns would not be brought back.

There was also resistance to new lockdowns in South Korea, where authorities announced restrictions on gatherings and operating times for restaurants, cafes and bars.

While polls show wide support for South Korea’s fresh curbs, some of its strictest yet, many small businesses have complained that restrictions leave them overstaffed and overstocked, having prepared for a holiday season under looser rules.

Small business and restaurant associations issued statements protesting the decision and calling for compensation, with one of the groups vowing to stage a demonstration on Wednesday.

Germany, Scotland, Portugal, Ireland, the Netherlands and South Korea are among countries that have reimposed partial or full lockdowns or other social distancing measures in recent days.

British Prime Minister Boris Johnson said he would not introduce new COVID-19 curbs in England before Christmas, but warned the government might need to act afterward.

Governments have stepped up vaccination and treatment efforts with the U.S. Food and Drug Administration set to authorise COVID-19 treatment pills from Pfizer Inc and Merck, Bloomberg News reported.

Israel will offer a fourth dose of the COVID-19 vaccine to people older than 60.

Policymakers are scrambling to address the economic hit that might come from new outbreaks with Britain announcing 1 billion pounds ($1.3 billion) of support for businesses hit hardest by Omicron.

With much still not known about the severity of Omicron infections, businesses are also worried about mass cancellations affecting big-ticket events in the new year.

North America’s National Hockey League will not send its players to compete in the men’s ice hockey tournament at the Beijing Winter Olympics due to COVID-19 concerns, ESPN reported on Tuesday.

That would not only affect league players in the U.S. and Canadian ice hockey teams, but also those in the Olympic squads of Sweden, Finland and Germany.