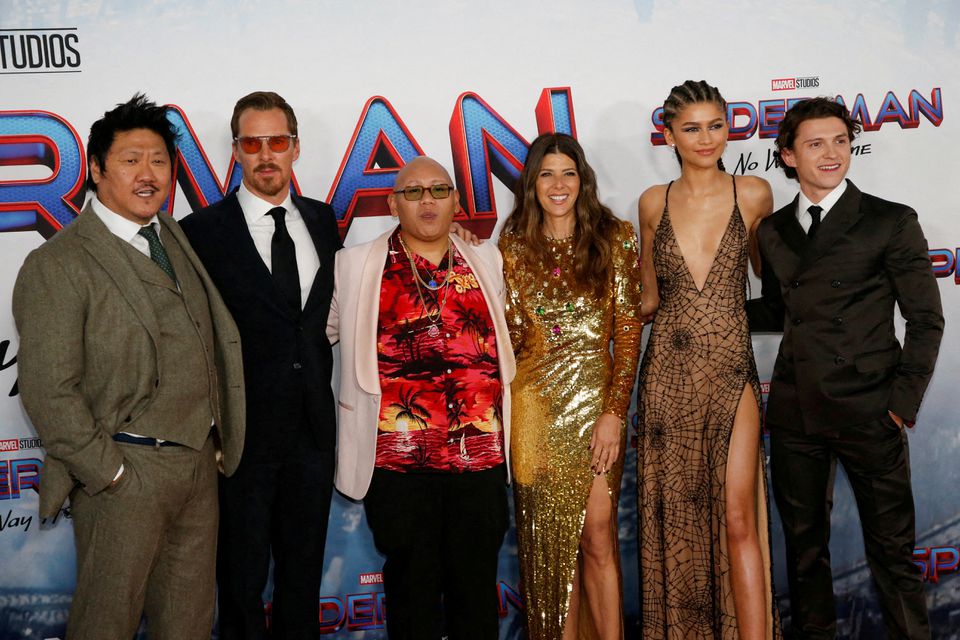 Another weekend, another chance for Sony’s superhero adventure “Spider-Man: No Way Home” to flex its box office dominance.

The comic book sequel, starring Tom Holland as Marvel’s favorite neighborhood web-slinger, towered over domestic box office charts for the third weekend in a row. “No Way Home” captured $52.7 million over the New Year’s holiday frame, boosting its domestic tally to $609 million. It extends an epic streak for the latest Spidey adventure, which continues to deliver the kind of ticket sales it would have been expected to make in pre-pandemic times.

No other blockbuster has been able to come close to reaching similar box office heights, at least in the U.S. and Canada. After “Spider-Man: No Way Home,” the next highest-grossing tentpole of COVID-19 times is Disney and Marvel’s “Shang-Chi and the Legend of the Ten Rings” with $224 million domestically. Without any real competition until Paramount’s scary sequel “Scream,” the fifth instalment in the slasher series, opens on Jan. 14, Holland’s teen vigilante will keep raking in the dough.

For non-superhero enthusiasts, or perhaps those who have already seen “Spider-Man: No Way Home” in theatres more than once, Universal and Illumination’s animated musical comedy “Sing 2” enjoyed another relatively strong weekend.

The film, which features an all-star voice cast of Matthew McConaughey, Reese Witherspoon, Scarlett Johansson and more, earned $19.6 million from 3,892 cinemas between Friday and Sunday, down a scant 12% from its debut. Since landing on the big screen in advance of Christmas, the well-reviewed “Sing 2” has generated an impressive (for pandemic times) $89.6 million. To illustrate the headwinds still facing movies that aren’t of the superhero variety, the original 2016 film “Sing” sold far more tickets, ultimately grossing $270 million stateside and $634 million worldwide.

Disney and 20th Century’s “The King’s Man,” a prequel in the extended “Kingsmen” cinematic universe, landed in third place with $4.5 million from 3,180 theatres. That’s down only 24% from inaugural weekend ticket sales, however, its box office receipts weren’t that strong to begin with. So far, the spy comedy has picked up $19.5 million at the domestic box office. Internationally, “The King’s Man” added another $14.1 million from 22 overseas markets, boosting its global total to just $47.8 million.

At No. 4, Lionsgate’s crowd-pleasing sports drama “American Underdog” earned $3.9 million from 2,813 venues, pushing its North American tally to $14.9 million. The inspirational film about Kurt Warner’s unlikely rise to become a two-time NFL champion has been embraced by audiences (at least, those who went to see the film), with an “A+” CinemaScore. Unfortunately, high marks from moviegoers isn’t translating into the kind of word-of-mouth needed to sell tickets.

“The Matrix Resurrections” fell to fifth place, scraping together $3.5 million from 3,552 locations over the weekend while playing on HBO Max. That’s a 67% decline from its opening, by far the biggest dip in the top 15 on domestic box office charts.

The fourth “Matrix” movie, once again starring Keanu Reeves as the sleek cybercriminal Neo and Carrie-Anne Moss as Trinity, is the last Warner Bros. movie (for now) to premiere on HBO Max on the same day as its theatrical debut. The studio’s strategy to put its entire 2021 slate concurrently on streaming may have boosted awareness around HBO Max, which had a lacklustre launch in 2020, but it massively curbed ticket sales for every movie that was released on the big screen.

Other notable releases in the top 10 include Disney’s “West Side Story,” which pocketed $2.1 million from 2,690 venues. In total, director Steven Spielberg’s remake of the classic musical has made only $29.6 million in North America and $47 million worldwide, a disastrous result considering the acclaimed movie cost $100 million to produce.

Bicommunal group’s work on Salamis a ‘most important initiative’