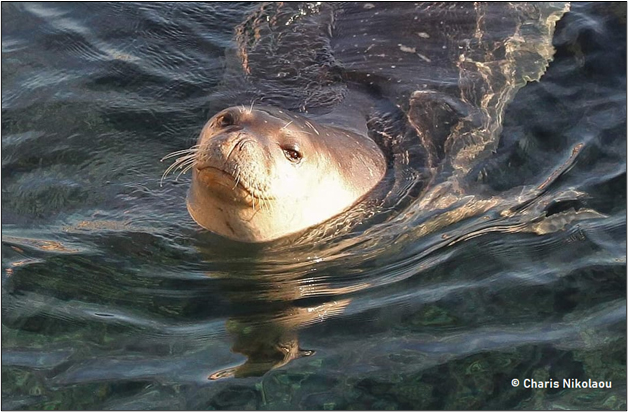 In the light of positive signs, the species has been recently recategorised from Critically Endangered to Endangered on the IUCN Red List global assessment due to the increase in population size over the last few years. The global species population is estimated to be less than 700 individuals of which approximately 350-450 are mature individuals. Today, the distribution of the Mediterranean monk seal in the Mediterranean Sea has been recorded from the islands of the Ionian and Aegean seas, towards Cyprus and southwestern Turkey. There also have been some sporadic sightings of individual monk seals in Syria, Lebanon, Israel, Egypt, Libya, Spain, Italy, Croatia, Albania and along the Israeli coasts.

The species was first officially reported in Cyprus in 1959 and since then, its population declined. A study in 1997 and in 2005-2006 identified suitable habitats for the species in Cyprus, but did not record any reproductive activity. A more recent study conducted between 2009 and 2018, showed a very promising future for the species on the island.

Since 2009 the number of sightings of the Mediterranean monk seal have increased, with most of them (95 per cent) being juveniles and adults and only 5 per cent being newborn pups. The study identified 17 suitable monk seal shelters covering a total of 370 km of a coastline. Until 2009, it was believed that the species was close to extinction in Cyprus. But the increased recent sightings of pups, juveniles and adults over the last years and the availability of suitable of habitats on the island, suggest that there is a permanent population of the Mediterranean monk seal in Cyprus.

Even though the Mediterranean monk seal spends most of its time in the marine environment, the use of land and especially inaccessible remote sea caves are crucial habitats of their life cycle (resting, pup bearing and nourishment). However, this was not always the case. In the ancient times and up until the 20th century, the Mediterranean monk seal was known for inhabiting open sandy beaches and rocky shorelines for such activities. It is believed among scientists that this is a recent behavioural adjustment of the species in response to the human pressures on land, including coastal urbanisation, tourism, hunting and increased human population. Sea caves are considered the most crucial habitats for the monk seal life cycle, and it is of outmost importance that these habitats are effectively managed and protected.

The main threats for the species are habitat deterioration and loss due to coastal development and tourism, decreased food availability due to overfishing and accidental entanglement in fishing gears that could lead to death by drowning and deliberate killing by fishermen. However, it is important to mention that the last two threats do not apply in Cyprus, as no such incidents were recorded to date. There is historical evidence that the species was once very abundant in the past in the Mediterranean sea, but the population was severely depleted due to human exploitation especially during the Roman era. 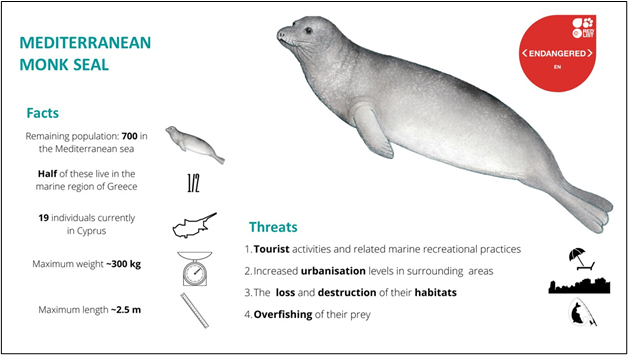 The Mediterranean monk seal is legally protected through numerous national laws and regional and international treaties, as well as European Union regulations. In addition to the policies and limitations imposed on fishing practises, various national, regional and EU legislations have been put in place to protect the species. The species has been protected in Cyprus since 1971 under the Fisheries Law (CAP 135) and regulations (No. 273/90) and has since been also included in the Annex II protocol which concerns Specially Protected Areas and Biological Diversity (SPA Protocol). Cyprus ratified this with the law No.20 (III)/2001. With the marine and terrestrial habitat for the Mediterranean monk seal being highly specific, the designation of Special Areas of Conservation (SACs) has been deemed necessary for their conservation. This has been partly the reason for their categorisation as a priority species in the European Habitats Directive (92/43/EEC), which was later translated into national legislation under the Law for the Protection and Management of Nature and Wildlife (153(I)/2003). It is under the above law that the Natura 2000 Network was set up in Cyprus.

For many years the Department of Fisheries and Marine Research of Cyprus has conducted research and field surveys with the aim to monitor the population of the monk seal and protect the species and its habitats, against the known threats.

In 2019, a new project started which aimed to improve the knowledge of the population of the Mediterranean monk seal in the eastern Mediterranean, monitoring their populations, contributing to the identification of critical habitat and creating conservation actions that would mitigate the negative interactions between fishermen and the species’ individuals, including incidental capture and predation on catch from fishing nets.

The project was coordinated by the International Union for Conservation of Nature – IUCN and partners from Greece, Cyprus and Turkey  participated in the project. Three NGOs were partnering from Cyprus, Enalia Physis Environmental Research Centre, Society for the Protection of Turtles (SPOT) and Cyprus Wildlife Society. The efforts for the conservation of the species still continues with a new project named “Monk seal protection at the eastern Mediterranean” coordinated by IUCN and implemented by partners from Greece, Cyprus and Turkey. Within this new project, the main activities in Cyprus include clean-ups of monk seal caves and public awareness activities and campaigns.

Interactions between fishing and marine mammals have been reported throughout the world often causing some serious adverse effects on the conservation of certain species. These interactions are mostly caused due to depredation of the catch (the practice of taking the catch that is caught on fishing gear) by marine mammals, often causing these animals to unintentionally get caught on fishing gears.

Depredation can reduce the market value of the catch, significantly increases the operating costs, while also increases the chances of entanglement and subsequent deaths of caught individuals. Such interactions pushed the Yangtze River dolphin (Lipotes vexillifer) to extinction and currently the vaquita (Phocoena sinus) faces the same fate if no immediate conservation measures are taken.

Accidental entanglement of the Mediterranean monk seal on fishing gear has been reported in Greek fisheries which has been identified as the main cause of mortality. The bycatch of the Mediterranean monk seal affects mainly inexperienced young individuals. Such events have been reported to cause deliberate killing by fishermen due to the damage caused to fishing gear and catch.

The findings of the project “Monk seal conservation in the Eastern Mediterranean” in Cyprus showed that the interactions between fisheries and the monk seal are minimal and no incidental capture of the species was recorded. Even though depredation on the catch by the monk seal was reported by fishermen in Cyprus, it is also important to mention that no aggressive behaviour was observed by those who participated in the study. Rather, a more compassionate behaviour was observed and an interest for the conservation of the species. The findings of the project confirmed that fishing is not a direct threat to the species in Cyprus, at least for now, where the monk seal population remains at low levels and the focus of fishermen is mostly centred on other species. 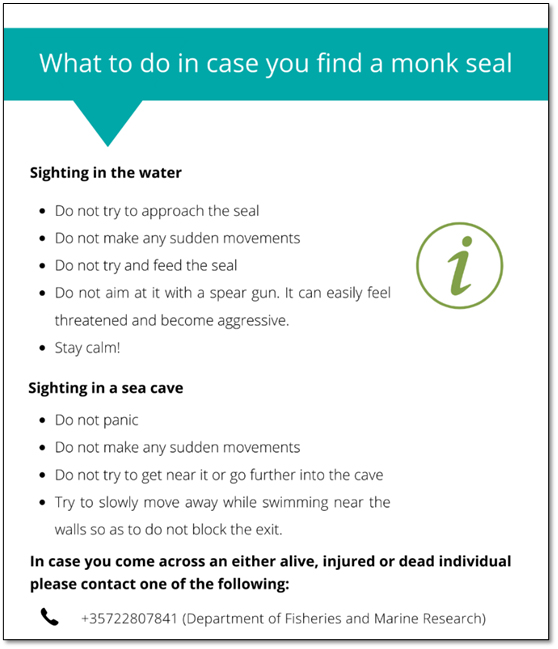 In the case of a monk seal encounter, it is important not to interact with the animal in any way and immediately report the incident to the Department of Fisheries and Marine Research.

It is clear that the most important threats that the monk seal is currently facing in Cyprus is coastal development and tourism. To minimise the anthropogenic stressors that the species is currently facing, the public is encouraged to not interact with the animal. Considering the critical status of the species, the many threats that is currently facing and the very limited population in Cyprus of approximately 19 individuals, it is crucial that research projects and conservation efforts continue, with the aim to protect the species and improve its conservational status. Concluding with a note of optimism, in late 2021, two pups were born in the area of Ayia Napa, increasing the population to 21 individuals.