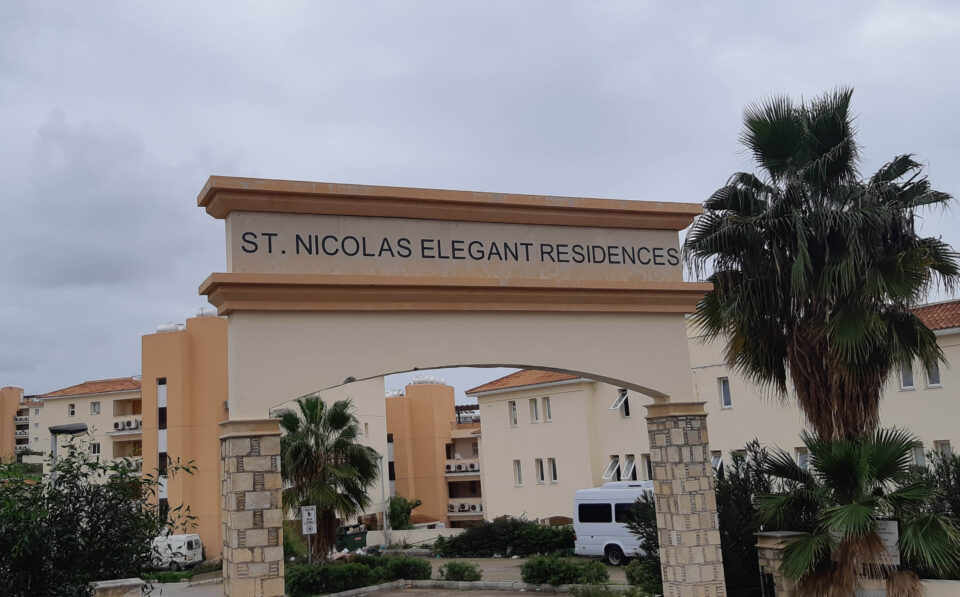 The Chlorakas complex, part of which has no water supply

Chlorakas community leader Nicholas Liasides on Wednesday accused the company managing the St Nicolas Elegant Residence of “limitless audacity” after it announced it would be taking legal measures against the Water Development Department.

The spiralling spat comes a day after the department issued a statement detailing why it could not reconnect part of the complex’s water supply, following a protest held outside its Paphos offices by the 600 third-country nationals who live in that section, asking that water supply be reconnected.

According to the department and the residents, the water was cut in 2018 after financial disputes between the manager of the apartment complex and the Chlorakas community council. Other parts of the complex are not affected.

The department’s statement added that the local authority is responsible for the water supply at the apartment building, but explained that Chlorakas community council cut off the water supply several years ago due to the owner’s large financial debts from water purchases and initiated legal proceedings against him.

Since then, the water needs of one section of the complex have been met by the owner company, “in violation of the terms of the building permit and the law in general as it is not an authorised water supplier,” the department said.

On Wednesday the company issued a response, saying that as the Water Development Department manages all water in Cyprus, it has an obligation to ensure that enough water safe for human consumption is provided for distribution, both to authorised water suppliers and to approved consumers.

Citing article 19 of the integrated water management law, the residents had appealed to the department to temporarily provide them with water pending a court decision on the matter.

But the department said that even though the law stipulates the director, in exceptional cases, can supply water for human consumption directly to approved consumers, these conditions do not apply in this case and the authority does not have infrastructure near the complex.

Addressing this, the company said that the department “never explained why 600 people have been left without water” when the matter is financial.

“Has the department cut the water of other communities that owe it money?” the statement asked. “Will anyone in Cyprus, or the rest of the world, believe that the sole water provider is having trouble giving water to Syrian refugees?”

It also added that authorities, especially those managing public resources, have an obligation to ensure the human rights of all people living in the country.

The company ended the statement by saying it has repaid its debts to the community council, therefore the fact it has not reconnected the water is “inexcusable” and have more to do with the prosecution of asylum seekers.

Finally it said it would be taking legal action against the water development department for its “misleading statement”.

Later in the day, Liasides issued a response, saying the company’s statement was a display of “limitless audacity”.

“The company is pretending to be a protector of human rights, while clearly abusing and endangering the residents,” he said, by allowing them to move into a cramped building with unsafe water, “stacking them in corridors and hotel halls for profit”.

Liasides added that neither he nor the state and its services should accept the threats in the company’s statement, asking that the attorney-general, MPs and party leaders intervene “to settle this once and for all”.