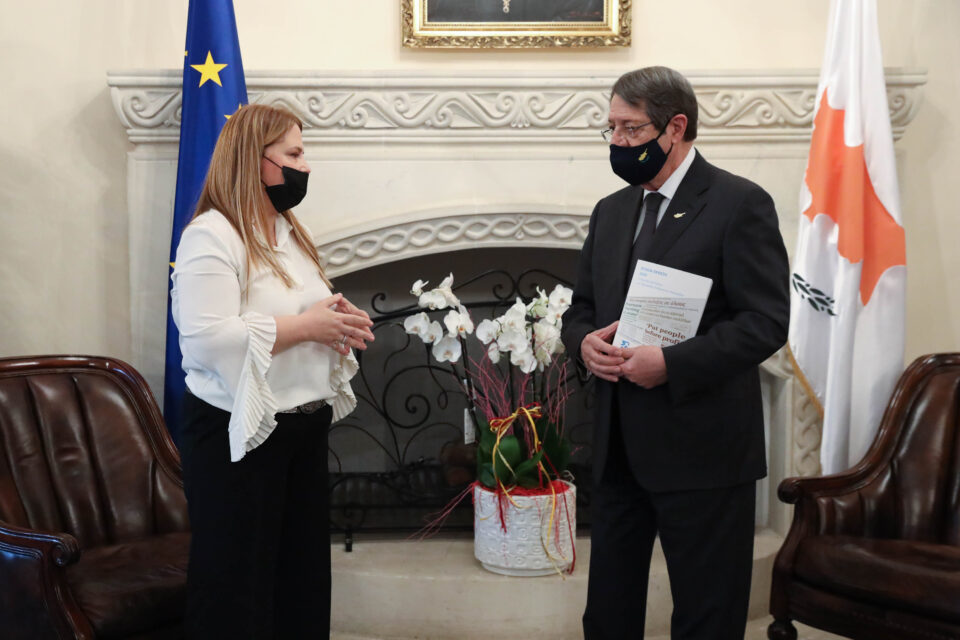 President Nicos Anastasiades on Thursday applauded ombudswoman Maria Stylianou-Lottides on her office’s work after receiving her annual report for 2020.

Stylianou-Lottides submitted a report for 2020 as well as individual reports detailing her office’s multifaceted work and role in its 30 years in existence, which it celebrated in 2021.

The ombudswoman said that the pandemic was undoubtedly at the centre of the 2020 report, as it tested the endurance of states and their people in the context of limiting their human rights.

“As was our duty, we stood by every citizen to stop any possible violations that went beyond the intended purposes, proportional to the necessity of measures”.

Beyond that, the ombudswoman emphasised the enduring role of ombudsman/woman in standing by the public, pointing out any maladministration and seeking to eliminate every injustice.

The ombudswoman spoke about her office’s work in 2020, pointing out some highlights like its involvement in the relocation of the Dali asphalt plants, “and our continuing role in helping get state aid to every vulnerable group of our population such as migrants, asylum seekers, people with disabilities, and people in need of state support, so they can continue living in dignity”.

Apart from the annual report, Stylianou-Lottides submitted a number of special reports on her office’s involvement in the implementation of several policies and mechanisms.

One report detailed work done with regards to Covid–19 and the implementation of the Forced Returns Monitoring Mechanism, wherein the ombudswoman’s office monitors the return of irregular third-country migrants to their countries of origin or host countries to make sure their human rights are not violated “from the moment of their deportation to when they board the plane”.

Other reports focused on the Independent Mechanism for the Promotion, Protection and Monitoring of the UN Convention on the Rights of People with Disabilities, and the National Mechanism for the Prevention of Torture, which involves visits to places where people are confined, from prisons and holding cells to mental hospitals and nursing homes.

This included a ‘know-your-rights’ guide for prisoners and new arrivals at prisons.

“With the completion of 30 years since its establishment, the need for the institution [of ombudsman/woman] is being rewarded through a variety of actions related to the protection of human rights which you detail in your reports,” the president said.

He congratulated the ombudswoman, saying that her interventions are important and satisfactory to the state, as they ensure rules and regulations are followed by everyone, including the government.

“In this way, you have contributed greatly to correcting distortions [of justice] and erroneous administrative decisions of ministries or the cabinet itself,” Anastasiades said, applauding the ombudswoman’s decisiveness when intervening.