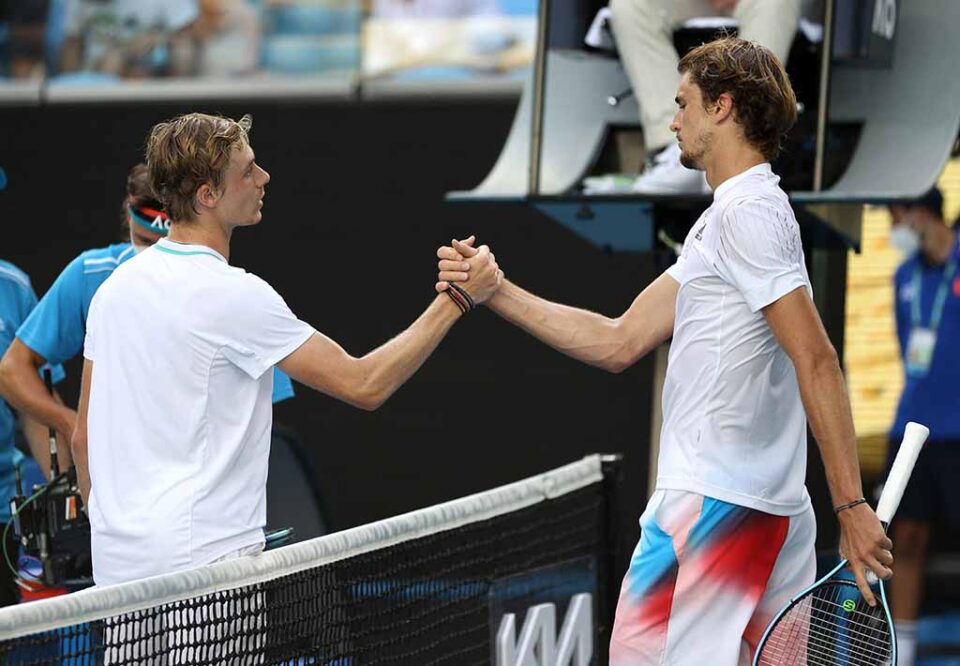 Denis Shapovalov upset an out-of-sorts Alexander Zverev 6-3 7-6(5) 6-3 in broiling heat on Sunday to reach his first Australian Open quarter-final and set up a showdown with fellow lefthander Rafa Nadal.

The pugnacious Canadian was magnificent against the German third seed, earning one of his biggest career wins at Margaret Court Arena.

For all Shapovalov’s talent and the predictions of Grand Slam success that have followed him, beating the very best has been a challenge.

Zverev was only the second top-five player he has beaten, with the first Nadal, four years ago in Montreal.

Now the 22-year-old will bid to end the Spanish great’s bid for a record 21st Grand Slam title.

“I’m definitely expecting a long battle out there,” Shapovalov said of facing Nadal.

“Obviously, he makes you play a lot. His defence is very good. He’s very good at what he does.”

Shapovalov will be primed for a marathon, having survived a five-set slog against South Korean Kwon Soon-woo in the second round and two four-setters besides.

That all came after he tested positive for COVID-19 after arriving in Sydney around Christmas and had to isolate.

“For sure, I’m just pleased overall with my game so far and my fighting spirit,” he said.

Shapovalov expected more of a battle against a listless Zverev, who was on the back foot throughout against the Canadian’s all-out attack.

After sleep-walking through the first set and going down a break in the second, Zverev rallied to take Shapovalov into a tiebreak but promptly fell apart.

Conceding an early break in the third set, the German bowed out meekly and was scathing of his own performance.

“Everything,” he said, when asked what went wrong.

“Today was just, in my opinion, awful from my side.”

A Grand Slam finalist with burning ambition, Zverev could have taken the world number one ranking off Novak Djokovic by claiming the title at Melbourne Park.

In late 2021, Zverev said he saw himself, Russian Daniil Medvedev and the deported Djokovic forming their own “Big Three” in 2022 — without Nadal and Roger Federer.

Instead, the 24-year-old was left ruing a chance gone begging.

“I came here with a goal to win, and maybe to become number one and all that. But if I play like that, I don’t deserve it.”