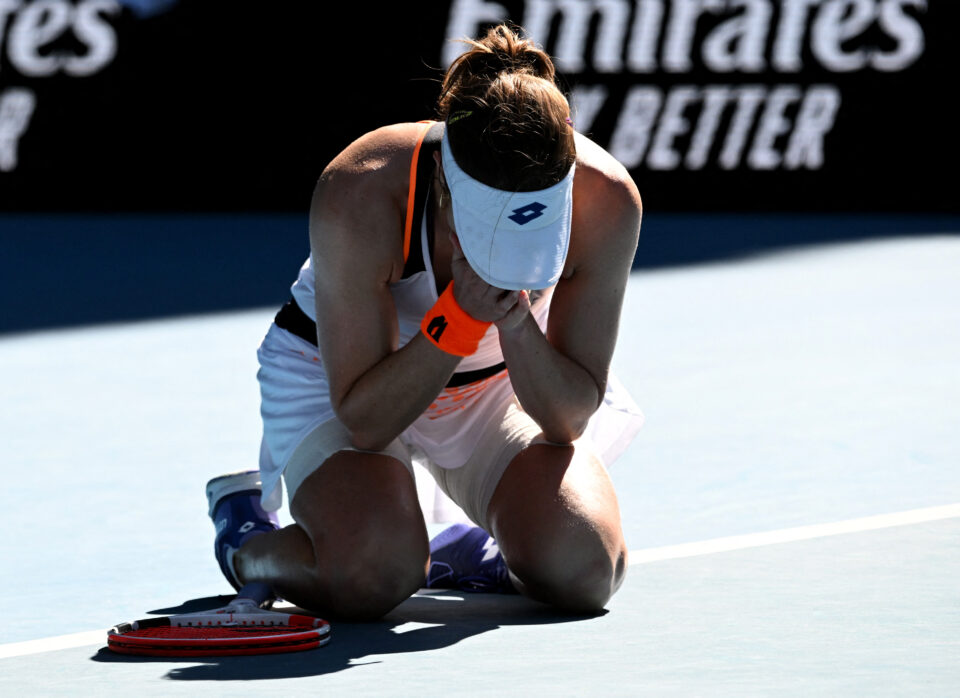 Highlights of the eighth day of the Australian Open at Melbourne Park on Monday, times local (GMT +11):

0004 TSITSIPAS HOLDS ON AGAINST FRITZ

Fourth seed Stefanos Tsitsipas came back from a set down on two occasions to claim a 4-6 6-4 4-6 6-3 6-4 win over American Taylor Fritz and book his place in the quarter-finals, where he will play Jannik Sinner.

“I gave everything out there tonight. I’m very proud of myself for the way I fought,” Tsitsipas said.

Kaia Kanepi fought back from a set down to claim a shock 5-7 6-2 7-6(10) win over world number two Aryna Sabalenka. The Estonian will be looking to win her first Grand Slam quarter-final match at the seventh time of asking when she plays Iga Swiatek next.

Poland’s Iga Swiatek came back from a set down to beat Romanian Sorana Cirstea 5-7 6-3 6-3 in a tight contest on Margaret Court Arena to reach the quarter-finals at Melbourne Park for the first time.

“For me, a week without crying is not a week. I cry when I lose, I cry when I win,” said Swiatek after sealing her place in the last eight.

Auger-Aliassime, 21, joins compatriot Denis Shapovalov in the last eight, marking the first occasion that multiple Canadian men have reached the quarter-finals at a Grand Slam.

Unseeded Alize Cornet, making her 63rd main draw appearance at a Grand Slam, reached the quarter-finals for the first time with a 6-4 3-6 6-4 win over 2018 Australian Open runner-up Simona Halep in a gruelling contest on Rod Laver Arena.

Thai Tamarine Tanasugarn had held the previous record for the most appearances before reaching the last eight at a major, achieving the feat on her 45th at Wimbledon in 2008.

1405 COLLINS FIGHTS BACK TO DOWN MERTENS

Danielle Collins rallied from a set down to beat 19th seed Elise Mertens 4-6 6-4 6-4 and become the third American woman to reach the last eight, joining Jessica Pegula and Madison Keys.

Collins secured the win on her third matchpoint when a tired Mertens double faulted.

Play got underway as scheduled on day eight of the championships. Danielle Collins and Elise Mertens were first up on Rod Laver Arena for their fourth-round tie.

Another warm day at Melbourne Park was in prospect with temperatures already approaching 30 degrees Celsius (86 degrees Fahrenheit) and forecast to hit a high of 34.