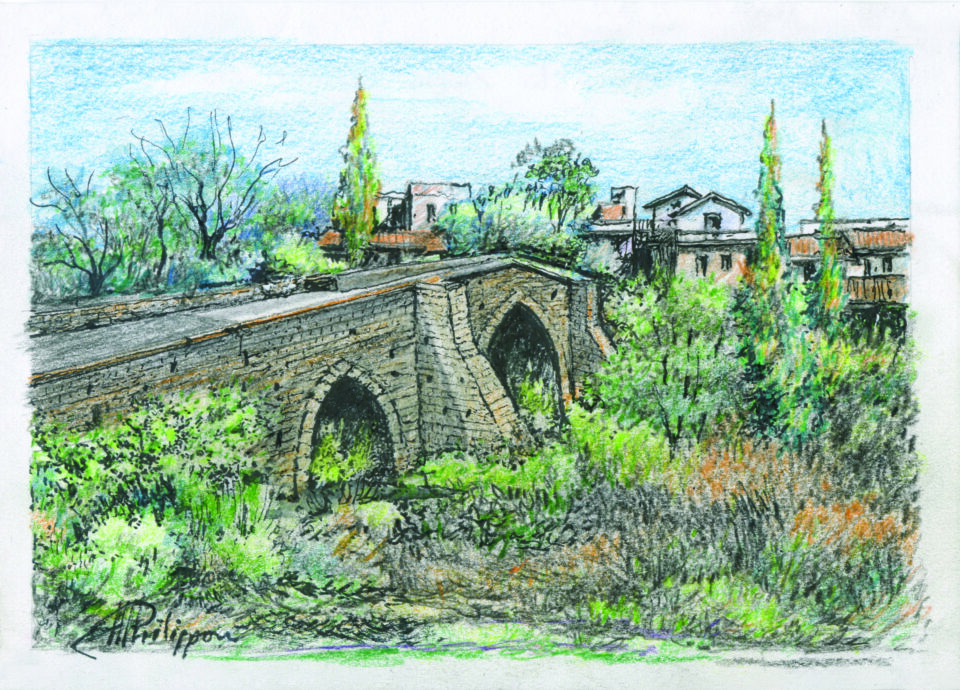 In a new book detailing the precious elements of a fading culture an architect brings the island’s past back to life. ALIX NORMAN meets him

In 1961 the French Ministry of Foreign Affairs conducted a study into Cyprus’ tourism and development prospects. A technical delegation from the University of Geneva was sent to the island, with experts identifying and researching every area of interest. And a comprehensive strategy for sustainable tourist development over the coming decades was suggested… 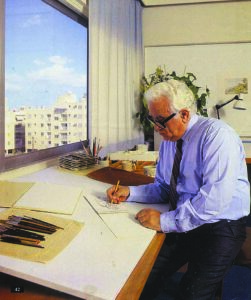 The study was never implemented. Instead, development took a very different course. And, according to renowned architect and author Andreas Philippou, what we saw was “the emergence of irrelevant and disjointed tourist resorts, which went on to alter the image and essence of the Cyprus landscape in places of exceptional natural beauty as well as on sites of potential environmental and archaeological interest.”

In short, we’ve experienced “the pillaging of the Cyprus landscape. We have disregarded our history and culture,” Andreas suggests, “importing to the island all kinds of anarchic, foreign-inspired developments and the subversive flair of the so-called pseudo-modernism which, instead of contributing to cultural distinctiveness and cultural heritage of our people, can only bear bad fruit.”

This rape of an island is the subject of Andreas’ new book, The Abandonment and Decay of the Cyprus Landscape, which follows on from the architect’s two previous acclaimed works. And in it, he focuses on preserving – in glorious illustration – the island’s past: the culture, heritage and history that are reflected in the now crumbling constructions of old.

“I have set out to trace and record distinctive examples of our country’s world of old, the precious elements of an era,” he explains, “in the hope that they might inspire the scientific and systematic recording, preservation, and rescue of these unique treasures… Or what is left of them. Through these drawings and images, I have put to paper the last flashes of images of previous years before they fade away and perish forever. After all, folk tradition, in my eyes, has not been impaired by time.”

Andreas has long been a lover of nature; in particular the landscapes of his homeland. “Ever since I was a boy I have admired and loved the Cyprus countryside, fascinated by the alternating seasons, and the way each change was imprinted on nature by way of sounds, scents and colours. Those wonderful colours merging, the green with the sky blue, the brown with golden hues, the orange with the yellow; I have always been enchanted by them, enticed to spend several hours in the countryside, admiring the dramatic contrasts produced by the weather in the course of time.”

So moved was Andreas by the landscape, even as a boy, that he has always been “driven to capture on paper its incomparable grace. It is often said that a picture is worth a thousand words. But in the past, in the years of my youth, the art of photography had not yet developed enough to provide an option for artistic expression: drawing became the only medium of expression I possessed, as I set out to bring to light the beautiful, genuine and true Cypriot landscape.” 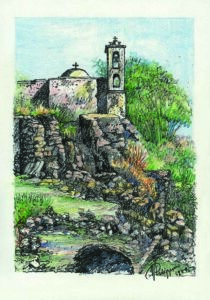 For over half a century, Andreas has carried colours and sketchbook on his island travels: recording countless landscapes, buildings and features now lost to time. As a project supervisor, he often enjoyed the chance to journey outside the city, and “stealing time to create several sketches, tracing the most significant styles of Byzantine architecture; the fruits of this creative and aesthetic pursuit are my two previous publications Byzantine Architecture in the Troodos Mountains, and The Byzantine Architecture of Cyprus.”

But in Abandonment, his artworks are less a tribute to a specific era, and more “an homage to a romantic past that only vaguely coexists with the present: the traditional and popular elements and the impromptu, unpretentious architecture of our villages that are gradually lost in time due to rapid development, abandonment and drastic change in the way of life.”

Across 450 fascinating pages, we find delightfully detailed depictions of Cyprus’ cultural elements and landscapes: watermills, dry-stone walls, intricate gates, and once stately bridges that tell of a long-lost way of life. These are the characteristic elements of folk tradition, Andreas reveals. “The simple, austere structures that responded to the living needs of the people; the work of inventive native artisans that to this day reflect our history, but have almost disappeared today or exist only in the form of ruins and scattered stones resulting from abandonment.

“These structures are tokens of the daily life of that particular time; they are tokens of the cultural heritage passed down to us by the previous generations and, as such, they are utterly harmonised with the natural landscape and the environment. They provide irrefutable evidence and sustain memory because they are interwoven with the folk tradition and the ways of the islanders.”

It is a way, he suggests, that – if not already forgotten – is fast disappearing, indicative of “a culture that is gradually losing its former splendour, fading under the frantic contemporary way of life and of unruly development.” And yet, despite its title, Abandonment is a positive book: a tribute to Andreas’ forebears, the architects whose work harmonised with a uniquely beautiful island; craftsmen and women who loved the landscape.

“This current edition pays a well-merited tribute to the traditional craftsmen of the countryside who combined their knowledge and unadulterated wisdom with honest hands and a sharp brain, and used materials drawn from nature in order to build what they would eventually bequeath to us,” he concludes. While their work may be crumbling, their lives forgotten, here, in these 450 pages, they are celebrated and remembered.

How different Cyprus might have been had the original French study been implemented is anyone’s guess. Perhaps our natural landscapes, clever artisans and traditional culture would have been widely celebrated – and consequently preserved in all their glory for future generations. Instead, we live on an island characterised in Andreas’ eyes by “irrelevant and disjointed tourist resorts.” A place in which many of our past treasures are now merely “a piece of memory resting within me, brimming with the events of the time…”

Published by En Tipis Publications, and available from all good bookshops on the island at a cost of €60. For more information, email [email protected]