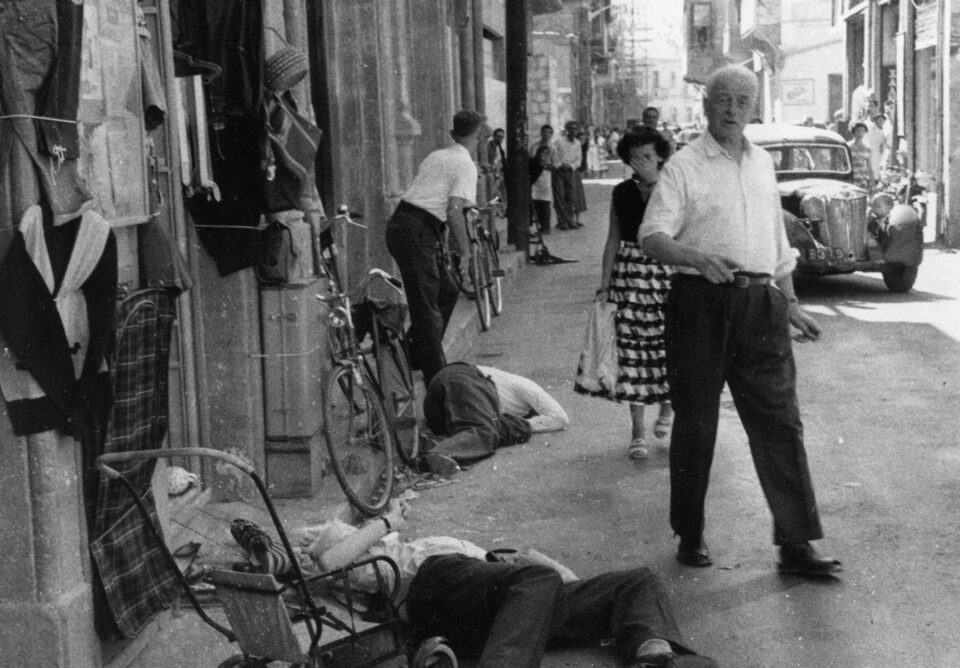 I suppose it was always inevitable but somehow it never seemed likely really to happen. For this is farewell. Time has, at last caught up.

My words first appeared in the paper as caption to a photographic competition back in about 1956. I was living in Famagusta at the time, was recently married and had already welcomed my little daughter, Sue, who had been born in BMH, Nicosia. I was Senior Medical Officer in Karaolos Camp out on the Salamis Road. Over the next year or two I got to know Jack [Jacko] Jacovides who had founded the paper less than a decade earlier. The chap who ran most things at that time was Vic Bodker. Out of interest he and I unwittingly appeared together in that famous photograph of the two Brits who had just been shot down outside a photographic shop in Nicosia. Neither of us actually knew that the other was there at the moment, until we saw the proofs a day or two later. In fact much data circulated later about the incident was deliberately inaccurate. The chap in civvies just emerging, gun in hand, from the shop, is not as reported, but is none other than myself. The accurate data was deliberately withheld as, even then, I was regarded as a public risk. Rien ne change?

I left Cyprus in 1960 and went into medical practice in the Kentish village of Sandwich, which really did, and does still, exist, and where my UK home has been ever since. I retained a connection with the island and we bought a small piece of land not far from the old military camp, in a development project of what was to be called Salamis Garden City. The invasion, in 1974, put an end to that dream and we were never able to take possession although we had all the necessary evidence. Efficiency and fair-play were never strong points in the workings of the breakaway state.

During my times in Cyprus I’ve been lucky enough to call John and Mary Harding (the last Governor) and several subsequent presidents, on both sides of the divide, on first name terms, Fazil, Rauf, Glafcos, George, Spyros. Also UN Secretaries-General, Perez, Kofi, Kurt and Boutros. That is part of the explanation for my seemingly prophetic remarks.

During this opportunity of writing for the paper I have been able to bring up a number of my personal likes, dislikes and wishes. In a mixture of constructive lethargy and creative lassitude these having included a loathing for organised religions and prayer mongers. I often think that as soon as the Big-Cheese-Up-There hears prayers starting up from somewhere his main thought is,.. ‘Oh No,.. What Now?’

I also disdain all forms of wanton violence, untrustworthy authorities, bad English and socialism. The very idea of any infringement of our hard-won freedoms, especially of free speech, makes me grate my teeth.

I’ve harped on about ‘good’ English, about moral indignation, which is only jealousy wearing a halo. Also one of my hates, that endlessly re-introduced epidemic they call ‘fashion.’

I love my occasional tipple, especially Keo and Ploumari ouzo, but I abominate the way in which everything today has to be helped on its way with too high an alcoholic intake. All booze, in whatever quantity, affects brain function. For example, it has no place in serious meetings, prior to any action requiring a clear head and skilled hands. A working brain is the one thing that raises humans above the rest of the animal world.

I have nagged endlessly about any of these eternally important matters. And, shame upon me, I have seldom had anything nice to say about the words of politicians, or any others who ‘work’ only with their mouths.

Who knows, your esteemed editor may grant me an occasional ad hoc contribution when I can no longer contain or even suppress my tolerance and impatience at the antics of my fellow H. sapiens.

In my journalistic time I have written for almost 1,000 publications. Many of them still exist notwithstanding. But somewhere down in the glowing and happy embers there has always burned a love for and an appreciation of this lovely little island. It entered my life through a side-door and when I wasn’t really looking. And it has stayed there as a warm glow through the intervening years.

I hope to come back one day, maybe to pick up the proverbial pen again.

Until then I send greetings to all, readers and citizens alike. I’ve enjoyed it all immensely and, my word, it really has been a helluva ride.

So now, in the poignant words of Catullus, it’s Ave Atque Vale, Hail and Farewell.

Cold night Wednesday to give way to greater sunshine Thursday