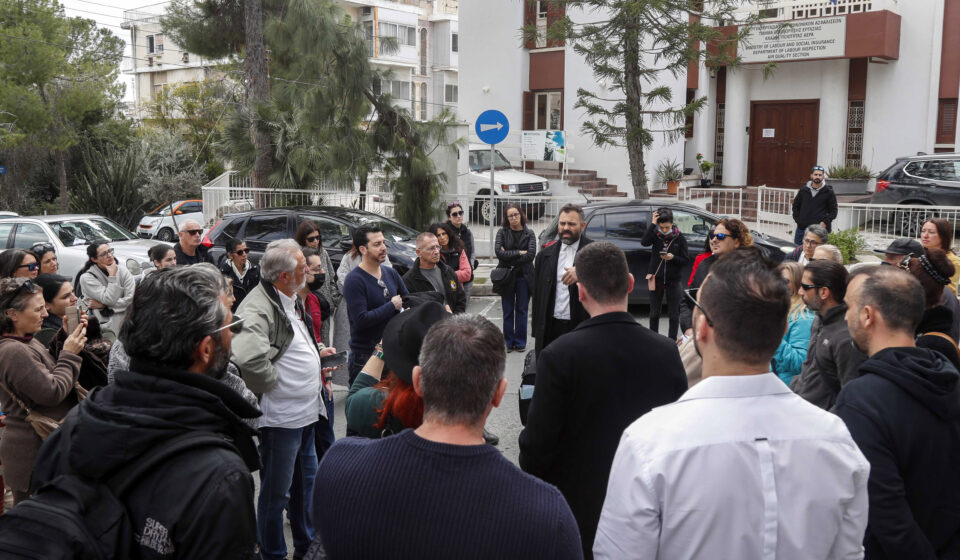 AlarmCall members outside the attorney-general's office on Monday (CNA)

A group of doctors, lawyers, educators and scientists gathered outside the attorney-general’s office on Monday to demand explanations regarding what they described as “scandalous” management of Covid-19.

Professionals from the AlarmCall.org network staged the protest over the state’s inadequate handling of the pandemic, citing specific decisions that, in their professional opinion, brought instead negative consequences.

The archbishop’s decision to put 12 priests who refused to get vaccinated on mandatory leave had “no medical or scientific basis” said epidemiologist Epidoforos Soteriades.

The doctor was charged with illegal assembly, conspiracy to commit a misdemeanor, and violating the quarantine law after participating in a protest against vaccinations and government SafePass measures last year.

Gynaecologist-obstetrician and theologian Dr Adri Polydorou who also spoke of “poor management of the crisis” called on the archbishop to resign and has helped start an online petition.

Another doctor, general practitioner Anthousa Nicolaidou said the pandemic was based on “three lies”; the asymptomatic, the validity of tests and the virus’ mortality rates.

The measures taken during the pandemic have brought about social and family division, economic impoverishment of many people, psychological devastation and intimidation, especially of children, she said.

For his part, neurosurgeon Michalis Spyrou said, among other things, the vaccination of children is not justified “since it is proven that children if they get sick are not at risk”.

He called on the health ministry, the epidemiological team, the scientific community and the medical association to end the vaccination of children “as the benefit in relation to the possible risks from the side effects of vaccines does not justify vaccinating them with preparations that have already shown complications, myocarditis, pericarditis and other problems”.

Safety measures at schools were also criticised, against the backdrop of protests by both teachers and parents.

The use of face mask “reduces blood oxygen by 2-3 per cent and increases pulse rate by 2 to 5 per minute”, Spyrou said, proposing the face mask mandate for children both in and out of the classroom to be lifted.

President of the teachers’ branch council of the Isotita (Equality) trade union Alexios Savvidis described the “test to stay” as “an arbitrary and provocative measure, lacking scientific basis”.

It also confuses children, “violating children’s personal space and having an impact on both their physical and mental health as they are subjected to a frequent, distressing and morally questionable procedure,” he said.

EU, US pledge gas cooperation as tensions rise over Ukraine 9U